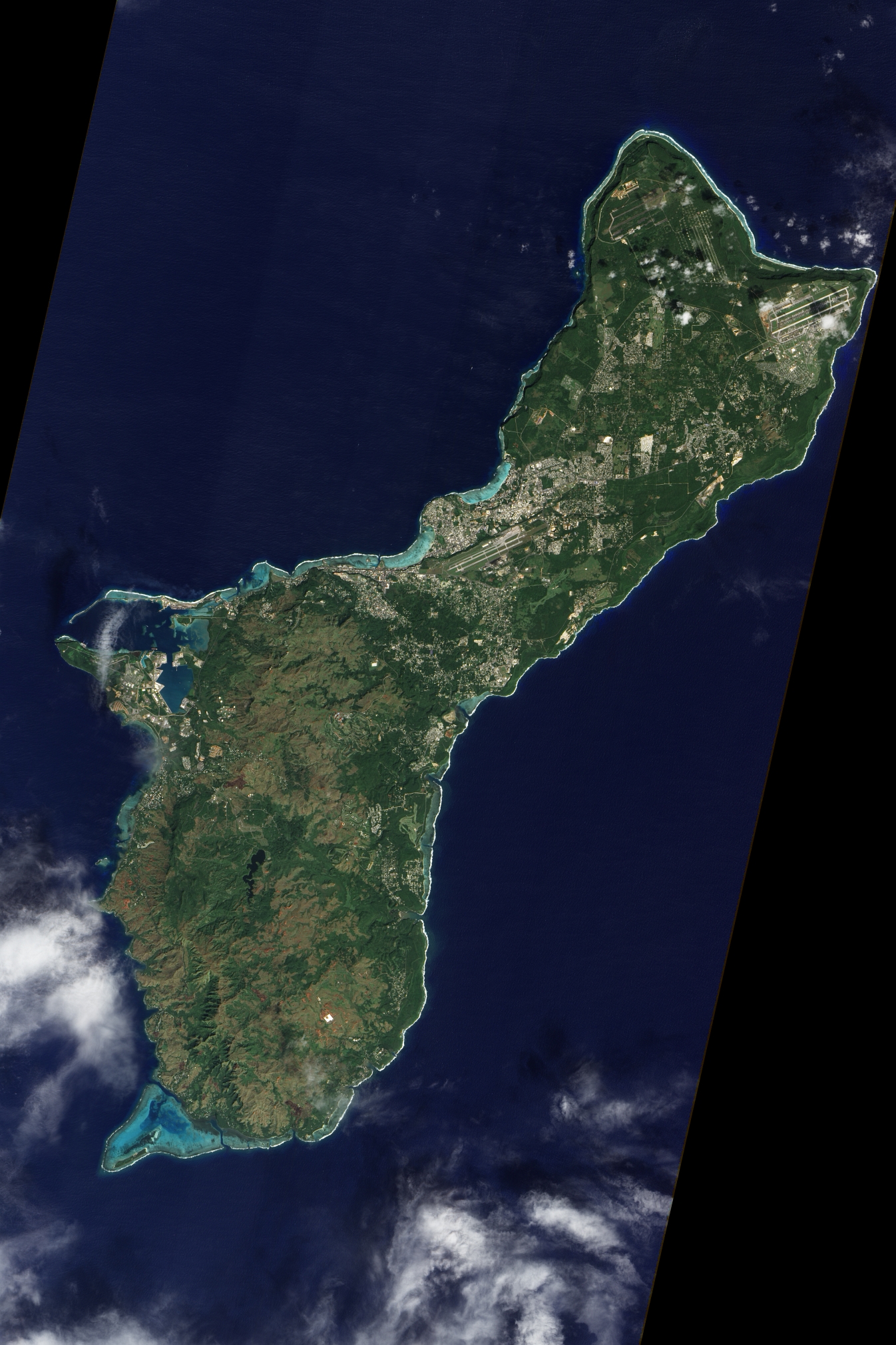 Question for FReeprs: Why two airports? One civilian, one military? What sorts of aircraft can land there?

When Guam tips over from all the new miltary equipment, which way will it fall? TIA

Correct! One is their international airport, the other is Andersen Air Base.

The airport to the NE is Anderson AFB. The one in the middle is the commercial airport... which can handle everything up to and including 747s. I understand they cut the top off a mountain for it.

There’s also a US Naval Base located on the island - on the western tip. Very interesting island - lots of Japanese tourism, very scenic.

What sorts of aircraft can land there?

All sorts...B52’s during Nam were out of there

Another question to those with knowledge of these things....

Most airports have two runways, approximately 90 degrees rotated from each other, and these don’t. Is this because the prevailing winds are always in one direction?

Interesting. My Dad’s home for a period of time during WWII.

Ah yes. Guam. My dad was stationed there in ‘47 and I went as an infant of 3 months old. (Holy crap! Am I getting old:()
Stayed until late ‘49. Don’t remember a thing. LOL! It was quite the Japanese “tourist” destination a few years before that too. LOL! Supposedly there was still a Japanese soldier hiding in the mountains until sometime in the ‘70’s I think. Man, I could have been picked off. I wasn’t. My sister remembers a lot about it since she was around 7 or so. Quonset hut living at it’s finest. The old films are hilarious.

Setting aside that infamous comment, you DO kinda have the feeling of precarious isolation out there - When flying out there, you can't escape the thought that you're airborne over a looong stretch of water, hoping that the compasses are all working properly! Even after that, you're technically perched on top of one of the highest mountains on earth since going 'downhill' means decent into the Marianas Trench. It's more than a little weird until you get used to it.

My Dad was there in WWII as well (July 1944), shooting at some of those Japanese tourists on behalf of the U.S. Marine Corps.

Guam has some of the niceist people and best snorkling in the world. The ecology however is an example of what happens when man tries to play God. What a mess.

And the Habu’s! That is one nasty snake.

Is that the brown snake imported from Australia. Taken over the island. IIRC Very poisonous.

One is Anderson, on the tip, the other is NAVAL AIR STATION Agana, which is SHARED with the international airport.

The naval base and the naval magazine are along the coast.

BTW, when I was stationed there in the early ‘70s, the people did NOT like HAOLIES and were extremely unfriendly. Violence was an every day affair.

I was thrilled to leave the place.

17 posted on 04/04/2013 7:45:59 AM PDT by ConradofMontferrat (According to mudslymz, my handle is a HATE CRIME. And I HOPE they don't like it.)
[ Post Reply | Private Reply | To 6 | View Replies]
To: lacrew
Most airports have two runways, approximately 90 degrees rotated from each other, and these don’t. Is this because the prevailing winds are always in one direction?

I’d love to go back, but a faster way than I went the last time.