The Economist has been fairly consistent in its stand that carbon dioxide emissions from man-made sources are the chief cause of global warming. But in an editorial this week, it sounds less certain.

Global warming predictions haven’t panned out as predicted in the past decade, but the why is a bit fuzzy, the magazine admits.

Greenhouse gas emissions have soared during the past 15 years, the magazine notes, with 100 billion tons of carbon having been added to the atmosphere between 2000 and 2010. Still, both air and ground temperatures during that time have remained virtually unchanged.

In fact, the editorial notes, surface temperatures have been at the bottom of the projected range of various models since 2005. If they remain flat, they will actually begin to fall below projections shortly.

“The mismatch between rising greenhouse-gas emissions and not-rising temperatures is among the biggest puzzles in climate science just now,” The Economist said.

But with global temperatures up by almost 1 degree Celsius in the last century, the magazine says, “the puzzle does need explaining.”

The Economist posits several theories that might explain why temperatures have leveled off.

Among them: a temporary lag between more carbon dioxide and rising temperatures between 2000 and 2010; the rising temperatures in the 1990s might have been an anomaly; or the climate is responding to higher CO2 levels in ways that scientists haven’t understood.

If the last possibility is true, the editorial notes, it “could have profound significance both for climate science and for environmental and social policy.” In other words, less drastic action would need to be taken to reduce carbon dioxide emissions than has previously been sought.

“Oh Gosh darn... so sorry about those $BILLIONS you wasted that could have gone to better things...”

RE: so sorry about those $BILLIONS you wasted

The wasting isn’t past tense any way we look at it. The Dems in Congress are fighting to impose a CARBON TAX even as I write this.

Could it be that the mainstream media are finally waking up to the reality that fewer and fewer people are buying into Al Gore’s global warming bull@hit?LOL

Watch out Economist, “Nobody expects the Global Warming Inquisition!” 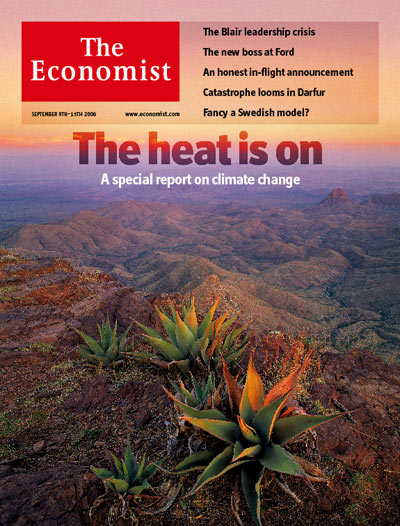 THERE IS NO KNOWN CAUSE AND EFFECT BETWEEN CO2 AND TEMPERATURE CHANGES !

8 posted on 04/01/2013 9:13:06 AM PDT by Graewoulf (Traitor John Roberts' Commune-Style Obama'care' violates U.S. Constitution AND Anti-Trust Law.)
[ Post Reply | Private Reply | To 1 | View Replies]
To: SeekAndFind
Go to the Weather Channel. They are still going full bore on the algore agenda. They find record busting everywhere and every weather phenomenon is touted as "unprecidented" or "extreme".

These are the guys that told us just a year ago "We will have to show our children pictures of snow" because they said it would never get cold enough to ever see the real stuff ever again.

Or maybe the trees grew faster and sucked up all that extra CO2.

Just like Newtons law of Physics states: For every action, there is an equal and opposite reaction.

Maybe the earth really is in balance.

They are just selling weather. Just like your local station:
“stay with us for beaking news” or 24 hour storm coverage.

I have noticed that when comparing my area’s record highs and record lows on the Weather Channel website approximately half of the record lows occured closer to today’s date than did the record highs. Sometimes by several decades. In short their own data doesn’t support their hype.

12 posted on 04/01/2013 10:10:29 AM PDT by gov_bean_ counter (Romans 1:22 Professing themselves to be wise, they became fools,)
[ Post Reply | Private Reply | To 9 | View Replies]
To: Thombo2
"Could it be that the mainstream media are finally waking up to the reality that fewer and fewer people are buying into Al Gore’s global warming bull@hit?LOL"

The MSM just witnessed AlGore (A.K.A. ManBearPig) sell his "Green" Cable Channel to one of the Biggest of Big Oil. Then he took that cash and exercised some serious stock options on Apple and thus entered the realm of the 1% of the 1%ers (A.K.A. the 9 Figure Rich).

They know they got rolled!

I cancelled my subscription to The Economist 10 years ago.

They have given up their traditional support for free-markets, free-trade, and limited government to follow the Keynesian central-planning and fashionable causes like “global warming.”

The guy that started the Weather Channel, John Coleman, is now a San Diego TV meteorologist (KUSI 51). He is very outspoken about the conniving and exagerations on his old network. He pretty much says they are sellling an agenda and have long ago quit doing weather.