John Kerry, who is expected to be nominated as secretary of state later this afternoon, has made frequent visits to Syrian dictator Bashar al-Assad.

Assad is now under fire for mass murdering his own civilians, as he fights an internal war to keep his position of power. Even Obama has called for Assad to go.

In February 2009, Kerry led a delegation there to engage Syria. Syrian President Bashar al-Assad told visiting US members of Congress on Saturday that the United States should ‘move away from a policy based on dictating decisions.’ Assad's guests on Saturday included US Senator John Kerry, who headed the third delegation this week to call on the Syrian president's door as Washington reviews its policies toward countries the previous administration regarded as hostile. Assad told his visitors that future relations should be based on a ‘proper understanding’ by Washington of regional issues and on common interests, SANA news agency reported,” AFP reported at the time.

AFP followed up with this report after the visit stating that Kerry believes "Syria is an essential player in bringing peace and stability to the region":

“President Barack Obama's administration considers Syria a key player in Washington's efforts to revive the stalled Middle East peace process, US Senator John Kerry said in Damascus on Thursday. ‘Syria is an essential player in bringing peace and stability to the region,’ Kerry, chairman of the Senate Foreign Relations Committee, said in a speech after meeting President Bashar al-Assad. ‘Both the United States and Syria have a very deep interest... in having a very frank exchange on any differences (and) agreements that we have about the possibilities of peace in this region,’ he said in the statement.”

Later, a couple months later, Kerry met again with Assad. "US Senator John Kerry met Syrian President Bashar al-Assad for a second time in as many months on Saturday for talks on ‘regional issues,’ the American embassy in Damascus said," reported the AFP.

And in 2011, when Kerry again wanted to go to Syria, his visit was blocked--by the Obama administration. “The Obama administration and France reportedly nixed a visit by U.S. Sen. John Kerry to Syria. Kerry (D-Mass.), the chairman of the Senate Foreign Relations Committee, has cultivated a relationship with the Syrian regime otherwise treated as a pariah in the West in the hope of drawing it away from Iranian influence. The Wall Street Journal reported Monday that Kerry had planned a visit last month, but the governments of the United States and of French President Nicolas Sarkozy blocked the visit out of concern that it would signal ‘Western weakness’ as pro-Iranian and pro-Western forces jockeyed for influence in Syria's neighbor, Lebanon,” reported the Jewish Telegraphic Agency in March 2011.

Here's a picture of their visit:

And here's a picture of John Kerry and his wife having dinner with the Assads:

Kerry praised Assad later in 2011 as being a "very generous" man. "Well, I personally believe that -- I mean, this is my belief, okay? But President Assad has been very generous with me in terms of the discussions we have had. And when I last went to -- the last several trips to Syria -- I asked President Assad to do certain things to build the relationship with the United States and sort of show the good faith that would help us to move the process forward," said Kerry at a think tank. 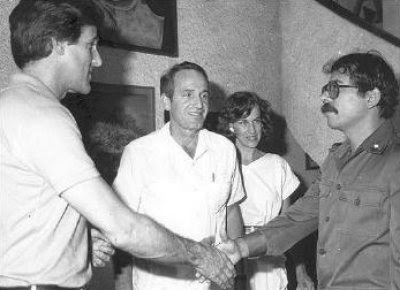 RE: #5, is that Dung heap Harkin in the middle?

Yes, that is Harkin,,who flew missions over Vietnam.

Oh, that’s right, he lied about that.

Even Nazi Pelosi went to Syria.. Remember that ‘WTF’ moment? Anything to smother America’s foreign policy, even if it means sleeping with the enemy.

If I recall correctly, Kerry had similar praise for the North Vietnamese butchers he met with in Paris 40 or so years ago.

Nothing to worry about. John has experienced quite a few concussions since then. Which of course explains his flips and his flops.

Did anyone mention that he also served in Vietnam?