The Transportation Security Administration (TSA) is tightening its grip on domestic travcel. I don't mean the random, unpredictable security checks at bus, subway and train stations which already exist. I mean a coordinated and systematic police control of internal travel within America. Groundwork is being laid.

Application to Make U.S. Into an Airport Screening Zone The application was tucked away on page 71431 of Volume 77, Number 231 of the Federal Register (November 30). It was surrounded by soporific references to forwarding "the new Information Collection Request (ICR) abstracted below to the Office of Management and Budget (OMB) for review and approval under the Paperwork Reduction Act (PRA)."

The application for funding from the TSA constitutes a preliminary step toward systematically expanding TSA's authority from airports to highways and almost every other means of public travel. The expansion would erase one of the last remaining differences between the US and a total police state; namely, the ability to travel internally without being under police surveillance. The total police state you experience at airports wants to spill into roads and bus stops, to subways and trains. Or, rather, the TSA wants to solidify and spread the fledgling and erratic presence it already has. The official request reads, "TSA's Highway BASE program [Baseline Assessment for Security Enhancement] seeks to establish the current state of security gaps and implemented countermeasures throughout the highway mode of transportation by posing questions to major transportation asset owners and operators." An example would be an owner and the employees of a long-haul truck company. The application continues, "Data and results collected through the Highway BASE program will inform TSA's policy and program initiatives and allow TSA to provide focused resources and tools to enhance the overall security posture within the surface transportation community."

Security Magazine (May 30th) offered a sense of how sweeping the definition of "assets" might be, including "trucking, school bus, and motor coach industries, privately-owned highway assets that may include bridges and tunnels, and other related systems and assets owned and operated by state departments of education and transportation."

At this point, the goal is merely "an assessment." But when did a government agency ever conclude that it didn't need funding, expansion and more power? This is especially true of the militarized TSA that treats the public as "hostiles."

The fact that the agency lamented the lack of a "single database" on public transportation is not reassuring. (Federal Register, Vol.77, No.104, pg. 31867, May 30.) The entire push seems aimed at not merely expanding but also centralizing information, efforts and authority, with BASE itself being a consolidation of several other TSA programs.

Private companies and public travel authorities will co-operate with this "voluntary" program of assessment and with whatever policies result. They will co-operate for two reasons: the stick and the carrot.

The stick: The BASE program is voluntary in the same sense that compliance with TSA demands at airport screening are voluntary - which is to say, not at all. A company that refuses to comply is likely to receive the same harassment and extra scrutiny as passengers who refuse to be screened.

The carrot: the May 30th Federal Register report listed one use to which data from the TSA assessments would be put. It would "inform...the most effective application of available resources, including funds distributed under the Transit Security Grant Program." In short, government money will flow to the compliant. The case of Amtrak is instructive.

On March 3rd, 2011, Trains: The Magazine of Railroading ran the headline: "TRAINS Exclusive: Amtrak police chief bars Transportation Security Administration from some security operations." The article went on to describe how TSA personnel "took over" an Amtrak station on their own authority and "thoroughly searched every person who entered." When Amtrak Police Chief John O'Connor found out, he was reportedly "livid" and insisted on restricting the TSA's authority before he would consider "allowing them back on Amtrak property."

How did Amtrak go from threatening to evict the TSA (an agency within DHS) to joining enthusiastically in the harassment of passengers? What happened in a year-and-a-half? Money happened. In 2011, Amtrak received $1.5 billion in federal funds and broke records with 30 million passengers; it still lost money. Amtrak's losses were so huge and persistent that one of Mitt Romney's campaign promises was to privatize the behemoth. By partnering with national security in October, however, Amtrak guaranteed both funding and survival no matter who won the election.

No wonder so many transit authorities are scrambling to be "golden." The Gold Award is the highest score a transportation provider can receive from the TSA. It is achieved by obtaining high ratings in 17 categories in Security and Emergency Preparedness. Who do you think will be first in line for federal hand-outs? Compliance with the TSA will be high.

The Amtrak dynamic also points to how the TSA will solve a major problem in monitoring internal travel; namely, it doesn't have enough personnel to cover the vast stretches and variety of internal transportation. The TSA doesn't need them. All it needs to do is co-opt the existing personnel of railroads and buses, of trucking and subways. If it does so, then the TSA will acquire 100,000s of de facto agents who are trained to report back on any suspicious activity or people.

Airport-style control of travel within America is coming. Some would argue it has been here for decades in the form of speed limits. But what's coming is different in kind. The unmarked police cars hiding in bushes are after your money; the uniformed TSA agents and their "partners" want your freedom, your obedience, and control of your life.

The Constitution will not protect the right to travel. Although many legal scholars consider it to be a Constitutional right akin to freedom of association, the word "travel" or its equivalent does not appear in the document except to guarantee the right of Congress members to travel back and forth from 'work'. The Supreme Court case Sáenz v. Roe (1999) rejected the Constitutional basis of free travel and rooted it instead within judicial precedent. These are weak roots and shallow soil.

Those who fret over their continued ability to travel abroad should glance over their shoulders to glimpse what is happening to travel within America. The two are politically connected, intimately so. Many of the same methods that now restrict foreign travel will be used within America because the same agency will handle both: the TSA in its many manifestations. They might be called BASE agents or VIPRs (Visible Intermodal Prevention and Response), like the ones who partnered with law enforcement in 2011 in Tennessee to conduct random "terrorist" checkpoints on highways. They may be the specially trained clerks who sell you a ticket . But TSA agents in whatever guise are coming to the highway, bus stop and train station you frequent.

Many of the same methods that now restrict foreign travel will be used within America because the same agency will handle both: the TSA in its many manifestations. They might be called BASE agents or VIPRs (Visible Intermodal Prevention and Response), like the ones who partnered with law enforcement in 2011 in Tennessee to conduct random "terrorist" checkpoints on highways. They may be the specially trained clerks who sell you a ticket . But TSA agents in whatever guise are coming to the highway, bus stop and train station you frequent.

The terrorists have won, as my father says all the time. I keep thinking back to Steppenwolf’s song, “Monster,” from 1969, “the police force is watching the people.” 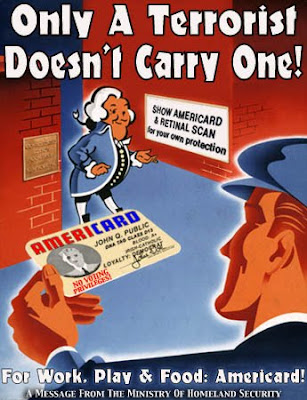 Once these jerkoffs have total control they’ll unionized and we’re screwed.

It’ll be impossible to get rid of them.

The police state grows. Who are your neighbors? Spatzi ????

The worst of terrorism is what is coming from our own government. Nothing terrifies me more than big, unchecked government. The states better start resisting.

Oh boy! I want to be Block Captain, just like it was in the good old USSR! So many neighbors I don’t like that I can turn in...cuz I don’t like them! Wowser!

Forward with the new People’s Democratic States of America!

Forward for our Lord and Savior, B.Obama!

You are one of my Fav-O-Rite Freepers.

They’ll be on the borders too, right? RIGHT?

14 posted on 12/13/2012 12:14:57 AM PST by Brad’s Gramma (Psalm 83)
[ Post Reply | Private Reply | To 1 | View Replies]
To: pallis
I expect a full blown balls to he walls violent gun grab from the Government any day now.
I expect them to use the national guard by order to ransack homes and kick in doors of
anybody suspected of owning a firearm for any reason. And expect them to place a reward
hotline in advance concerning information towards anybody owning a firearm. And once
being targeted by anybody who hates you, you will become the target of the forces to be.

Sue the Government? Ok, stand in line. But you'll have already lost your weapons and rights.
See you in court in five years after the fact.

Most Americans will sit idly by and allow this to happen because they will be told that
only criminals need guns, and any intervention or protest will be cause for arrest.

This can happen at any time, without any warning. And there isn't a damn thing
anybody will do about it accept die trying.


The new Governmental national army defense force is the TSA.
Unregulated and unapproachable/stoppable by any legal means, at all.
Don't think for one min that the Republicans will stop anything like this
from happening, because they know that eventually it will be their turn to
wield the scepter of POTUS-Power once again.

The TSA, ran by union thugs, has to do something to justify their jobs.

17 posted on 12/13/2012 1:59:25 AM PST by silverleaf (Age Takes a Toll: Please Have Exact Change)
[ Post Reply | Private Reply | To 9 | View Replies]
To: sourcery
Whining and sniveling is a waste of time...We didn't listen when there was still a possibility of doing something about all of this. That time is long past...

Just bend over and spread'em!

Americans are now outnumbered by those who rule, and those who want to be ruled, by about 55% to 45%.

Unless the concept of "thinning the herd" is adopted on a wide scale, we and our descendants are in for many, many centuries of tyranny on a scale of completeness that has never existed before.

Refuse them outside of the airport.

They have NO AUTHORITY to be on your highways or streets despite their assertions to the contrary.

Thanks for the Ping, LucyT.

OT, but: Love your research on the NBC issue, sourcery. Outstanding work.