First, let me say that I am about 90% confident Mitt will win. The "polls" are mostly skewed and I have a high confidence that the GOP efforts to root out illegal alien voters will have a BIG impact. But even having said that, I think we need to be prepared with some plans for what to do if the DemoCRAPS win (or steal) the election.

I think a Plan B has to start with an utter refusal to compromise and a solid dedication to conservative and Godly values on behalf of all Republican office holders. That is the LEAST we should expect. We also will need to keep building the Tea Party and keep holding the GOP's feet to the fire re: our principles. We also would need to PRAY A LOT.

I agree with you completely! May our God deliver us from this tyranny.

I hope we hold the house and get the Senate

You’re whistling past the graveyard. If Romney does win it will be major surprise.

The plan B is to fight for every single seat that somebody has to run an election on, big or small.

We’re not going to win every seat. We will, from time-to-time select disappointments, but we do not give up the fight.

Plan B: Move to Texas and join the secessionist movement.

I wish everyone was my age so they could see how similar this is to the Carter landslide.

It is so similar I almost expect to hear Rod Serling with a narrative lead in....

Here is what we do if Obama wins:

Step One: Put your head between your legs

Don’t nominate people like Romney in future. That way you don’t need a plan B... 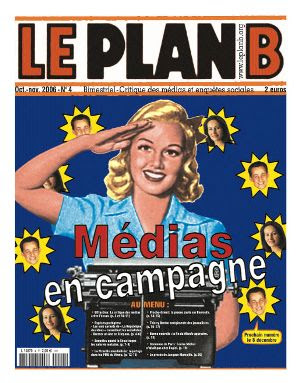 My Plan B is to move to the rightwingest dictatorship on the planet.

We get that catapult from History of the world part II, place Obama squarely in it....

We’ll need more than that, what we need is to remind Obama who we are. The freedom of speech that we have a right to must be used openly, loudly and aggressively if need be. I’m talking protests at the white house steps and across America. It’s time we send him and all his followers a signal, we will not sit idly and just talk about things. The whole turn the other cheek idea no longer works and it makes it look like they can step all over us and our country. I’m sorry but I honestly feel that any one who votes for Obama is truly un American and should be ashamed of themselves. We see Muslims protest all over the world against the US on an almost daily basis. When was the last time they saw Americans take to the streets and raise our voices against ANYTHING? Can you imagine if all Republicans took to the streets for a day. We have about 47 MILLION registered Republicans in the US. It’s time to put some fear in Obama’s heart, it should have been done a long time ago. That is what I believe plan B should be.....have him step down from office.

Costa Rica for me.

I agree. In a “fair” race, I believe Romney would win by a landslide. However, as we’ve already seen in this and many other elections, D’rats never play fair.

I would add to make sure to have plenty of rations/food reserves.

Unfortunately, in my state, there’s a lot of apathetic people in my state who don’t care to vote, not to mention there’s strong D’rat/union cronyism here. We did vote for a Republican governor once, so I believe there’s still some hope! ^_^

I fully expect Romney to lose; not because of theft or voter ignorance, but because of his unwillingness to win. I have said it before and I will repeat it again - Romney’s “victory” came in not allowing anyone else to get the nomination. He does NOT want to be President.

My Plan B is to get out of the GOP as soon as Wednesday after the election. In Delaware, it makes no sense to be a Republican because:
1. The party is run by RINOs;
2. They have no use for Conservatives and TEA Partiers;
3. Any candidate they run is either safe RINO or sacrificial lamb; and
4. Why bother identifying with the GOP when, in a vital election, they have two volunteers who don’t want help, don’t have phone banks set up yet and want to charge people for bumper stickers.

Romney was the best guy running....period...he wasn’t my fav but then again I still hoped for Fred Thompson...