"Absolutely not," Obama campaign adviser Robert Gibbs replied to "Fox News Sunday" host Chris Wallace when asked whether the administration was politically motivated when it initially mischaracterized the recent attack on the U.S. Consulate in Libya.

"No one either intentionally or unintentionally misled anyone involved in this," Mr. Gibbs said. "We learned more information every single day about what happened. No one wants to get to the bottom of this more than we do."

Some House Republicans have accused the president of intentionally misleading the public about the Sept. 11 attack in Benghazi that killed four Americans, including the U.S. Ambassador J. Christopher Stevens. No one misled over Libya attacks (Bagdhad Bob Gibbs resurrected!)

or they knew and tried to cover it up ,but I go with that they never had a clue what happened and still don’t

3 posted on 09/23/2012 8:59:40 AM PDT by scooby321 (AMS)
[ Post Reply | Private Reply | To 2 | View Replies]
To: markomalley
Gibbs may not be old enough to be who Tom Wolfe was lampooning in Radical Chic & Mau-Mauing the Flak Catchers but Gibbs is definitely of the 1960s Marxist-Alinsky campus psycho spoiled brats and their bratty ideological issue crowd.

Many masquerading as fact checkers in government and media are nothing more than flak chuckers protecting one of their own, Obama.

You initiated a policy to tolerate the Marxist-Alinsky radicals and let them rant; not only has it not ceased but was constantly augmented by decades of infiltration and indoctrination. You now have two Americas. In my opinion, it will not cease until a crisis shall have been reached and passed. "A house divided against itself cannot stand." I believe this government cannot endure, permanently, half statist and half free; I do not expect the house to fall; but I do expect it will cease to be divided. It will become all one thing, or all the other.

4 posted on 09/23/2012 9:01:08 AM PDT by WilliamofCarmichael (If modern America's Man on Horseback is out there, Get on the damn horse already!)
[ Post Reply | Private Reply | To 1 | View Replies]
To: markomalley
If everyne is confused "why" the Obama admin would do this knowing eventually the truth would come out its very simple.

You deny the story and make the denial the story rather than the fact an Ambassador died as part of a terrorist attack.

Then you wait for the sycophants in the Media to go "But look at Romney he didn't pay his taxes!"

And the other reason you deny the story is to stop the "ramp up".

If you can keep the narrative that "The Obama admin lied" well so what. So did every other Admin. Nothing to see here move along.

And thus you deny the compounding interest of Terrorists are attacking the US Embassies and Obama is doing nothing about it.

Another graduate from the fine Josef Goebbels Media College.

I guess that obnoxious kid Carney couldn’t lie well enough, so they had to call in the master.

President Nixon was run out of office because his administration supposedly lied about a bungled attempt to sneak a peek at some Democrat papers. The Obama administration is lying and attempting to cover-up their incompetence in Libya that resulted in the deaths of at least four Americans including a United States Ambassador who represented all of us. People died and Obama lied. Obama should be run out of office! Where are the front page Washington Post articles? Where are Woodward and Bernstein? Where is Robert Redford? 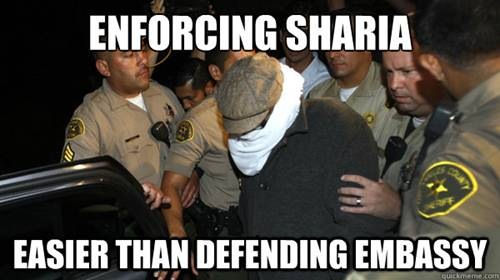