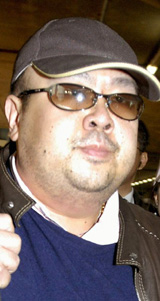 Former North Korean Leader Kim Jong-il's eldest son Jong-nam has said the isolated regime will eventually fail with or without reforms. The comment appears in e-mail conversations exchanged over seven years between Kim Jong-nam and a Japanese journalist and obtained by the Monthly Chosun.

The nearly 100 e-mails were sent from 2004 until December last year to Yoji Komi, an editor at the Tokyo Shimbun daily. The two also spoke in person in January and May last year.

Kim Jong-nam, who was passed over for the leadership in favor of his younger brother Kim Jong-un, expresses doubts about his brother's ability and the dynastic succession in general. "I'm concerned how Jong-un, who merely resembles my grandfather [former North Korean leader Kim Il-sung], will be able to satisfy the needs of North Koreans," he wrote. "Kim Jong-un is still just a nominal figure and the members of the power elite will be the ones in actual power."

Kim added that his father had originally intended to halt the hereditary transfer of power, saying it would only damage his and his father's "accomplishments." But he changed his mind because he came to believe that the Kim family bloodline was necessary to maintain the stability of the North Korean regime. Kim Jong-nam said even North Korea's sole ally China is less than enamored of the situation. "Rather than welcoming the hereditary succession, China is merely acknowledging it for the sake of maintaining stability," he said. "The dynastic succession is a joke to the outside world."

Kim also commented on North Korea's deadly shelling of Yeonpyeong Island in 2010. "It was a provocation by North Korea's military to justify their status and existence and the possession of nuclear weapons," he said. When asked about his thoughts on the sinking of the South Korean Navy corvette Cheonan, Kim said, "From North Korea's perspective, there was a need to stress that the area surrounding [the five northernmost South Korean islands in the West Sea] is a war zone." He added, "That is how the songun (military first) doctrine and the development and possession of nuclear weapons are justified."

Kim said he fell out of favor with his father because of his insistence on reform. "After I went back to North Korea following my education in Switzerland, I grew further apart from my father because I insisted on reform and market-opening and was eventually viewed with suspicion," he recalled. "My father felt very lonely after sending me to study abroad. Then my half brothers Jong-chol and Jong-un and half sister Yeo-jong were born and his adoration was moved on to them. And when he felt that I'd turn into a capitalist after living abroad for years, he shortened the overseas education of my brothers and sister."

Kim said he told his father what was on his mind whenever he got a chance. "I told him honestly how the international community was concerned about the nuclear tests and missile launches and I am asking him to train my brother [Kim Jong-un] well in order to ensure a good life for the people." Asked about his relations with his aunt Kim Kyong-hui and uncle Jang Song-taek, who are the patrons of the new leader, he said, "I still have good relations with them and they are fond of me. They pay special attention to me."

Startlingly, Kim Jong-nam said he had never met the new North Korean leader. "I'm his half brother, but I've never met him so I don't know," he said. But he said he saw their middle brother Jong-chol a few times overseas. "The Kim Jong-un regime will not last long," he said, expressing concerns about his brother's young age and utter lack of experience in government. He forecast a power struggle between different factions.

Kim warned, "Without reforms, North Korea will collapse, and when such changes take place, the regime will collapse." He added, "I think we will see valuable time lost as the regime sits idle fretting over whether it should pursue reforms or stick to the present political structure." Kim said the North's hardline stance stems from a political system bent on "survival" and added that Pyongyang will never give up its nuclear weapons.

Kim said he is being watched over by the Chinese government. "The Chinese government is protecting me, but it is also monitoring me too. It's my inevitable fate. If you can't avoid it, it's better to enjoy it." He said, "Because I was educated in the West, I was able to enjoy freedom from early age, and I still love being free. The reason I visit Macau so often is because it's the most free and liberal place near China, where my family lives." 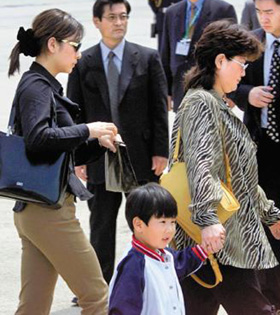 From right, former North Korean leader Kim Jong-il's eldest son Kim Jong-nam's wife, his eldest son and his secretary walk out of Narita Airport in Japan on May 4, 2001, when Kim was caught with a forged passport. /Mainichi Shimbun

Kim admits his playboy lifestyle. "I don't deny my philandering habits, but I have only one wife, and my wife is the person I love the most in the world." When he was arrested in Japan trying to enter on a false passport in 2001, "the woman who was holding the hand of my young son [Kum-sol] is my wife. The young woman with glasses next to her was my secretary," he said.

He said it was "common” for the North Korean elite at the time to travel abroad with forged passports, and "I went to Japan many times to go to famous hotels and restaurants in Tokyo. Jong-un also went to Japan with a fake Brazilian passport."

Because he loves to drink, he said he is suffering from gout and taking medication.

Asked about his son Han-sol, whom he had with a mistress in Macau and who became the center of a media storm in October 2011, Kim said, "He is adventurous, so he chose to go to an international school in Mostar in tension-filled Bosnia. I had to accept his choice, but I’m concerned now."

Yoji Komi was the Seoul correspondent for the Tokyo Shimbun and then dispatched to Beijing in 2004. A serendipitous encounter with Kim in Beijing Capital International Airport in September that year was the beginning of their relationship. The conversations started when Kim sent Komi an e-mail in December 2004.

They were not in touch for several years, but conversations started again when Kim sent an e-mail to Komi asking for a favor in October 2010. More recently, Kim agreed to publication. "I will answer all questions. Please get my thoughts in good order and publish them at a suitable time," he wrote.

2 posted on 01/16/2012 11:28:53 PM PST by TigerLikesRooster (The way to crush the bourgeois is to grind them between the millstones of taxation and inflation)
[ Post Reply | Private Reply | To 1 | View Replies]
To: TigerLikesRooster

Indeed, it would be very interesting to have a conversation with this chap....

Thanks TigerLikesRooster. A good read.

If fate were to create some twists and turns for the North Koreans, it would probably benefit them to end up with this guy running the place. Of course they would probably kill him first.

-——there was a need to stress that the area surrounding [the five northernmost South Korean islands in the West Sea] is a war zone.-——

While perhaps not actually justifying the shelling, the rational does make sense. The Koreas are at war. That is a very important statement never before conveyed to me.

I think this was one of your best posts.

It seems believable and is the word of what seems to be a very rational person. Then there is his relation with China. If true, he might be the answer to what is to be. Given that History takes time, it may be that his day is coming when the current mess disintegrates.

8 posted on 01/17/2012 9:52:50 AM PST by SevenofNine (We are Freepers, all your media belong to us ,resistance is futile)
[ Post Reply | Private Reply | To 1 | View Replies]
To: TigerLikesRooster
"My father felt very lonely after sending me to study abroad.

OHHHH we knew that all long here on FR LOL!

Followup
Woman accused of killing Kim Jong Nam released from prison
NY Post ^ | 5/3/2019 | Lia Eustachewich
Posted on 5/3/2019, 9:38:06 AM by Eddie01
A Vietnamese woman accused of killing Kim Jong Un’s half-brother with a nerve agent was headed home Friday after serving time behind bars for the stunt.
Doan Thi Huong’s release from a Malaysian prison caps the two-year case — which means it’s likely no one will ever be convicted in the brazen, broad-daylight assassination of Kim Jong Nam.
In a stunning move, prosecutors dropped murder charges against Huong and her co-defendant, Indonesian Siti Aisyah, who was released from custody in March. The two women were accused of smearing the deadly VX nerve agent on Kim Jong Nam’s face at Kuala Lumpur International Airport on Feb. 13, 2017.
Huong, 30, sought to be acquitted but prosecutors denied her request. She pleaded guilty last month to a reduced charge of causing injury and was sentenced to 40 months in prison from the day of her arrest, Feb. 15, 2017. She was released early for good behavior.
[snip]
(Excerpt) Read more at nypost.com ...