In an exclusive interview with ABC’s Jake Tapper, Obama essentially said that, if he could redo the first few years of his presidency, he wouldn’t have made a single decision differently.

“I guarantee it’s going to be a close election [in 2012] because the economy is not where it wants to be and, even though I believe all the choices we’ve made have been the right ones, we’re still going through difficult circumstances,” the president said.

Sheesh. More power to a person for confidence and conviction, but no doubts? No second guesses? No mistakes to regret or amend? Must be nice.

Let’s focus on just one of the major messes Obama has made. I’ll pick Obamacare, because, in his interview with Tapper, O explicitly doubled down on his support for it, a cumbersome and over-reaching piece of legislation if ever there was one.

“The health care bill that we passed is absolutely the right thing to do, but it’s going to take a while before it’s even fully implemented, much less taken full effect,” he said.

Absolutely the right thing to do? The president must have forgotten the circumstances of its passage because, elsewhere in the interview, he implies that legislators ought to be responsive to the will of the people. If he’s to have any credibility at all as he pleads for passage of the American Jobs Act on the basis that a majority of Americans supposedly support the individual elements of his proposal, then he has to at least admit it was a mistake to pass the most unpopular entitlement program in U.S. history against the clear mandate of the electorate.

Man, this guy really is delusional!

Didn’t the MSM spend much of its time starting around four years ago trashing GWB for being too stubborn to admit any mistakes? Or did I just dream that?

If you want to destroy the country. Then they are the right ones.

Boama is wrong for this country.

A system of government where the least capable to lead are elected by the least capable
of producing, and where the members of society least likely to sustain themselves or
succeed, are rewarded with goods and services paid for by the confiscated wealth of a
diminishing number of producers.

“...though I believe all the choices we’ve made have been the right ones, we’re still going through difficult circumstances,”

He is vain almost to the point of narcissism, unable to resist peeking at himself in every mirror he passes.

Obama. There could not be a more arrogant prick walking the earth right now... 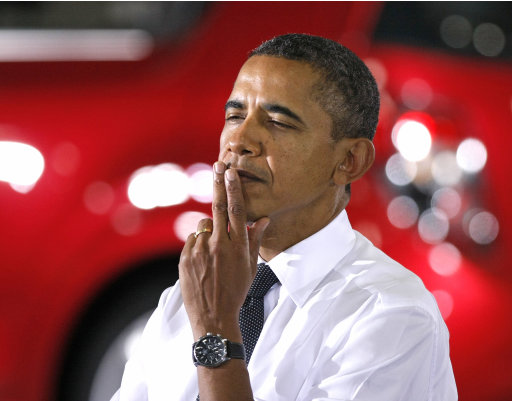 Yep, it all has to do with what your presuppositions are.

If your presupposition is
“once the entire world is communist, everything will be perfect”,

then, yes, they’ve made all the “right” decisions.

It's called "Idiocracy" and there was already a documentary movie of the same name made about it.

If he weren’t so descructive I’d feel sorry for his stupidity.

That’s what most people don’t understand.

Keep in mind that The Won has been raised from his earliest days to hate this country, freedom and Western Civilization.

With that as background, everything he does makes perfect sense.

"Obama: “All the choices we've made have been the right ones”"

That Clown must have access to some really great weed, and in a large supply too! Dammed Social Bass Turd, I wouldn’t Pi$$ in his face if he was on fire!

America is waking up to the fact that we have a president who really hates our country, and wants to destroy it.