Radioactive wild boars are on the rise in Germany, where they have attacked and frightened residents, even snarling traffic when they gang up on roadways, according to Spiegel International Online and numerous other media reports over the past couple of weeks.

Their radioactivity stems from Ukraine's Chernobyl nuclear meltdown, which happened way back in 1986, but contaminated much of Europe. Apparently the nuclear contamination is still detectable in some animals, including Germany's wild boars.

The Spiegel report mentions that German government payments compensating hunters for lost income due to radioactive wild boar meat have quadrupled since 2007. Last year alone, $555,000 was paid to hunters who found themselves with inedible boar meat, due to its radioactivity. The hunters would have otherwise sold the meat, but it was deemed unfit for human consumption.

But the problem isn't just radioactivity. Despite the contamination, wild boars are multiplying in record numbers.

"In the last couple of years, wild boar have rapidly multiplied," a spokesman from the Environment Ministry told Spiegel Online. "Not only is there more corn being farmed, but warmer winters have also contributed to a boar boom."

The German Hunting Federation supports this claim. During the 2008/2009 hunting season, approximately 650,000 wild boar were shot, breaking previous records for such kills. Only 287,000 were shot the prior season, suggesting that fewer of these animals were around for the competitive hunters to target.

Wild boar remains a popular meat in Germany, where it's found in everything from stews to meatballs. Diners don't seem to be too deterred by the nuclear contamination scare, but the governmental reports on the meat aren't very appetizing. Spiegel mentions that Germany forbids anyone to sell meat containing high levels of radioactive caesium-137, meaning that animals with contamination levels of 600 becquerel per kilogram or higher must not be eaten. Some meat in Southern Germany has been measured at 7,000 becquerel per kilogram, however.

"In the regions where it is particularly problematic, all boar that are shot are checked for radiation," Andreas Leppmann, from the German Hunting Federation, told Spiegel.

Hunters aren't idly standing by. They've found a concoction called Giese salt that supposedly causes wild boar to excrete radioactive substances after the animals have ingested the salt. Work performed in Bavaria, according to the Bavarian Hunting Federation, indicates the salt does the trick, presumably allowing the meat to pass government inspections.

It's already been 24 years since the Chernobyl nuclear disaster, but experts are predicting the problem of radioactive wild boars will plague Germany "for at least the next 50 years."

Radiation can do some strange things to animals ...

I for one welcome our new radioactive wild boar overlords.

Might make for interesting night-hunting. Do they glow in the dark?

Better a radioactive wild boar than an unscintillating crashing bore like Dear Reader.

Wow, and I thought feral pigs invading the Midwest was a problem, but they don’t glow in the dark or anything...

Cool... hunting glow in the dark pigs at night without spotlights...

Years ago while training at Knolls Atomic Power Laboratory, an instructor told us of a worker that set alarms off on some radiacs on the day he returned from vacation. Rather than finding him externally contaminated, the contamination was internal. It discovered that his vacation was a hunting trip in Canada, and the deer meat he had been eating had isotopes traced to Chernobyl. He ate the rest of the meat anyway. 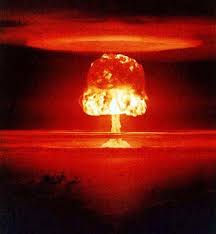 Yes, but don't hit them in the wrong spot.

I think that they can cook themselves ...

We have plenty, can we export them?

So much for the theory that radiation impairs fertility.

Oregon export grain is required to be tested for radioactive particles because it is in the range of the Chernobyl fallout plume. Radioactivity goes beyond 25 years.

16 posted on 08/04/2010 7:15:31 PM PDT by Cheburashka (Another great rock and roll band name: The Radioactive Wild Boars.)
[ Post Reply | Private Reply | To 1 | View Replies]
To: DogByte6RER
Apparently the nuclear contamination is still detectable in some animals

This is so uninformative. The difference between what is detectable and what is actually harmful is about ten orders of magnitude. Idiot press following idiot environmentalists following fear mongering soot loving anti-nukes.

The fewer rads in my BBQ the better.

I would imagine the kind of Chernobyl fallout would contaminate the ground for ages. Far beyond 25 years anyway. Any animal that eats any plant matter grown there - corn, hay, grains etc, is going to show some exposure.

Ever seen photos from Pripyat? Eerie.

If they can do it for ants and rabbits, imagine what happens when they start out with something already scary.