ACORN -- the Association of Community Organizations for Reform Now -- is stinking up Washington.

And this is far more significant than if a suspiciously large number of operatives for a purely "private" outfit had been found systematically bending and breaking the law, because ACORN receives and spends taxpayer money -- lots of it -- and had carried the imprimatur of official partnerships with the IRS, the Census Bureau ... the kind of "cred" that in the political world comes only from "who you know." Dirty Harry is a criminal type politician and probably was getting some big bucks from ACORN for re-election. Has to stop any probe he can.

“ACORN's Recent History With Prostitution (who'd have thought..)
Perhaps we shouldn't have been completely surprised by the videos we've seen of ACORN workers offering assistance to prostitution rings.

I mean, there was Cincinnati . . .
Shari Bell, 41, of Walnut Hills was arrested Wednesday night by Cincinnati police, reported WCPO, NewsChannel5's Cincinnati sister station.
Bell allegedly approached an undercover officer's car in Evanston and offered him sex for money. Police also said they found a crack pipe in Bell's coat pocket.
Bell told police she works for the Association of Community Organizations for Reform Now at the time of her arrest.

And then there was Cleveland:
An Ohio man who cast an illegal early ballot after being caught registering to vote several times with ACORN is a longtime scammer who was arrested last year — as a woman.
The bizarre tale of Darnell Nash — a k a Serina "Sexy Slay" Gibbs — came to light after Cuyahoga County election officials charged him with voter fraud and this week turned him in to prosecutors.
It turns out that Nash, 24, who has a criminal record as a man, is now a transsexual escort who claims to make $150 an hour turning tricks as the self-proclaimed "Queen of Cleveland Gender Benders."
Maybe this really is just another day at the office for the folks at ACORN . . .

UPDATE: Then there's Milwaukee:
At least seven felons convicted of crimes including cocaine possession and robbery were recruited by a liberal group to register voters in Milwaukee,
raising fears they may have committed voter fraud . . .
Along with the seven felons, court records show one special registration deputy has a pending felony charge for heroin possession and another is facing a misdemeanor prostitution charge. A third was convicted of misdemeanor prostitution. “

Now, I guess, we know what a community organizer does, because today we learned, an ACORN Brothel Grows in Brooklyn.
When we last saw our fake pimp and hooker, they were in our nation's capitol trying to
find out how ACORN would deal with people looking for a home mortgage so they can open open up a brothel using under-aged girls. " 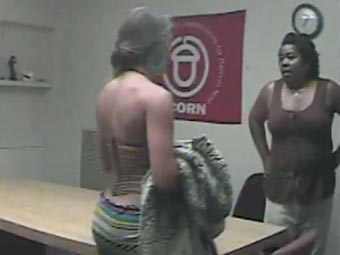 
"ACORN SCANDAL: International Press Roundup (MEXICO) Girls
from Mexico/E.S. to U.S. for Prostitution
"Trabajo encubierto exhibe ilícitos de empleados de la ACORN;
Llevan a EU niñas de México y El Salvador para prostituirlas"
They have girls from Mexico to the United States and El Salvador for Prostitution
Antonio Heras Antonio Heras Corresponsal Correspondent Mexicali, BC, 17 de
septiembre. Mexicali, BC, Sept. 17. An undercover work done by Hannah Giles and
James O'Keefe, activists, human rights advocates, revealed illegal actions of
employees of the Association of Community Organizations for the New Reform
(ACORN, for its acronym in English), who advise the import United States of girls
from Mexico and El Salvador for prostitution in the neighboring country and profit
from it.

The ACORN, nongovernmental organization dedicated to the support of migrants and
highly marginalized people to acquire home ownership in the U.S., announced it will
initiate an independent investigation to determine responsibilities of its employees."

"ACORN SCANDAL: International Press Roundup (NORWAY): "Obama-Support Group Helps Fake Whore/Pimp" "Obama-Støttegruppe Felt Av Falsk Hore Og Hhallik"
a video camera has revealed how people in the U.S. umbrella organization Acorn has
been willing to provide support to illegal projects.
Obama-aid Lobby group, which supports low-and middle-income groups in the housing
wage and tax issues, was under the election campaign last year, accused of election
fraud after a sub-organization had a mission to register voters worth 800 000 dollars
for Obama. "

"The E. F. Hutton of Prostitution: When ACORN Talks, Pimps and Hookers Listen.
The radical activist group ACORN is the E. F. Hutton of prostitution. It stands ready to provide discreet advice
on setting up a brothel and engaging in other, associated acts of criminality. When ACORN talks, pimps and hookers listen.
In Baltimore, ACORN staff assured O’Keefe and Giles that the group doesn’t “discriminate” — i.e., has no standards whatsoever.
Giles is told if she makes $96,000 a year selling sex, she should tell the government she only makes $9,600.
O’Keefe notes that they want a house for 13 underage girls who will be imported from El Salvador to work as prostitutes.
Only three — not all 13 — of the girls can be listed as dependents, ACORN prudently advises. "

"ACORN Prostitution Scandal:San Bernardino VIDEO This Time W/Politicians and Murder
When we last saw our fake pimp and hooker, they were in Brooklyn, with the usual scenario,
trying to find out how ACORN would deal with people looking for a home mortgage
so they can open open up a brothel using under-aged girls.

Today's stop is San Bernardino, California. In this Acorn office we find out the woman who runs the office is also a poll dancer
who may turn tricks on the side. ACORN's is supposedly non political but acording to Teresa,
the woman on the tape helping the pair, she speaks with Congressman and Senators every day because
she is lobbying for the Obamacare bill. She names Barbara "Call Me Senator "Boxer and Senator McCleod,
and 62nd district Assemblywoman Wilmer Amina Carter as people with whom she deals.
Theresa says that “Eden’s” prostitution money would be an asset to James in his quest to become a Senator or Representative.
Also the person who was helping the alter egos of James O' Keefe and Hannah Giles with the prostitution scam
also talks about how she first planned the cover-up then shot and killed her husband."

James O’Keefe and Hannah Giles visited one of ACORN’s New York offices in August,
where they picked up handy tips on how to lie on housing forms to cover up a prostitution business
(”Honesty is not going to get you the house,” one ACORN official advises) and how to hide cash
from their illicit business (”When you buy the house with the backyard, you get a tin…
and you bury it down in there…cover it…and put the grass over it…”).

In 1994 the ACORN Housing Corporation (AHC) was awarded a $1.1 million grant
by AmeriCorps, a program of the Corporation for National Service (CNS). The money was intended
to fund the training of 42 AmeriCorps members in 13 cities. The workers were expected to identify
low-income families hoping to purchase a first home, to assist them in finding suitable housing, and to
advise them in securing the necessary financing.

AHC’s initial subterfuge pales in comparison to the illegal fundraising scheme it subsequently operated,
using its AmeriCorps grant to increase ACORN’s membership.
According to Jordan, one ACORN member in the Dallas regional office stated that “the only reason
for having the AmeriCorps program was to gain new ACORN members, and that if AmeriCorps loan
counseling clients did not start becoming ACORN members, she could and would halt the AmeriCorps project.”
Jordan found that this understanding was not limited to the Dallas office.
Using government funds to solicit membership in an organization that— like ACORN—participates in
direct political advocacy is a violation of federal guidelines."

"ACORN: Big Apple, Big Pimping (another shoe drops)
It was just a fluke, ACORN insisted the first time that James O’Keefe and Hannah Giles
published their undercover video showing their office in Baltimore helping a pimp evade taxes
and get a mortgage by deceit for a brothel. They fired a couple of “bad apples” in that office,
and a couple of more bad apples in Washington DC when that office got caught on hidden camera
doing the same thing. In fact. ACORN went so far as to brag that the pair had tried the same thing
and failed in “San Diego, Los Angeles, Miami, New York, Philadelphia to name a few places.”"

What’s ACORN got on Reid? Maybe how certain election results were “arranged”?!!

Anyone talking money from ACORN ought to be exposed!

I don’t want OUR tax dollars being funneled into any campaigns!!!

Exactly. It was ACORN's/SEIU's strong arm tactics in Nevada which helped cheat Hillary out of the nomination.

Doesn’t matter what he does from this point on....he is going definately going down . Unless Acorn is willing to pay him back with a little voter fraud?!

I have a feeling that were it not for voting 'dirty tricks' this guy would have been history a long time ago.

Nevada voters can't be that dumb!

11 posted on 09/25/2009 5:21:24 AM PDT by moondoggie
[ Post Reply | Private Reply | To 1 | View Replies]
To: Kimberly GG
Reid and Pooploosli are both well aware that they need to stop any “investigations” because they know full well that the voter fraud issue will hit every state that normally goes “R” and went “D” this election.

This scandal will go all the way to the White House and they know it.

It doesn't matter if he is reelected or not. If he is reelected, he just keeps on keeping on. if he is defeated, he just changes his business cards to read lobbyist. Long serving former Senators and Representatives do not ‘go home’ they just trade the money and power of Congress to super money and a different kind of power as lobbyist.
Trent Lott, John Breough (sp), Tom Dashle, Patsy Schroeder and a few others come to mind.
Our ruling class!

Give me a break. President of the Senate going down? That's a huge drop in power.

Are the people of Nevada fed up with him or not?

Reid is vulnerable in the next election and this isn’t likely to sit well with the “folks back home”.

Buh-bye, Hairy, don’t let the door hit you on your way out of D.C.

(We’ll take care of that for you, Harry.)

So, investigate Humana for “misleading” it’s clients about Obamacare but an investigation of ACORN, which has been caught breaking the law, is out of the question. Some values there, Democrats.