With that in mind, say hello to the B.E.A.R. — the Rio Grande Valley’s newest tool to fight potentially violent standoffs and manhunts.

The armor-plated vehicle stands more than 12 feet tall and can carry at least three six-member SWAT teams inside — or rescue 35 schoolchildren.

A detachable battering ram at the front of the vehicle promises to smash through suspected drug cartel members’ reinforced lairs or other structures. Eight openings in the B.E.A.R.’s bulletproof walls and windows give law enforcement the ability to return fire.

The vehicle is designed to withstand armor-piercing rounds, grenades — even roadside bombs like those seen by troops fighting in Iraq and Afghanistan.

A turret that rises through the B.E.A.R.’s ceiling even allows officers to mount a machine gun, if needed. “It’s a real neat vehicle,” Hidalgo County Sheriff Lupe Treviño said.

Treviño defended the purchase, given that no local money was spent — the U.S. Department of Homeland Security gave the sheriff’s office a $1.6 million Operation Stonegarden grant to cover the cost last year. Stonegarden funds go to local law enforcement to fight border violence.

“The people of Hidalgo County did not have to lay down one cent for this,” Treviño said.

Most larger law enforcement agencies across the country have vehicles to quell standoffs, with the B.E.A.R. providing cover when they turn violent. Beyond protecting the cops, the vehicle can also be used to rescue hostages.

Pittsfield, Mass.-based Lenco Industries Inc. has sold about 500 of the B.E.A.R. vehicles and its smaller variant, the BearCat, since its inception in 1999, company president Len Light said.

Lenco’s customers initially came under criticism when the vehicles started rolling out because of their cost, Light said. But in the past decade, no firearm or explosive has breached the Lenco vehicles’ armor.

“These have been lifesavers,” he said.

Armed standoffs are not part of daily life in the Valley, but they have occurred, and with the B.E.A.R., “you know your men, your SWAT team and the public is going to be secure,” the sheriff said.

“Hopefully we’ll never have to run up against that,” Treviño said of armed standoffs. “But, you never know.”

The B.E.A.R. also comes equipped with an infrared camera that will allow SWAT teams to hunt down criminals who may be hiding out in rough terrain, even at night. State and federal helicopter units use the same technology during manhunts along the border.

Treviño said the B.E.A.R. will be available for any law enforcement agency in South Texas to use in hostile situations — should the need arise.

Gabe Hernandez | gabrielh@themonitor.com
The B.E.A.R. vehicle will be used by law
enforcment to respond to dangerous situations
where high powered weapons are involved
Thursday afternoon in Edinburg.
1 posted on 09/08/2009 11:50:21 AM PDT by SwinneySwitch
[ Post Reply | Private Reply | View Replies]
To: SwinneySwitch
Looks a lot like an MRAP. 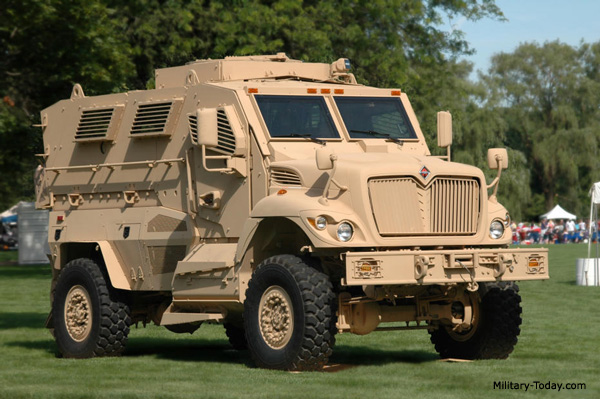 Why the hell do the police need full-on military equipment like we drive in Afghanistan or Iraq?

This sheriff is not an honest person.

The guy who came up with that statement probably took a class in creative grantsmanship writing. Law enforcement wants its toys, and will say anything in order to get what it wants...

The city of Glendale, AZ got one of these a few years ago.

What the heck for?

So they can safely drive right up to the front door of an under-attack school and demand via the loudspeaker that the miscreant surrender, instead of having to huddle behind cars out in the parking lot.

Except for what they paid in Federal taxes.

And what their children and their grand-children's great-grandchildren will pay in taxes to fund the interest payments on the debt that was run up to pay for this.

$346K , I could have bought a used armored car for $20K and basically had the same thing after putting in some windows.

There’s at least one rebuilt Sherman in the valley.

In case they want to hold another cook out for the Branch Davidians.

Exactly.
They threw in the gratuitous “for the children” to sweeten the deal.

Cops want their toys.
And they want to USE them.

Of course taxpayers paid for this. But if I were a sheriff’s department and I had heavily armed narcotraficantes coming across the border into my county, I would want one of these, too. They would have been foolish to turn it down. In fact, I can’t think of a safer way to drive on the Beltway, but DHS isn’t offering to buy me one. Dang.

I don’t know what’s going on in Glendale, but South Texas is a war zone because of the drug- and people-trafficking there. I don’t blame them a bit.

This can be used to demonstrate the wonders of 0bamaCare(TM) to interested people,
and to bring it to those who are not interested.

Because American men are a resourceful lot and when they go bad they can be pretty good at it, throw that in with the possibility of well trained commandos sent in by international Islamic terrorist groups and having one of these available for the region doesn’t seem so unreasonable.

A protective, armored vehicle seems reasonable, especially this close to the border where the Mexican army is engaged in small unit combat involving grenades and automatic weapons, our law enforcement has been forced to retreat without engaging many times already.

Being a multicultural nation we have to be prepared to enter shopping malls and school yards with an explosion resistant vehicle to rescue the groups of women and children that Muslims consider juicy, desirable targets.

Great, now they can break down somebody’s front door with a tank. Why don’t they just make the police force an arm of the National Guard, give them whatever military weaponry and armored vehicles they desire and get it over with. It’s becoming that way anyway.

Yes, but they’ve got to come outside that thing at some point.

18 posted on 09/08/2009 12:23:08 PM PDT by mrmeyer ("When brute force is on the march, compromise is the red carpet." Ayn Rand)
[ Post Reply | Private Reply | To 14 | View Replies]
To: SwinneySwitch
The vehicle is designed to withstand armor-piercing rounds, grenades — even roadside bombs like those seen by troops fighting in Iraq and Afghanistan.

Yes, because all those things are American law enforcement problems which desperately need a solution.

Why, just yesterday our local PD had to replace a patrol car taken out with an IED. And don't get me started on the number of hand grenades we get every day!

If so many police officials long to be part of a military unit, then THEY SHOULD JOIN THE MILITARY!

19 posted on 09/08/2009 12:25:59 PM PDT by TChris (There is no freedom without the possibility of failure.)
[ Post Reply | Private Reply | To 1 | View Replies]
To: SwinneySwitch
Theo: [sees LAPD SWAT armored vehicle approaching] Wait a minute, wait a minute. What have we here, gentlemen? The police have themselves an RV. Southeast corner.

Theo: [laughing as a LAPD SWAT armored vehicle is hit with a missile] Oh my God, the quarterback is TOAST!