With tensions already rising due to the Chinese navy becoming more aggressive in asserting its territorial claims in the South China Sea, the U.S. Navy seems to have yet another reason to be deeply concerned.

After years of conjecture, details have begun to emerge of a "kill weapon" developed by the Chinese to target and destroy U.S. aircraft carriers.

First posted on a Chinese blog viewed as credible by military analysts and then translated by the naval affairs blog Information Dissemination, a recent report provides a description of an anti-ship ballistic missile (ASBM) that can strike carriers and other U.S. vessels at a range of 2000km.

The range of the modified Dong Feng 21 missile is significant in that it covers the areas that are likely hot zones for future confrontations between U.S. and Chinese surface forces.

The size of the missile enables it to carry a warhead big enough to inflict significant damage on a large vessel, providing the Chinese the capability of destroying a U.S. supercarrier in one strike.

Because the missile employs a complex guidance system, low radar signature and a maneuverability that makes its flight path unpredictable, the odds that it can evade tracking systems to reach its target are increased. It is estimated that the missile can travel at mach 10 and reach its maximum range of 2000km in less than 12 minutes.

Supporting the missile is a network of satellites, radar and unmanned aerial vehicles that can locate U.S. ships and then guide the weapon, enabling it to hit moving targets.

While the ASBM has been a topic of discussion within national defense circles for quite some time, the fact that information is now coming from Chinese sources indicates that the weapon system is operational. The Chinese rarely mention weapons projects unless they are well beyond the test stages.

Along with the Chinese naval build-up, U.S. Navy officials appear to view the development of the anti-ship ballistic missile as a tangible threat.

After spending the last decade placing an emphasis on building a fleet that could operate in shallow waters near coastlines, the U.S. Navy seems to have quickly changed its strategy over the past several months to focus on improving the capabilities of its deep sea fleet and developing anti-ballistic defenses.

As analyst Raymond Pritchett notes in a post on the U.S. Naval Institute blog:

"The Navy's reaction is telling, because it essentially equals a radical change in direction based on information that has created a panic inside the bubble. For a major military service to panic due to a new weapon system, clearly a mission kill weapon system, either suggests the threat is legitimate or the leadership of the Navy is legitimately unqualified. There really aren't many gray spaces in evaluating the reaction by the Navy…the data tends to support the legitimacy of the threat."

In recent years, China has been expanding its navy to presumably better exert itself in disputed maritime regions. A recent show of strength in early March led to a confrontation with an unarmed U.S. ship in international waters.

Cruise missile capabilities are well-known, but can someone tell me how a (conventionally-armed) ballistic missile could possibly hit a rapidly moving aircraft carrier?

A fleet carrier can do what? 40 plus knots at flank speed?

But could a carrier group outrun or evade a missile traveling at ballistic speed?

Do not answer, please, if answer requires classified info. 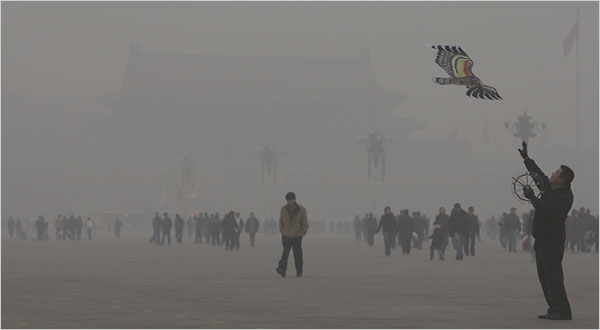 “Supporting the missile is a network of satellites, radar and unmanned aerial vehicles that can locate U.S. ships and then guide the weapon, enabling it to hit moving targets.”

ASBM are bad news for the US Navy. The loss of even one carrier would be devestating. This is something we need to deal with.

time for a missle defense shield, got to stop them red chinese. we gave tehm the money and technology to build this stuff, stupid us.

yes a carreir might make 50 mph, not sure if all teh support ships that sail with it can do that speed, and a carrier must have them support ships for defence. Our carriers are not well armored, they are soft targets, scarey stuff. a missle at mach 10, even lacking a war head is a big deal.

now if we had them airplane based laser guns, to kill missles in flight, we might have a good chance at defence.

maybe teh ship based missle defences can help agisnt this kind of attack.

I hate Gates. He thinks the Raptor is unnecessary too. If that program gets cut because of his inability to see beyond Iraq and Afghanistan I will be absolutely furious. I have already written my senator and informed him of this.

Okay, so, is this a ballistic missile or a cruise missile variant?

If this thing is nothing more than some sort of ballistic JDAM, I would think that once it reaches apogee, there is a limit to the radius of the kill zone it can be guided into.

Go back to DU troll.

Here is the answer. One downed carrier and one downed China.

This Chinese PR threat is nothing to worry about.

Not right now. But in 10-15-20 years...The US is going to be awash in red ink and entitlement programs from here on out and our military programs I feel will be curtailed.

China is floating in foreign currency and has lot's of money to spend on military R&D.

At Mach 10, there is no such thing as a small targeting adjustment.

When you can control flight and direction at 10,000 MPH, hitting a 5 acre target traveling at 60 MPH is child’s play.

The days of the carrier group are rapidly coming to an end. They were predicated on complete air superiority (needed to protect the ships). As new ways to make air superiority irrelevant are developed, the carrier group becomes more and more vulnerable, and eventually becomes as useless as a battleship - vulnerable to attack by everyone, slow, and actually a hindrance to battle.

At mach 10, a 60 MPH target is essentially standing still!