To: culpeper
The Obama administration is headed for failure on every front. The economic healing process is being interfered with by a government that doesn’t know what it’s doing. The country is bound to suffer grievously, and lose patience. We already catch a glimpse of the future from Alan Keyes, who recently said that the country was headed for “chaos, confusion and civil war.” According to Keyes, “Obama is a radical communist, and I think it is becoming clear. That is what I told people in Illinois and now everybody realizes it’s true. He is going to destroy this country, and we are either going to stop him or the United States of America is going to cease to exist.” The sentiments expressed by Mr. Keyes are those attending civil war. But matters have already taken a turn for the worse. There is a rumor in Washington that is making the rounds. It is alleged that the president has fended off dozens of law suits regarding his citizenship status, without producing a birth certificate to prove that he is a natural born citizen. In fact, Keyes will not acknowledge that Obama is actually the president. According to Keyes, “[Obama] has refused to provide proof that he is in fact a natural born citizen, and his Kenyan relations say he was born in Nairobi at a time when his mother was too young to transmit U.S. citizenship.” The lines are being drawn, and we are headed for national tragedy.

God's Judgment is about to come upon this once great nation. 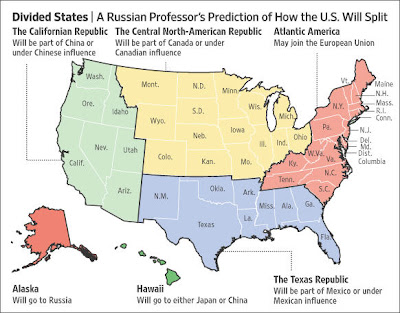 I believe the American Civil War II will begin in California. It explode from the bowels of drug gangs who will take control of major portions of the state. Some Californians will fight back, and the war will spread from there to the other states.

It'll explode from an intrusive, ever expanding, dictatorial government, that has pandered to, enabled and forced Americans to pay for their own demise, a government that clearly no longer represents the majority of Americans.

Ask yourself if the leadership and U.S. government of the 1950s would have tolerated what is occurring today in America.

NC, SC, and VA can’t go to the EU, they are already part of Mexico.

Russian professor is not so smart. 1) We don’t want New Mexico....2) Tennessee is not going to join with New York and Massachussetts.