"Fresh off of the 2008 Bilderberg Meeting, it looks as if New York Federal Reserve president Timothy Geithner is set to push a new agenda in the world of central banking that was likely decided upon at Bilderberg. Geithner yesterday, wrote an article in the Financial Times calling for a global regulatory banking framework. In addition, Geithner called for the Federal Reserve to have an instrumental role in this new framework. Geithner cites all of the problems that were actually created by the central bankers in the first place as the rationale for having greater centralized power. It is interesting Geithner decides to write this piece right after the Bilderberg Meeting where some of the most powerful figures in the world of central banking attended. Not only did Geithner attend, but the attendee list included Ben Bernanke the Federal Reserve Chairman, Henry Paulson the U.S. Treasury Secretary, Jean-Claude Trichet the president of the European Central Bank, Robert Zoellick the president of the World Bank and other high profile bankers. With the who’s who of central banking attending the Bilderberg Meeting, it is highly unlikely that what Geithner is proposing in his Financial Times article was not discussed at the Bilderberg Meeting. It is no secret that the true objective of the Bilderberg Meeting is to steer the world into accepting a global government. By establishing a new global regulatory banking framework, this will inch the planet ever closer to a one world currency operating in a cashless society where microchips are used to facilitate transactions. Make no mistake about it, this system will not be good, because it will be controlled by a bunch of criminal psychopaths like the one’s who attended the 2008 Bilderberg Meeting….

… What Geithner is proposing is entirely insane but this is the same tactic that the financial elites used to establish the Federal Reserve back in 1913. They created a crisis and said that the crisis happened because they didn’t have enough power to prevent it. The Panic of 1907 which was used to justify the passage of the Federal Reserve Act was actually caused by JP Morgan and assorted elite financial interests. They did this so they could use the crisis as an excuse to centralize their control and power over the banking system. Through the Federal Reserve, banks were finally consolidated under its umbrella through the Great Depression which was deliberately caused by the tight monetary policies implemented by the central bank. Throughout the 1920s money was made plentiful, but following the stock market crash of 1929, the Federal Reserve tightened the money supply which put hundreds of community banks out of business and allowed the central bankers to consolidate control over the nation’s banking system.

Geithner is using the excuse of the current financial crisis that was caused by the Federal Reserve and the world’s assorted central banks in order to again consolidate more power for the banking cartel. It is simply history repeating itself, only this time it is on a much larger scale….

… What Geithner doesn’t say in his article is that the current global financial crisis was caused by the Federal Reserve and the world’s various central banks. Alan Greenspan intentionally set interest rates at incredibly low levels after the 9/11 attacks. This encouraged lenders to lend out money using all sorts of creative financing packages. It also encouraged borrowers to borrow money from the lenders because of the cheaper money. These policies lead to the continued devaluation of the U.S. Dollar and the U.S. housing crisis which have been the main drivers behind most of the economic problems we are currently seeing.

Geithner wants us to believe that giving the Federal Reserve and the rest of this private banking system more power is what’s needed to resolve all of the economic problems that were caused by the central bankers themselves. How stupid does Geithner and the rest of the global elite think we are? We have a historical track record of central bankers creating economic problems and bringing in phony solutions to expand their control. We need decentralization and free markets to resolve the economic problems that have been created by these people, not more centralized power….

… the global elite are planning to push forward their cashless society grid agenda with the use of implantable microchips. The implantable microchips would be sold as a way for people to easily move through the militarized control grid that they’ve setup via the bogus terror war…. The central bankers would need a global regulatory framework for the banking system so they can move closer to a global currency operating in a cashless society.

This is some incredibly scary stuff. Of course there was not one word of the 2008 Bilderberg Meeting in any major U.S. media outlets. The corporate controlled media maintained a blackout on any coverage of this incredibly important yearly meeting of the global elite….”

Woo hoo, the buildacheeseburgers are back...

This is more fun if you imagine Moe the Bartender ranting this to Homer over a beer.

Alex Jones is not welcome here. Do not link to his sites.

Beware of the Stonecutters..

Not one word of the Flat Earth Society, either. Must be a conspiracy.

Where does the Stonecutters’ Guild fit into all this?

Check out this conspiracy letter from 1988 I was sent earlier today.

Trilateral commission, implants, new world order, the works.. lol... The more things change, the more they stay the same.. the conspiracy theories are always around, they just change the players... 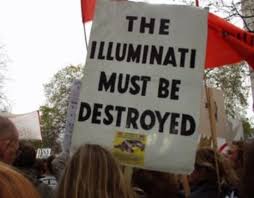 If they truly wanted to prevent another crisis, the only thing they need to strengthen are the teeth of the US justice system.

I’d make a counter demonstration sign that said “THE IGNORATI MUST BE DESTROYED!”..........

14 posted on 09/22/2008 8:21:38 AM PDT by mnehring (Maverick/Barracuda 2008)
[ Post Reply | Private Reply | To 13 | View Replies]
To: mnehrling
I believe that banking institutions are more dangerous
to our liberties than standing armies.
If the American people ever allow private banks to
control the issue of their currency, first by inflation,
then by deflation, the banks and corporations that will
grow up around [the banks] will deprive the people of
all property until their children wake-up homeless on
the continent their fathers conquered.
The issuing power should be taken from the banks and
restored to the people, to whom it properly belongs.

Thomas Jefferson, Letter to the Secretary of the
Treasury Albert Gallatin (1802)

“Alex Jones is not welcome here. Do not link to his sites.”

You know, this makes you part of the conspiracy.

Does anyone know the “Admin Moderator”? How is it that
“he or she” are up at all hours?

If you scramble the letters of “Admin Moderator” and add the mystical letters of Serigenti you get “Ratormodminad,” which we all know is the secret name of the Bildeburger Templar Masonic Roman Catholic Lions Club Axis.

Of course, we already know members of the “Admin Moderator” must kill a parent to be admitted into the ranks.

What ELSE do they do?

That’s fine, I didn’t know they were verboten. I just wanted to share the list of attendees because I’ve found it’s a good place for investment advice. After all, they are meeting to protect their money. How about this link:
http://www.prisonplanet.com/articles/june2008/060608_b_list.htm

If you look at the list, you’ll notice no Lehman Bros. But if you had noticed the Royal Bank of Scotland and invested in June, you’d be enjoying this right now:

Check out others on the list and you’ll know where to put your savings where it will be relatively safe.
http://ir.evercore.com/releases.cfm
http://en.wikipedia.org/wiki/Ripplewood_Holdings_LLC
etc, etc

Your humor is apreciated, at least by me. But don’t lose sight of these facts:
1) Regular meetings of the Bilderbergers do take place.
2) They are very secretive, with high security.
3) The press is overtly silent about this, despite the fact that Reuters is their official mouthpiece.
4) Consolidation of world power is their dominant theme, gleaned from scant documentary evidence.

Do I believe all the super-heated conspiracy hoopla? No.
Do they merit watching and analyzing? You bet your butt!