The US and Israel have condemned Iran after it test-fired a long range missile capable of reaching Israel.

Iran has tested the missile before, but the latest launch comes amid rising tensions with the US and Israel over the country's nuclear programme.

US Under-secretary of State William Burns said the test was "provocative".

He told a Congressional hearing: "We view force as an option that is on the table but a last resort.

"We do not believe we have exhausted all the diplomatic possibilities."

Mr Burns also told a Capitol Hill foreign affairs committee that UN sanctions on Iran were having the desired effect - by putting the brakes on its nuclear programme.

He said that although Tehran was trying to foster the perception its nuclear programme was advancing, "real progress has been more modest".

He said Iranian scientists had not yet perfected the technique of enriching uranium. Iran insists its nuclear programme is purely for civilian energy.

In the Israeli parliament, Housing Minister Ze'ev Boim said: "I suggest Israel will not talk, and Israel should prepare itself to do what is needed to do."

Two other types of missile with shorter ranges were also fired as part of the Great Prophet III war games being staged by Iran's military.

Brig Gen Hoseyn Salami, commander of Iran's Revolutionary Guards' air force, said: "Our missiles are ready for shooting at any place and any time, quickly and with accuracy.

"The enemy must not repeat its mistakes. The enemy targets are under surveillance."

Why is it ok for Israel, the US and the UK to have WMDs or nuclear weapons but not for any other country?

The tests are intended to deter any Israeli or US strike against Tehran's nuclear installations, says BBC diplomatic correspondent Jonathan Marcus.

Our correspondent - who is in Israel - says the country has a fully operational anti-ballistic missile system, which Israeli military experts believe can counter any Iranian threat.

But there is no room for complacency, he adds.

On Monday, an adviser to Iran's Supreme Leader said it would retaliate against any military attack by hitting the Israeli city of Tel Aviv.

Other commanders have threatened to close the Strait of Hormuz, through which a large part of the world's oil flows, and to target the US and its allies around the world if Iran comes under attack.

A White House spokesman condemned the Iranian test, as did both the American presidential candidates.

The French, German and Italian governments also expressed concern at the missile tests.

But Iranian President Mahmoud Ahmadinejad has insisted his country had no intention of attacking Israel.

Speaking on a visit to Malaysia on Tuesday, Mr Ahmadinejad said Iran did not fear an attack by the US or Israel over its nuclear activities, dismissing the possibility as a "joke".

Western leaders have been attempting to convince Tehran to stop enriching uranium, which it has continued despite the imposition of sanctions by the UN and the European Union.

Well Mike, that is largely because Israel, the US, and UK are not ruled by ultra religious lunatics bent on mass destruction and death. 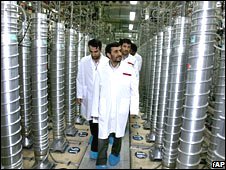 Nutjob: Oooo--look at all this uranium! We'll have a nuke on Tel Aviv in no time!

Dude in background: The press is behind us, Mr. President

Nutjob: Er...did I say 'nuke'? Uh...I meant nuclear--nuclear energy. We'll have a peaceful nuclear power plant up in no time!

Dude in background: Obama believes you, sir. Nice blue slippers, by the way.

Mike in London is a dumbass.

If I were an Iranian subject, I would be heading for the border, by any means.

The bloke is a bloody fool!

Why is it ok for Israel, the US and the UK to have WMDs or nuclear weapons but not for any other country? -- Mike, London, UK

The majority of people on BBC are anti-US idiots. Every chance they get they spit on us. If this is truly what the UK and europe have to offer screw them.Morons the lot of them.

14 posted on 07/09/2008 1:22:57 PM PDT by MARKUSPRIME
[ Post Reply | Private Reply | To 1 | View Replies]
To: Ernest_at_the_Beach
"The early morning launches at a remote desert site sent oil prices climbing."
Oh. But I thought the prime reason for the hike in a barrel of crude was directly related to current supply and demand. /sarc off.