Hillary Clinton has many admirable qualities, but candor and openness and transparency and a commitment to well-established fact have not been notable among them.

“Since her Arkansas years [I wrote], Hillary Rodham Clinton has always had a difficult relationship with the truth… [J]udged against the facts, she has often chosen to obfuscate, omit, and avoid. It is an understatement by now that she has been known to apprehend truths about herself and the events of her life that others do not exactly share. ”

“Almost always, something holds her back from telling the whole story, as if she doesn’t trust the reader, listener, friend, interviewer, constituent—or perhaps herself—to understand the true significance of events…”

On her book tour, she was asked on National Public Radio about the re-emergence of dormant Whitewater questions that week, when the so-called “missing billing records” had been found. Hillary stated with unequivocal certainty that she had consistently made public all the relevant documents related to Whitewater, including “every document we had,” to the editors of the New York Times before the newspaper’s original Whitewater story ran during Bill Clinton’s 1992 presidential campaign.

Even her closest aides ...could not imagine what possessed her to say such a thing. It was simply not true, as her lawyers and the editors of the Times (like CBS in the latest instance) recognized, leading to huge stories about her latest twisting of the facts.

“Hillary values context; she does see the big picture. Hers, in fact, is not the mind of a conventional politician,” I wrote in A Woman In Charge. “But when it comes to herself, she sees with something less than candor and lucidity. She sees, like so many others, what she wants to see.”

TOPICS: Crime/Corruption; Extended News; Government; Politics/Elections
KEYWORDS: 2008; anotherdemocrathero; bernstein; clinton; demlies; hillary; hillarylied; swiftboated Navigation: use the links below to view more comments.
first 1-20, 21-34 next last
Over 250 comments on this posted at the source. Red meat at the zoo.
1 posted on 03/26/2008 10:29:03 AM PDT by tlb
[ Post Reply | Private Reply | View Replies]
To: tlb

Hillary is what she is, a habitual liar.

I wonder how the rest of the world will look at this if Billary got elected? If she got in office, could you imagine how foolish this country will look?

I started reading some of them. Stupidity on display.

9 posted on 03/26/2008 10:40:18 AM PDT by Revolting cat! ("I am like...Dude......do you really....like want the Sex?")
[ Post Reply | Private Reply | To 1 | View Replies]
To: tlb; aculeus; dighton; Ezekiel
Hillary Clinton has many admirable qualities, but candor and openness and transparency and a commitment to well-established fact have not been notable among them.

"Other than that, Mrs. Lincoln, did you enjoy the play?"

Man, look at all those comments from the Clinton and Obama supporters going at each other like rabid wombats. The Disciples of the Obamessiah are throwing Hillary under the bus and calling her things as bad as anything I’ve ever seen here, and the Clintonians are going into their best “LEAVE BRITNEY ALONE!!!1!” crying jags, and accusing CNN and the mainstream media of being totally biased toward Obama. 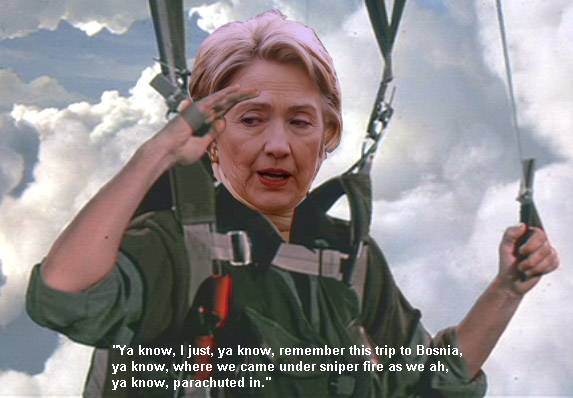 Thanks Carl, but the adults have known this for years.

“[Hillary Clinton] is being punished, not for one episode of ‘mis-speaking’ [about her Bosnian trip], but a whole record of dishonesty. In Bosnian terms it’s more disgraceful than many remember. In 1992 Bill Clinton ran against George Bush Snr promising to help the Bosnians survive genocide — then repeatedly went back on his word.... And I shall never forget meeting his Defense Secretary Les Aspin, who said he had wanted to land his plane under fire at Sarajevo airport to at least show some solidarity but was dissuaded by the White House. They told him it would distract from Hillary’s healthcare initiative. Now Bosnia has had its small, belated revenge on her” — columnist Christopher Hitchens, writing in Britain’s Daily Mirror.

14 posted on 03/26/2008 10:46:59 AM PDT by COUNTrecount
[ Post Reply | Private Reply | To 1 | View Replies]
To: tlb
Bernstein writes, “Almost always, something holds her back from telling the whole story, as if she doesn’t trust the reader, listener, friend, interviewer, constituent—or perhaps herself—to understand the true significance of events…”

Oh, so she's lying because she thinks we're dumb, and if she truly believed we were smarter she would tell the truth.

This story should not be used as another bludgeon over the Clintons’ head. Rather it should stimulate the msm to answer the obvious questionon why they were tacit co-conspirators when these blatant lies were spewed forth.

The Clinton’s were being the Clinton’s. A snake is a snake. The fourth estate exists beneath that level

I remember the day she gave her “question and answer” to the press in her pink suit. It was the day Nixon died. I am sure this had been planned, because not much came out of it, and everyone was talking about Nixon. I am sure they new his death had already occured and not reported to the press. Much of that whole press conference got swept under the rug. They even use dead people to hide their lies.

Got to be a leftist takes such twists of logic. No wonder they always think they’re smarter than us, they have to spend so much of their brain power to justity things. Hitler, why yes he was a marvalous fellow, had a real taste for art, was a natural born leader. Sure, he had a problem with murder and torture but other than that he was really quite a character.