Former radical activist Bernardine Dohrn and her companion William Ayers leave court in Chicago on Jan. 14, 1981. Dohrn received a $1,500 fine and three years probation for her role in the 'Days of Rage' disturbance in Chicago in 1969.

In 1995, State Senator Alice Palmer introduced her chosen successor, Barack Obama, to a few of the district’s influential liberals at the home of two well known figures on the local left: William Ayers and Bernardine Dohrn.

While Ayers and Dohrn may be thought of in Hyde Park as local activists, they’re better known nationally as two of the most notorious — and unrepentant — figures from the violent fringe of the 1960s anti-war movement.

Now, as Obama runs for president, what two guests recall as an unremarkable gathering on the road to a minor elected office stands as a symbol of how swiftly he has risen from a man in the Hyde Park left to one closing in fast on the Democratic nomination for president.

“I can remember being one of a small group of people who came to Bill Ayers’ house to learn that Alice Palmer was stepping down from the senate and running for Congress,” said Dr. Quentin Young, a prominent Chicago physician and advocate for single-payer health care, of the informal gathering at the home of Ayers and his wife, Dohrn. “[Palmer] identified [Obama] as her successor.”

Obama and Palmer “were both there,” he said.

Obama’s connections to Ayers and Dorhn have been noted in some fleeting news coverage in the past. But the visit by Obama to their home — part of a campaign courtship — reflects more extensive interaction than has been previously reported.

Neither Ayers nor the Obama campaign would describe the relationship between the two men...

Damn! You could take a picture of a radical liberal, and it would fit anywhere in a 50+ year time span.

“When I first met Barack Obama, he was giving a standard, innocuous little talk in the living room of those two legends-in-their-own-minds, Bill Ayers and Bernardine Dohrn,” Warren wrote on her blog in 2005. “They were launching him — introducing him to the Hyde Park community as the best thing since sliced bread.”

Ayers and Dohrn are rich kids who still believe in violent, leftist ideology. A good insight into Ayers and Dohrn is a quote by Dohrn describing the murder of Sharon Tate:

“Dig it. First they killed the pigs, then they ate dinner in the same room as them. Then they even shoved a fork into the victim’s stomach. Wild.” SDS activist Bernadine Dohrn praising the activities of the Charles Manson group.

Why would anyone be friends with a person who does not regret having planting bombs in order to kill innocents?

This story will not go away.

or am I just a member of the paranoid right? ;-)

BTW, a Nation of Islam member, Know4Life, put up the U-Tube video praising Obama on 2/15/08, but the interview is a year old.

If you click on Know4Life's homepage, you can find an interesting video of Farrakhan's Minister of Health, Dr. Alim Mohammed, on the biological causes of AIDS.

Guess who is responsible for AIDS? He's a real doctor, but obviously went nuts when he joined the Nation of Islam in 1968.

I know that no one needs to be reminded of Farrakhan's beliefs.

Nevertheless, here is a video on Farrakhan:

Wright has been a key supporter of Louis Farrakhan, and in December, honored the Nation of Islam leader for lifetime achievement, saying he “truly epitomize[s] greatness.”

To this day, Obama has not distanced himself from most of Rev. Wright’s comments. In a statement supposedly issued to address the matter, Obama ignored the point that his minister and friend had spoken adoringly of Farrakhan and that Wright’s church was behind the award to the Nation of Islam leader.

Instead, as outlined in a Jan. 17 Newsmax article, he disingenuously claimed he thought the magazine bestowed the award on Farrakhan for his efforts to rehabilitate ex-prisoners.

Williams Ayers gave $200 to the Obama campaign according to Lynn Sweet of the Chicago Sun-Times.

He’s 45 years old, so he was still in grade school.

Actually the fork in stomach and eating dinner with the corpses refers to the LaBianca murders that took place after the Tate murders. Leno LaBianca had the fork stuck in his stomach. Still, horrifying stuff to be exaulting.

Oh, I thought it was Sharon Tate.

Ayers went underground with several comrades after their co-conspirators' bomb accidentally exploded on March 6, 1970, destroying a Greenwich Village townhouse and killing three members of the Weather Underground (Ted Gold, Terry Robbins, and Diana Oughton, who was Ayers' girlfriend at the time). He and his colleagues invented identities and traveled continuously. They avoided the police and FBI, while bombing high-profile government buildings including; the United States Capitol, The Pentagon, and the Harry S Truman Building housing the State Department. Ayers and Bernardine Dohrn raised two children, Zayd and Malik, underground before turning themselves in in 1981, when most charges were dropped because of what Ayers described as "extreme governmental misconduct" during the long search for the fugitives.

“....Ward Churchill is under a sustained, orchestrated, and determined attack because of his political beliefs and statements and activities, and nothing more. No one doubts his productivity or his accomplishments. But the attack on Churchill is neither isolated nor innocent— the high school history teacher on the west side of Chicago gets the message, and so does the English literature teacher in Detroit and the math teacher in an Oakland middle school: be careful what you say; stay close to the official story; stick to the authorized text.

If someone of Ward Churchill’s stature and standing for so many years at the University of Colorado can suffer this kind of campaign, what chance do I have?

Every committee, every investigation, every report plays out under a shadow of the star chamber; everyone must choose who to be and how to act in response. For this reason I support Ward Churchill unequivocally, unapologetically, whole-heartedly. I urge my colleagues and my students and everyone who values education as a grand enterprise geared toward enlightenment and liberation to speak out forcefully and fearlessly now on behalf of the liberty of teaching and learning, on behalf of the right to think at all. The William Ayers Problem: William Ayers is an unrepentant terrorist, though he is normally described as a distinguished education professor. One does not necessarily rule out the other, but he himself acknowledges planting bombs in U.S. Federal buildings. There is now undeniable proof of a longstanding relationship between Barack Obama and William Ayers. We are not talking about two guys who just happened to bump into one another on the street. We are not talking about a secret admirer (Ayers) who quietly sent $200 to an aspiring politician.

No, we are talking about William Ayers hosting a fundraiser for Barack Obama and actively working with him to secure Barack's first electoral victory in Illinois. But wait, there is more. Barack and Ayers also served on the board of the Woods Fund. And they worked together to give money to some other folks, including a group with ties to the PLO.

What makes Ayers so toxic is his own written record equating U.S. Marines with terrorists. Look at the beating that John Kerry took for tossing his medals over the White House fence. Ayers did not toss medals, he threw bombs. Real ones. Bombs that exploded.

Do you think that Republicans will ignore Obama's ties to Ayers? The two were serving on the same board in 2002. We are talking less than six years ago and the record will come out showing some questionable grants by these two characters. William Ayers, in the age of terrorism, will be Barack Obama's Willie Horton.

You’re right. It was the Lo Bianca murders. But it shows what kind of people launched Obama’s career.

Time for Obama's chickens to come home to roost. Obama: Most Liberal Senator In 2007 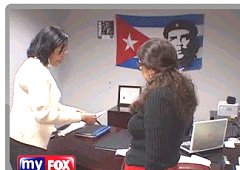 Darn, From the headline, I thought it was his trip to the Clinton White House.

Long active in CPUSA fronts in Chicago and was an attendee at the “10th National Committee” meeting of the CPUSA legal front, the National Committee to Abolish HUAC/House Internal Security Committee, March 22-24, 1969, which this writer attended and testified about (”Extent of Subversion in Campus Disorders”, Part 2, Sen. Internal Security Subcommittee, Aug. 15, 1969). Young also listed in “Fifteenth Report Un-American Activities in California, 1970”, by the Senate Fact-Finding Subcommittee on Un-American Activities, 1970 regular session of the California Legislature, Sacramento, Ca.m, p. 105

Also at this conference was Hillary’s law professor “Thomas I. Emerson”, Tommie the Commie, an id. CPUSA member,. p. 104

From Madmax, the news you won’t find in the mainstream media.

to be as bad as anything else that Saddam Obama has done.