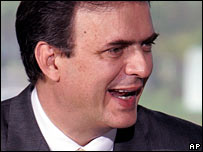 The bill has to be signed
into law by Mayor Ebrard

Mexico City lawmakers have approved a measure to allow terminally ill patients to refuse treatment. The local assembly voted unanimously in favour of the bill enabling patients living in the city to suspend treatment if it only prolongs life.

Family members of terminally ill people who are paralysed but can express themselves can also sign the order if two witnesses are present.

The bill still has to be signed into law by Mayor Marcelo Ebrard.

It could still be the subject of a legal challenge in this conservative Catholic country.

However, Hugo Valdemar, a spokesman for the Archdiocese of Mexico, told El Universal newspaper that the Catholic Church had no issues with the measure, which only applies to Mexico City.

But Mr Valdemar added that the Church was concerned that the bill could be a first step towards legalising euthanasia, which he said would be unacceptable.

It states that under no circumstances could drugs be supplied which could cause the death of a patient.

Patients wishing to forgo treatment would have to sign a release before a public notary indicating their desire to stop treatment.

Immediate family members would make the decision for minors and mentally impaired patients.

Health workers could declare themselves conscientious objectors and opt out of treating patients who decide not to lengthen their lives.

The bill also allows patients to specify if they want to donate organs.

The left-wing congress in Mexico City has recently passed a series of laws which are considered liberal in Latin America, such as legalising abortion in the first months of pregnancy and allowing gay marriages.

I view myself as deeply pro-life and this measure makes complete sense to me. Technology can delay natural death far beyond what is reasonable.

At some point the decision to allow death to happen (not to CAUSE death) is the right one.

I agree, this isn’t assisted suicide at all. I belive we can refuse treatment in this country as well.

This is fine just as long as it is understood that dialysis is trreatment, but food and water are simply sustenance.

the problem is when others step in on their behalf to refuse treatment. Terri Schiavo comes to mind

Terri wasn’t dying. That is a key distinction.

Not many years ago my mother refused cancer treatment after two visits for radiation therapy. She would not take chemo and chose to avoid delaying the inevitable. She had metastatic disease and died in about 4 months. She was 80 years and a devout Christian. Worst time of my life — God rest her soul.

Sounds right to me.

God bless you and your family. It is a painful thing to watch, I know. Your mother showed wonderful faith and you showed great courage in accepting her decisions.

10 posted on 12/06/2007 7:15:36 AM PST by trimom
[ Post Reply | Private Reply | To 8 | View Replies]
To: trimom
I view myself as deeply pro-life and this measure makes complete sense to me. Technology can delay natural death far beyond what is reasonable.

Turn that statement around and apply it to organ harvesting. Technology has caused the harvest of the most sought after organs from living people. Technology speeds the "natural death" for the so-called greater cause.

This is not about choice it is about adapting definitions BECAUSE of technology in my opinion. Anyone can take their own life but anybody cannot take another's organs without defining death so it is possible.

Organs are rarely harvested from patients with malignant and terminal disease. Usually, they are taken from accident victims, if I recall correctly.

I don’t perceive you as being argumentative at all. I think we are looking at different circumstances instead.

Your comments are well considered, either way.

I think you did the right thing. Once you’re past 75 years old and in rapidly failing health, who wants to end up prolonging the agony of a certain death, which just ends up being both a financial and emotional drain for everyone involved.

Exactly-—
the issue is we now have ways to keep people alive that we didn’t have 50 years ago....
tube feedings, dialysis, ventilators, IV fluids etc.

A miracle and blessing for some, but just prolonging death not life for others.

I did not make the decision. Mom made the decision against our wishes and I have to give her credit for no lack of courage.

15 posted on 12/06/2007 8:30:02 AM PST by Neoliberalnot
[ Post Reply | Private Reply | To 13 | View Replies]
To: yankeedame
I oppose abortion and euthanasia but see no problem with this measure as it's being reported here. My mother died of kidney disease and spent the last 2 years of her life on dialysis. She had treatment every other day and because her BP would often drop precipitously it would often take 8 or 9 hours to complete her treatment. She'd leave there feeling sick and tired and wouldn't feel better for 2 days...just in time to do it all over again.

I too have kidney disease and because I also have kidney cancer I've only got 1 kidney and I've already decided that I'll never submit to dialysis. I just refuse to spend my life tied to a machine. I hope that I'm years away from having to enforce that decision, but either way I don't want to be kept alive by any machine.

Why is 75 the magic number for you?

17 posted on 12/06/2007 12:23:20 PM PST by B4Ranch (( "Freedom is not free, but don't worry the U.S. Marine Corps will pay most of your share." ))
[ Post Reply | Private Reply | To 13 | View Replies]
To: trimom
Just to clarify what I was trying to say. A person choosing to not take action to save or extend their own life is absolutely a choice I believe we all have so long as it is the patient’s choice. As you stated, technology can keep people alive. It is because of technology that I turned your sentence around. When the patient’s choice is conveyed via any legal instrument (based on fashionable definitions) or an advocate it is the medical person that is taking that person’s life and further the medical person is not upholding their oath.

Technology and definitions are the issue. Organ’s are harvested everyday from many people who are not terminally ill and who have no malignancy. Organ harvesting is also technology based on a definition of death.

At least for the people reaching 75 now, going beyond this age is already extra time for the person. Don’t forget this generation was among those who smoked cigarettes heavily earlier in their lives, which makes them highly vulnerable to lung problems and heart disease. People for within the last 25-30 years—who smoke cigarettes a lot less—will likely live a lot longer if they exercise and eat a decently healthy diet.