The Manhattan district attorney’s office yesterday defended its decision to release an off-duty police officer who implicated himself in a fatal road-rage shooting — even though he fled the scene of the killing — saying that the officer’s claim of self-defense was enough to free him while a grand jury reviews potential charges.

The district attorney, Robert M. Morgenthau, was questioned about why the undercover police officer, Sean Sawyer, was not charged after he turned himself in on Monday, 19 hours after the shooting in Upper Manhattan.

“Where there is a claim of self-defense, as there is in this case, there is usually no immediate arrest,” Mr. Morgenthau said.

The shooting victim, Jayson Tirado, 25, was killed in a road-rage encounter early Sunday after a chase on First Avenue involving his purple Honda Civic and a yellow Nissan Xterra driven by Officer Sawyer, 34. When Mr. Tirado pulled in front of the Xterra and gestured as if he had a gun — though he was actually unarmed — shots were fired, according to one of Mr. Tirado’s two passengers.

Officer Sawyer turned himself in early Monday and was released by the authorities around 8:30 that night. His release angered Mr. Tirado’s friends and relatives.

“Why couldn’t he say, ‘Stop,’ and pull to the side like a normal policeman?” Mr. Tirado’s mother, Irene, 54, asked yesterday. She sat on a couch surrounded by photos of her son in the apartment they had shared at the Jacob Riis Houses in the East Village.

She said she understood that Officer Sawyer must have a “demanding and scary” job, but she questioned why he would fire a gun and then flee. 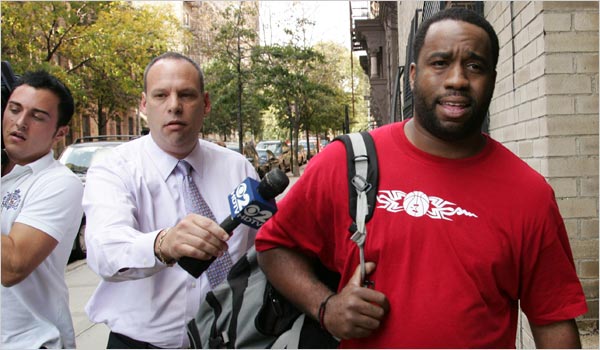 John Marshall Mantel for The New York Times
Police Officer Sean Sawyer, who surrendered on Monday after a shooting in East Harlem, leaving his apartment Tuesday on 102nd Street. 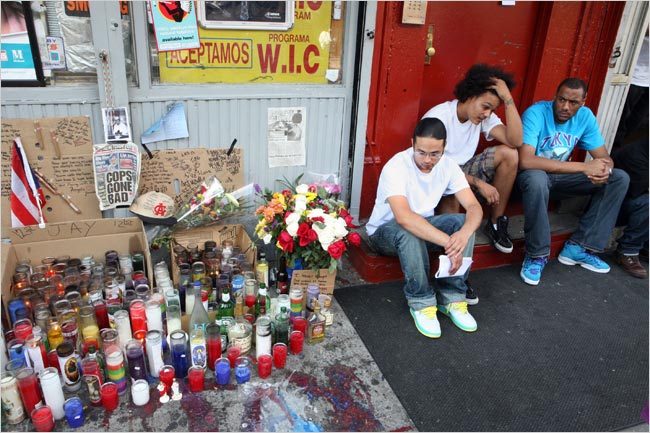 feeling safer all the time.

oh, yeah, what’s that saying about “when only cops have guns...” or whatever?

3 posted on 10/24/2007 7:00:28 PM PDT by the invisib1e hand (Keep The Heat On Hillary.)
[ Post Reply | Private Reply | To 2 | View Replies]
To: neverdem
saying that the officer’s claim of self-defense was enough to free him while a grand jury reviews potential charges

Sure, people get released all the time on their "claims." I'm sure this has never been tried before.

Pretty much everyone in jail "claims" they're innocent.

P.S. Of course, this is an article from the NY Slimes, so I’m simply commenting on what’s written here. I don’t expect the NYT has all of a sudden started printing balanced stories that reflect reality.

To: Travis McGee; Joe Brower; El Gato; Squantos; cyborg; Clemenza; Cacique; NYCVirago; The Mayor; ...
I thought only yahoos with concealed carry licenses did the "blood in the streets" scenario.

The drive by media didn't get the message from the DNC to lay off stories about guns. Aint you quaking in your boots about .50 caliber black powder muzzleloaders?

FReepmail me if you want on or off my New York ping list.

The DA, Robert M. Morgenthau, is a real heavyweight. I’d be inclined to trust his judgment on that alone.

Usually the question of granting bail is largely a matter of whether the person is likely to vanish if freed.

Morgenthau will not get an indictment. He’ll make sure of it; and then claim the decision was made by the grand jury. As I have said before, if a prosecutor wants an indictment, he’ll get it. If he doesn’t want one, he won’t get it.

Have you always been this naive?

Me too, maybe this guy and that other donut muncher from Oklahoma who tried to shoot a snake in a birdhouse but didn't take into account that his bullet would continue traveling downrange, and ended up in the head of a 5 year old kid, who died, can partner up. They sound like a match made in heaven.

Concealed-carry permit holder is at a stoplight with his family. Some whacked-out numbnuts in the car next to him pulls gun and starts screaming threats. Concealed-carry permit holder, being a responsible and decent citizen who knows it's his duty to protect his wife and kids, draws and shoots whacked-out-numbnuts (unfortunately he lived). Whacked out numbnuts turns out to be either and off-duty or plainclothes cop, I can't remember which. Good Citizen exonerated, not sure what happened to the cop. He probably went and got a job in another city so he can abuse and try to kill more people.

Retired J'town cop emptied his mag in 'self defense' on a CCW holder named Pickerell [?]. Anyways, cop and his wife claimed that he shot when pickerell drew down on him after a road rage incident. Funny thing is that the shots were all fairly close range going INTO the cab of a hummer, and the CCW holder never even got off a round.

Its fairly obvious that the leo had advanced on the hummer and let er rip, even all the 'eyewitness reports' of the first day said bullets bounced off buildings etc.

After that first day the only witness has been the wife. This pr!ck had diciplinary actions for abusive behavior and it was speculated that he was 'retired' for public safety.

Questioned and released...Pickerell was in a coma for a while and has since awakened and began learning to communicate, so time will tell if justice is ever served...