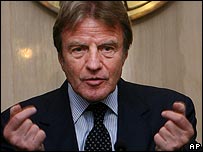 A warning by France's foreign minister that the world should prepare for war over Iran's nuclear programme has drawn a furious response in Iranian media. France was aping the US and its new president had "taken on American skin", the official Iranian news agency said.

On Sunday Foreign Minister Bernard Kouchner said: "We have to prepare for the worst, and the worst is war."

Iran's nuclear programme is to be debated in Vienna, Austria, at the UN nuclear watchdog's annual conference.

Iran denies it is trying to acquire nuclear weapons, and says it only wants nuclear power to generate electricity for civilian purposes.

But it has repeatedly rejected UN demands to give up the enrichment of uranium, which the US and other Western states fear is being diverted to a nuclear weapons project.

Mr Kouchner said negotiations with Iran should continue "right to the end", but that an Iranian nuclear weapon would pose "a real danger for the whole world".

He said a number of large French companies had been asked not to tender for business in Iran.

"The occupants of the Elysee (the French presidential palace) have become the executors of the will of the White House and have adopted a tone that is even harder, even more inflammatory and more illogical than that of Washington," it said.

The accepted wisdom in Iran is that the US is too wrapped up in Iraq and Afghanistan to launch another war in the region, says the BBC's Jon Leyne in the capital, Tehran.

Mr Kouchner was visiting Russia on Monday, where he was expected to push for tighter UN sanctions to try to force Iran to give up enrichment.

Russia has a UN Security Council veto over any new sanctions, and its support is seen as vital for any new approach.

But Mr Kouchner said even in the absence of UN action, the European Union should prepare its own sanctions against Iran.

Iran has warned that any new punishments could push it to stop co-operating with the UN nuclear watchdog, the International Atomic Energy Agency (IAEA). 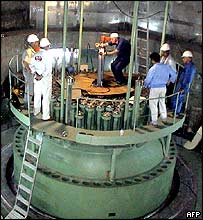 The IAEA's members meet this week in Austria, with Iran likely to top the agenda.

The director of the organisation, Mohamed ElBaradei, has been criticised in the West over a new deal with Iran to clear up questions about its past nuclear activities.

The US and its allies believe the deal just gives Iran more time, during which they fear it will advance its nuclear programme.

The BBC's diplomatic correspondent Jonathan Marcus says France has changed its approach to world affairs under its new President Nicolas Sarkozy, adopting a harder line on several issues, and seeking to improve relations with the US.

The United States has not ruled out a military attack against Iran to prevent it from acquiring a nuclear weapon.

However, a top general in Iran's elite Revolutionary Guards said any bombing raid on targets in Iran would provoke a tough response.

US positions in neighbouring Iraq and Afghanistan "are within our range", Gen Mohammad Hassan Koussechi told IRNA.

I am glad to see France’s new stand under Sarkozy. We are going to need every ally in the coming regional conflict.

Sounds almost like ElBaradei is afraid that Syria wont work twice as a place to hide the goods.

TIME FOR A SURPRISE PRE-EMPTIVE HIT!

Except we don’t need many boots on the ground in Iran. We have plenty of bombers and F-22s to do the brunt of the work.

Yeah, I know. I’ve been keepin up with the forums lately. Thanks for the link anyway though.

But, to be honest, I still cant decide with of the main players in the op I dispise most, france or the UN?

We need to do a lingo fix. Kind of like what the Eskimos have for ice, we need a mess of names for various and differentiated forms of enemy.

Or, maybe just enemy. All equal under the gun.

Iran is on the path to their own annihilation and they are too stupid to see it. C’est la vie, good riddence.

Leading up to the U.S. invasion of Iraq - France was feeding information to Saddam, blocking U.N. attempts at real sanctions and acting as their protector....

Now - the Islamonazis in Iran have the Democrat Congress, MoveOn.com, ANSWER, Code Pink, ALCU, etc, etc, etc.....all acting as their ally....
Perhaps that explains their cockiness....

I’m glad they are starting to act like our allies again.

I do wonder how this will affect their muslim population which is significant.

Let Sarkozy and the French take them out. It’s about time someone other than the USA grew some.

Yes great to see the french getting the back bone... But what about the Russians... Can we trust them? I say NOT! They have techs working with Iran right now... Watch the movie “the man who saw tomarrow” at the end it shows an attack from the gulf with russian and the man with the blue turban.. Attacking the usa... I dont trust Russia at all.. They are still our enemy..But Iran is the biggest threat right now..

Of course France is under a very different government now.