Some time ago, I made an effort to remove from this website all political statements made by me in the past. Many of these statements were incomplete statements, and many were dated. And a good many of the emails I received about these statements indicated that they were confusing to my newer Christian readers. I felt, when I removed the material, that I was doing what was best for my personal vocation --- which is, to write books for Jesus Christ.

My vocation at this time remains unchanged. I am committed to writing books for the Lord, and those books right now, are books about His life on Earth as God and Man. I hope my books will reach all Christians, regardless of denomination or background. This has become my life.

However, I have come to feel that my Christian conscience requires of me a particular political statement at this time.

Believing as I do that church and state should remain separate, I also believe that when one enters the voting booth, church and state become one for the voter. The voter must vote her conscience. He or she must vote for the party and candidate who best reflect all that the voter deeply believes. Conscience requires the Christian to vote as a Christian. Commitment to Christ is by its very nature absolute.

My commitment and my vote, therefore, must reflect my deepest Christian convictions; and for me these convictions are based on the teachings of Christ in the Four Gospels.

I am also keenly aware that we have only two parties in this country. Only two. This point can not be emphasized enough. We do not have a slate of parties, including one which is purely Christian. We have two parties, and our system has worked with two parties for generations. This is what we have.

Bearing all this in mind, I want to say quietly that as of this date, I am a Democrat, and that I support Hillary Clinton for President of the United States.

Though I deeply respect those who disagree with me, I believe, for a variety of reasons, that the Democratic Party best reflects the values I hold based on the Gospels. Those values are most intensely expressed for me in the Gospel of Matthew, but they are expressed in all the gospels. Those values involve feeding the hungry, giving drink to the thirsty, clothing the naked, visiting those in prison, and above all, loving one’s neighbors and loving one’s enemies. A great deal more could be said on this subject, but I feel that this is enough.

I want to add here that I am Pro-Life. I believe in the sanctity of the life of the unborn. Deeply respecting those who disagree with me, I feel that if we are to find a solution to the horror of abortion, it will be through the Democratic Party.

I have heard many anti-abortion statements made by people who are not Democrats, but many of these statements do not strike me as constructive or convincing. I feel we can stop the horror of abortion. But I do not feel it can be done by rolling back Roe vs. Wade, or packing the Supreme Court with judges committed to doing this. As a student of history, I do not think that Americans will give up the legal right to abortion. Should Roe vs Wade be rolled back, Americans will pass other laws to support abortion, or they will find ways to have abortions using new legal and medical terms.

And much as I am horrified by abortion, I am not sure -- as a student of history – that Americans should give up the right to abortion.

I am also not convinced that all of those advocating anti-abortion positions in the public sphere are necessarily practical or sincere. I have not heard convincing arguments put forth by anti-abortion politicians as to how Americans could be forced to give birth to children that Americans do not want to bear. And more to the point, I have not heard convincing arguments from these anti-abortion politicians as to how we can prevent the horror of abortion right now, given the social situations we have.

The solution to the horror of abortion can and must be found.

Do I myself have a solution to the abortion problem? The answer is no. What I have are hopes and dreams and prayers --- that better education will help men and women make responsible reproductive choices, and that abortion will become a morally abhorrent option from which informed Americans will turn away.

There is a great deal more to this question, as to how abortion became legal, as to why that happened, as to why there is so little talk of the men who father fetuses that are aborted, and as to the human rights of all individuals involved. I am not qualified as a student of history to fully discuss these issues in detail. I remain conscientiously curious and conscientiously concerned.

But I am called to vote in this, our democracy, and I am called, as an American and a Christian, to put thought and commitment into that vote.

Again, I believe the Democratic Party is the party that is most likely to help Americans make a transition away from the abortion crisis that we face today. Its values and its programs --- on a whole variety of issues --- most clearly reflect my values. Hillary Clinton is the candidate whom I most admire.

I have felt a certain pressure of late to express my feelings here; that pressure is mounting. That pressure has come from watching political debate on church and state in the media, from private emails from strangers and friends concerning these issues, and from conversations, often heated, with my fellow Christians and Americans.

My commitment to Christ compels me to respond to that pressure and to speak out on issues that I think are of crucial importance: whether or not we vote, and how we vote, and how our vote reflects our deepest moral concerns.

I repeat: I am a Christian; I am a Democrat. I support Hillary Clinton for President of the United States.

If I receive emails on this issue, I will do my best to answer them.

“Anne Rice has built her life around Vampires;”

Yes true; the vampire and Goth folks now have a clear choice in Hillary Clinton 2008.

As for her commitment to Christ - rather odd, I think.

You can be a Democrat and a Christian. You just have to decide which one you want to do well.

Well she must be a socialist, and if you are a socialist Hillary is definitely the best candidate. Makes sense.

But isn’t she a big Christian now? 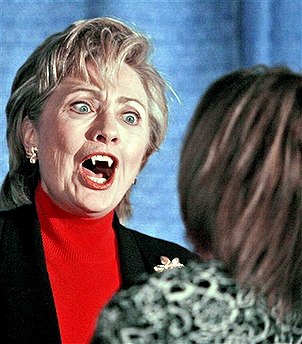 We can save a bunch of money now. No need for an election.

You’d think a writer could write.

The gospels ARE NOT OPEN TO INTERPRETATION...you either fit your life to match the values and truths of the Bible or you buy into the lie that Satan manages to so easily get many people into believing. I would never question a persons committment to Jesus Christ or their salvation, however, it bothers me that she goes on about the separation of church and state in one breath and then tries to defend her beliefs while supporting possibly one of the worst candidates to ever run for President.

This woman is demonstrably insance.

An Rice may be a Christian but she is also stupid,blind,deaf, and the most important, a Liberal, which, of course, means she is crazy. Moral of the story: even a crazy person can be saved.

MSM will declare that pix as a hate photo.

18 posted on 08/18/2007 12:54:05 PM PDT by Bringbackthedraft
[ Post Reply | Private Reply | To 10 | View Replies]
To: Renfield
Were Rice sincere in her odd not quite "pro-life" views, logically speaking, she would tend to support Rudi Giuliani, whose (public and lately) ideas on abortion she absolutely echoes.

OTOH, Hillary, whom Rice says she supports, is agressively pro-abortion.