In a startling departure from his previously stated position on civil unions, Mayor Giuliani came out to The New York Sun yesterday evening in opposition to the civil union law just passed by the New Hampshire state Senate.

" Mayor Giuliani believes marriage is between one man and one woman. Domestic partnerships are the appropriate way to ensure that people are treated fairly," the Giuliani campaign said in a written response to a question from the Sun. "In this specific case the law states same sex civil unions are the equivalent of marriage and recognizes same sex unions from outside states. This goes too far and Mayor Giuliani does not support it."

The Democratic governor of New Hampshire, John Lynch, has said publicly that he will sign the civil union law.

On a February 2004 edition of Fox News's "The O'Reilly Factor," Mr. Giuliani told Bill O'Reilly, when asked if he supported gay marriage, "I'm in favor of … civil unions."

He also said, "Marriage should be reserved for a man and a woman." Asked by Mr. O'Reilly in the interview how he would respond to gay Americans who said being denied access to the institution of marriage violated their rights, Mr. Giuliani said: "That's why you have civil partnerships. So now you have a civil partnership, domestic partnership, civil union, whatever you want to call it, and that takes care of the imbalance, the discrimination, which we shouldn't have." In 1998, as mayor of New York City, Mr. Giuliani signed into law a domestic partnership bill that a gay rights group, the Empire State Pride Agenda, hailed as setting "a new national benchmark for domestic partner recognition."

TOPICS: Front Page News; News/Current Events; Politics/Elections
KEYWORDS: elections; gayagenda; giuliani; giulianitruthfile; prolife; stoprudy2008; veronica Navigation: use the links below to view more comments.
first 1-20, 21-40, 41-60, 61-80 ... 441-453 next last
"Despite Mr. Giuliani's long history of supporting gay rights — or rather, because of it — yesterday's statement is likely to lead many to question whether the former mayor is concerned that his socially liberal record and positions aren't flying in the Republican primary. While he still holds a commanding lead in the national polls, he has taken a hit over the last month or so after reiterating his support for the public funding of abortion."
1 posted on 04/27/2007 3:10:52 AM PDT by Jim Robinson
[ Post Reply | Private Reply | View Replies]
To: Jim Robinson
What a whore.

No check that. At least with a whore you've got a pretty good idea of what you're going to get and how much it's going to cost you.

This guy isn't even honorable enough to be called that.

When are the waffle breakfast fundraisers going to start for Julie-Annie?

He’s no more a hypocrite than our own small-government, secure borders president. Take your pick.

Rudy’s numbers while he was mayor of New York, are arguably pretty good. But the man does not have the character, to be President of the United States. Even thought his character may be quite a bit higher than either one of the Clinton’s. Clearing a bar, set that incredibly low, is not a cause for celebration.

Sheesh. This guy in the White House disturbs me.

And the flip-flopping continues...

No way on earth I’d ever support a liberal, gun-grabbing, pro-abortion, queer-bot.

I just think more highly of the United States than to do that to my country.

I realize this is off-topic, but could you or someone compare Giuliani’s annual New York expenditure of $3 billion on a police force of 37,000 to a similarly large city of California or elsewhere? $81,000 per force employ seems a bit in excess.

IMO, taxpayers had a right to expect crime rates to decline in NYC with a force expense like that when taken into consideration national crime rates were declining.

I understand. But Bush certainly contributed to the breakdown of the conservative framework, which led to liberal politicians like Rudy succeeding under the Republican banner. The Republican “compass” is spinning madly, leaving open the field for populists like Rudy. If people are comfortable with a hypocrite like Bush, why bother scrutinizing anyone else with conflicting credentials.

Good point, however Conservatives cannot support and elect a Liberal to run as a Republican candidate and expect Conservatism to remain ideologically viable in the future, as the result would be a Republican Party no different from the Democrats at all.

He once stated that he supported and shared the same views as Clinton. As this campaign goes on the liberal DNA that he shares with Clinton is becoming more obvious with his comments and actions.

Howard Koeppel, one of the openly gay men Giuliani lived with during the
unraveling of his second marriage, said: “He [Giuliani] did tell us that if they
ever legalized gay marriages, we would be the first one he would do.”
SOURCE: New York Times, 8/04/01; Newsday (New York), 5/19/06” 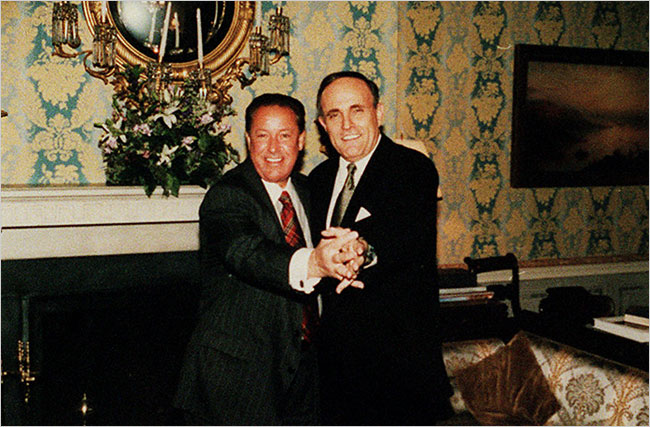 Giuliani at Gracie Mansion in 1997 with Howard Koeppel,one of the
openly gay couple Giuliani lived with, after ditching his wife and kids
to be with his mistress.

Fred Thompson says gay rights should be left up to the states. That's called a punt. :)

"Still, conservatives' concerns about Thompson persist: In the Senate during the 1990s, he served as a chief backer of campaign-finance legislation, which conservatives say diminishes their influence in politics. He also called last month for "a tolerant nation" on gay rights."

I am not attacking Fred Thompson BTW. I am pointing out that Rudy's positions on certain issues are not all that different, when you get to the nitty-gritty, than some of the other GOP candidates or possible candidates.

With every answer on every subject the 'tough as nails' Rooty can't make a decision now and stick to it.

Or better yet, he can drop out and stay in NYC or his Long Island mansion.

*sigh* How many times does this have to be explained... Thompson has NOT changed his mind on the idea of the need for campaign finance reform. What he has said is that the specific form of CFR known as McCain-Feingold isn't working and needs to be replaced.

That's a far, far cry from Guiliani's near-daily change of message depending on his audience and latest poll numbers.