GAZA CITY - Ali Abu Kamal's relatives say they are tired of lying about why the Palestinian opened fire on the observation deck of Empire State Building, killing a tourist and injuring six other people before committing suicide. Kamal's widow insisted after the shooting spree that the attack was not politically motivated. She said that her husband had become suicidal after losing $300,000 in a business venture.

But in a stunning admission, Kamal's 48-year-old daughter Linda told the Daily News that her dad wanted to punish the U.S. for supporting Israel - and revealed her mom's 1997 account was a cover story crafted by the Palestinian Authority.

"A Palestinian Authority official advised us to say the attack was not for political reasons because that would harm the peace agreement with Israel," she told The News on Friday. "We didn't know that he was martyred for patriotic motivations, so we repeated what we were told to do."

But three days after the shootings, Kamal's family got a copy of a letter that was found on his body, they said. The letter said he planned the violence as a political statement, his daughter said.

"When we wanted to clarify that to the media, nobody listened to us," she said. "His goal was patriotic. He wanted to take revenge from the Americans, the British, the French and the Israelis."

She said the family became certain that he carried out the attack for political reasons after reading his diary.

"He wrote that after he raised his children and made sure that his family was all right he decided to avenge in the highest building in America to make sure they get his message," said Linda, who works for the United Nations Relief and Works Agency for Palestine Refugees.

She said her mom burned the diary, fearing that it would cause the family trouble.

I hope you saw this.

Oh, my. So a documented case of Sudden Jihad Syndrome.

OUST ALL NON-CITIZEN ISLAMICISTS NOW AND STOP PROTECTING THEIR TERROR CULT, AS IF IT WAS A RELIGION!!!!!

Another sign that these people "are not all there," the Sears Tower (Towers?) in Chicago are the tallest buildings in the United States.

Islam is not a religion,
It is a ideology based on world domination masquerading as a religion.
No other religion requires total submission or death.
Islam does.!

ISLAM IS TERRORISM BY IT'S VERY NATURE

Shout it from the roof tops folks !!!

11 posted on 02/19/2007 8:07:05 AM PST by IncPen (When Al Gore Finished the Internet, he invented Global Warming)
[ Post Reply | Private Reply | To 10 | View Replies]
To: MotleyGirl70
"...the Palestinian opened fire on the observation deck of Empire State Building, killing a tourist and injuring six other people before committing suicide."

..."her mom burned the diary, fearing that it would cause the family trouble."

In 1997? this is just one more instance of The Clinton crime family covering up for their buddy Arafat. Talk about an inconvenient truth... 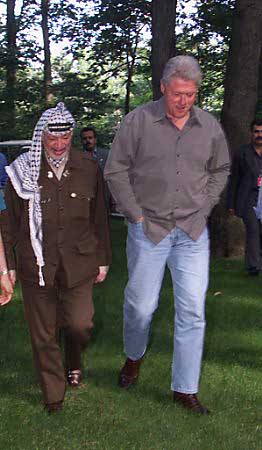 Here's CNN's original story on the matter. They should have known the "business imploded" line was a load of baloney. The article states he was asking some of the folks if they were from Egypt, trying to separate any Arabs from his rampage.

This incident happened while I was in Korea, I didn't remember ever hearing about it when I was over there.

I found this interesting:

But three days after the shootings, Kamal's family got a copy of a letter that was found on his body, they said. The letter said he planned the violence as a political statement, his daughter said.

And for whom does the doting daughter work?

said Linda, who works for the United Nations Relief and Works Agency for Palestine Refugees.

Our good friends at the United Nations!

This is what the New York Times had to say about this incident back in 1997:

The media DID report it as Sudden Jihad Syndrome back in 1997. Maybe the daughter didn't read that issue.

18 posted on 02/19/2007 8:52:56 AM PST by Jedi Master Pikachu ( What is your take on Acts 15:20 (abstaining from blood) about eating meat? Could you freepmail?)
[ Post Reply | Private Reply | To 15 | View Replies]
To: MotleyGirl70; faq
On a related thread it was pointed out that the NYT had published the letter found in the killer's pocket on February 27, 1997. Her claims of failing to get media attention are false (unless she means local media in Gaza and Palestine), since one of the biggest papers in the US published the letter in the town the incident happened in, on Page 1. The article below references the letter, and another article had the letter in full.


The gunman who opened fire on the observation deck of the Empire State Building on Sunday said in a letter found on his body that he planned his attack as revenge for the treatment of Palestinians by the United States, Israel and other countries.

"The Zionists are the paw that carried out their savage aggression," wrote Ali Abu Kamal, the 69-year-old English teacher from Gaza who shot seven people before killing himself Sunday afternoon. "My restless aspiration is to murder as many of them as possible, and I have decided to strike at their own den in New York, and at the very Empire State Building in particular."

Whoah! You beat me to it!

Perhaps she meant local media, as opposed to world media?

Gotta wonder why this is coming out now.