"I hate him for his cynicism, for his racism, his lies, for the massacre of the innocents that went on throughout his first term as president," she wrote.

While she was traveling to cover the Beslan school massacre in 2004, she was served a poisoned cup of tea. She fell very ill but survived. She was gunned down last month.

On Nov. 1, it was Litvinenko's turn to be poisoned. Protected by armed guards, he is fighting for his life in a London hospital. He may survive. Then again, he may not.

"I can tell you he's ill. He is quite seriously sick. There's no doubt that he's been poisoned by thallium, and it probably dates back to Nov. 1, when he first started to get ill," Clinical toxicologist John Henry said.

The poisoning is being investigated by Peter Clarke, head of Scotland Yard's anti-terrorist branch.

General Anatoly Trofimov: 'Prodi is our man there'

On April 3, 2006, a British Member of the European Parliament (MEP), Gerard Batten, cited allegations by Alexander Litvinenko that Romano Prodi, former President of the European Commission and currently Italy Prime Minister, had been the KGB's top man in Italy.

While planning his escape from Russia, Litvinenko sought the advice of his boss and long time trusted friend, General Anatoly Trofimov. Batten told the European Parliament that Trofimov advised Litvinenko not to go to Italy because it was a KGB stronghold.

"Don't go to Italy, there are many KGB agents among the politicians: Romano Prodi is our man there," General Trofimov told Mr Litvinenko. Trofimov was shot dead in Moscow in 2005.

According to the EU Reporter, on April 3, 2006, "another high-level source, a former KGB operative in London, has confirmed the story."

"This allegation against a former head of the European Commission is one of the utmost seriousness. It should be thoroughly investigated. The European Parliament should conduct its own investigation," Batten told the MEPs.

On April 26, 2006, Batten repeated his call for a parliamentary inquiry, revealing that: "Former, senior members of the KGB are willing to testify in such an investigation, under the right conditions."

"It is not acceptable that this situation is unresolved, given the importance of Russia's relations with the European Union."

Batten added that the KGB is not an organization one can resign from and pointed to the fact that, as Italy's Prime Minister, Mr. Prodi will have access to the Council of Europe classified information.

Litvinenko has alleged that Mr. Prodi assisted in the protection of KGB operatives known to be involved in the assassination attempt on Pope John Paul II in 1981.

In February 2006, Mr Litvinenko passed the information to Mario Scaramella. Scaramella is a consultant for the Guzzanti Commission which investigates Soviet infiltration during the Cold War.

The Commission has already alleged that Soviet and Bulgarian agents had collaborated to assassinate Pope John Paul II.

Mario Scaramella met Litvinenko in London the day he was poisoned to discuss new information about Anna Politkovskaya's murder.

Prodi was Italian Prime Minister from 1996 to 1998. In October 1996, British intelligence informed Rome about allegations that 261 Italians had been operating as spies for the Soviet Union for decades.

On Monday, Mr. Pollari, the head of the Italian military intelligence agency (SISMI), and the chiefs of the civilian secret service agencies were removed.

"After a few years these positions of delicate responsibility must find their natural rotation," Premier Romano Prodi said.

In 2005, La Repubblica alleged that Pollari had knowingly passed forged documents to the United States suggesting Saddam Hussein had been trying to buy 500 tons of uranium from Niger.

The documents became one on the main accusations used to build the case for the U.S.-led invasion of Iraq. 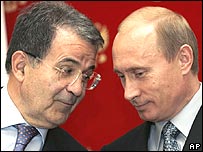 It wouldn't be a great surprise, considering the way he has behaved over the years. And for whatever reason--perhaps its revolutionary history--Italy has always had a large number of Communists.

Here are some interesting links about Prodi:

There is a report out tonight Alexander Litvinenko is on life support.

Bolsheviks. Europes political elites are overcrowding with Russio-Soviet cronies and lackeys. Pawns of Putin and Islam.
How I despise these weaklings...


Alexander Litvinenko was poisoned on the direct orders of the Kremlin because of his biting mockery of President Putin, according to a former Soviet spy now living in Britain. Oleg Gordievsky, the most senior KGB agent to defect to Britain, said that the attempt to kill Mr Litvinenko had been state-sponsored. It was carried out by a Russian friend and former colleague who had been recruited secretly in prison by the FSB, the successor to the KGB. The Italian who allegedly put poison in Mr Litvinenko’s sushi “had nothing to do with it”. “Of course it is state-sponsored. He was such an obvious enemy. Only the KGB is able to do this. The poison was very sophisticated. They have done this before — they poisoned Anna Politkovskaya (the campaigning journalist murdered on October 7) on a plane last year. Who else would know where she was sitting and could poison her food? Probably also it was the KGB that shot her.”
(snip)

And can we guess when this news might be on ANY American nightly news report!!!??? Oh, that's right, don't hold my breath!!!