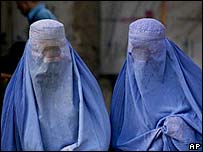 The proposed burqa ban comes ahead of Dutch elections

Dutch Muslims have criticised a government proposal to ban women from wearing the burqa or veils which cover the face in public places. Dutch Muslim groups say a ban would make the country's one million Muslims feel victimised and alienated.

The decision comes days ahead of elections which the ruling centre-right coalition is expected to win.

The proposed ban would apply to wearing the burqa in the street, and in trains, schools, buses and law courts in the Netherlands.

Other forms of face coverings, such as veils, and crash helmets with visors that obscure the face, would also be covered by a ban.

Immigration Minister Rita Verdonk, who is known for her tough policies, said it was important that all people in the Netherlands were able to see and identify each other clearly to promote integration and tolerance.

Last year a majority of MPs in the Dutch parliament said they were in favour of a ban.

An estimated 6% of 16 million people living in the Netherlands are Muslims.

But there are thought to be fewer than 100 women who choose to wear the burqa, a traditional Islamic form of dress.

The latest move came after an expert committee judged that it would not contravene Dutch law.

Ms Verdonk insisted the burqa was not an acceptable part of public life in the Netherlands.

"The Cabinet finds it undesirable that face-covering clothing - including the burqa - is worn in public places for reasons of public order, security and protection of citizens," she said.

The minister told the BBC that social interaction would be easier if faces were not covered.

"It is very important that we can see each other and can communicate with each other. Because we are so tolerant we want to respect each other."

Critics of the proposed ban say it would violate civil rights.

The main Muslim organisation in the Netherlands, CMO, said the plan was an "over-reaction to a very marginal problem", the Associated Press reported.

Naima Azough, an MP with the opposition Green party who is also Muslim, said the ban was not in keeping with the country's history of tolerance and said the Dutch government was playing on people's fears of Islamic extremism to win votes.

"The problem is only that you can't say that every person wearing a niqab or hijab or burqa - whatever you call it - is a radical," she said.

The Mayor of Amsterdam, Job Cohen, said he opposed the wearing of burqas in public and said women wearing one who failed to get a job should not expect welfare benefits.

"From the perspective of integration and communication, it is obviously very bad because you can't see each other so the fewer the better.

"But actually hardly anybody wears one... The fuss is much bigger than the number of people concerned," he said.

The issue of the type of clothing worn by Muslim women has become a hotly-debated subject in a range of European countries.

France has passed a law banning religious symbols, including Muslim headscarves, from schools.

Some German states ban teachers in public schools from wearing headscarves, but there is no blanket rule against burqas.

The issue of Muslim women's dress also surfaced in the UK, when former Foreign Secretary Jack Straw sparked controversy when he said he felt uncomfortable talking to someone whose face he could not see.

The Dutch relationship with its Muslim community has been under scrutiny since the murder of film-maker Theo van Gogh by Islamic extremists in November 2004.

Earlier this year Ms Verdonk clashed with a minority party in the governing coalition over her handling of the citizenship case of Somali-born Dutch MP Ayaan Hirsi Ali.

The MP scripted a controversial film about the treatment of women in Islamic society, directed by van Gogh before he was killed.

But she admitted lying on her 1992 application for Dutch citizenship, and Ms Verdonk initially called for the MP to be deported.

Wearing the burka is equivalent to full cover KKK sheets.

When Muslims begin allowing outward displays of Christianity in their countries, then maybe the Dutch will reconsider.

Isn't is funny how it only works one way?

don't the muzzies have a beef against every government because they feel they AREN'T being assimilated into the culture?? Here the Dutch WANT them to assimilate, yet the muzzies are crying foul...

"
An estimated 6% of 16 million people living in the Netherlands are Muslims.

But there are thought to be fewer than 100 women who choose to wear the burqa, a traditional Islamic form of dress."

Sure is! Some countries don't even allow Bibles.

In the direction European Mohammedans seem to be heading, they'll be lucky if they don't end up feeling dead.

Standby for the riots!

They can always go back to where they came from and wear anything they like.

Actually, if they go back where they came from, they can't wear anything other than a burqa, but that should suit them just fine..

Oh, and deport the whiners too. Problem solved.

Let the reconquest of Eurabia begin!

Thanks be to God: Father, Son, and Holy Spirit!

"Mardi Gras is one of the exceptions to the Louisiana law against wearing hoods and masks in public, the other two being Halloween and religious beliefs":

Sort of like treating the symptoms rather than the disease

But, it is a start. Hope they aren't to late.

They are a cult of ignorant throwback freaks, incapable of modern thought or behavior, and one could argue, with a genetic and religious propensity for savagery and violence, even against innocent men, women, children and animals. In essence, they are anti-life. Sorry for the harshness.

I have long used quick a mental trick to test the absurdity of a statement.

Where is Captain Obvious when you need him?

Still not so good at proofreading.