Democrats' 'New Direction for America' Is a Wrong Turn

The Democrats have many mantras and slogans: "grim milestone," "hopeless quagmire," "culture of corruption" and "Karl Rove's dingo ate my baby." But for a while they've had one big overall slogan, dripping with gusto: "Together, America Can Do Better."

Not will, or should, or must, but "can." It's like saying, "Together, Frenchmen can win a hot-dog speed eating contest." Doesn't mean it's going to happen, or that you'd want to watch. But it's typical of modern politics -- vague and patriotic, but not so patriotic it would unnerve a Dixie Chick. Together, America Should Be Greater! Together, America Might Go Further! Together, Democrats Can Win Elections! Providing the Republicans stay home.

This fine slogan was recently retired when the Dems needed something new to accompany their new vision for Western civilization. The winner was another phrase focus-tested into a thin smear of rhetorical mush: "A New Direction for America." Disaffected Republicans were heartened. You mean less spending, quicker confirmation of conservative judges, permanent tax cuts and increased military outlays? Well, no. Nancy Pelosi announced that should the Democrats retake the House, item No. 1 will be bold and sweeping: They will "give America a raise by increasing the minimum wage."

Apparently Pelosi believes that America makes the minimum wage. The population consists of industrial workers who get a dime each day for the number of fingers they haven't lost to the machinery, a few million skinny Bob Cratchits shivering in underheated counting houses, and six plutocrats whose tight control over Consolidated Spats, Amalgamated Whalebone and other nefarious trusts keeps everyone poor and shoeless.

The minimum wage was indeed a New Direction -- last century, anyway. But when the unofficial GOP slogan is "Fight and win the War on Terror by blowing up more bad guys real good," a call for a wage boost is like running against FDR with a pledge to reduce postal rates.

The Dems' manifesto goes on. My, it does go on.

"Lower Gas Prices and Achieve Energy Independence." By cutting the gas tax? More nukes? ANWR? Faster, pussycat! Drill! Drill! Right? Alas: They will "crack down on price gouging," presumably by hiring 100,000 people to roam the land looking at gas station signs and comparing notes. They will use federal funds to "develop American alternatives." Because there's a magic fuel just waiting to be invented, if only we spend enough money. Forget hydrogen cells; we're going to spend $230 billion on hydrogen stem cells. Everyone will be driving a Ford Embryo by 2016.

"Cut College Costs." Why? Because it's the job of the federal government to regulate the cost of a four-year degree in English lit, with a minor in textile history.

"Ensure Dignified Retirement." Again, sounds great. Mandatory fedoras for men; a 50 percent reduction in Viagra commercials. But no: The Democrats wish to "prevent the privatization of Social Security," because you cannot be trusted with your own money. It's an interesting definition of dignity: waiting by the mailbox for your government check.

"Require Fiscal Responsibility: Restore the budget discipline of the 1990s that helped eliminate deficits and spur record economic growth." Translation: taxes. Well, we've had 33 unbroken months of job gains. Tax revenues are up almost 13 percent over 2005, reflecting both the rosy-pink business climate and gains in personal income. As for the fat cats: Taxpayers making more than 200K used to pay only 40.5 percent of total income taxes -- the parasites! -- and now they pay 46.6 percent. When you let them make more money, they pay more taxes. Or you could take a "new direction" -- kill the goose, pull out the golden egg, and send it on a 40-city tour so everyone could see it and take pictures.

Anything on the war? No. The Dems slam President Bush for not adjusting Pell Grants for inflation, but the manifesto says nothing about Terror, the War On. We're supposed to intuit that they'd redeploy to Camp Murtha, from which we can strike Iraq with only a fortnight's delay. Let no one mistake their position: They have risen to the challenge of these perilous times, and come out against excess CEO compensation. No doubt this means they'll be hard on Iran.

Those mullahs are pulling down millions.

(James Lileks can be contacted at newhouse@lileks.com)

Not for commercial use.  For educational and discussion purposes only.

TOPICS: Political Humor/Cartoons
KEYWORDS: 2006; dnc; dncstrategy; lileks Navigation: use the links below to view more comments.
first 1-20, 21-24 next last
Or you could take a "new direction" -- kill the goose, pull out the golden egg, and send it on a 40-city tour so everyone could see it and take pictures.

Lileks Ping!
If you'd like to be added or removed, just drop me a line... 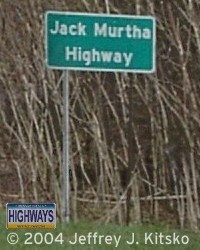 The road to NOWHERE!

Lileks is a national treasure.

But he forgot about how Karl Rove's weather machine destroyed New Orleans.

Alright, a nude erection for America.

Democraps are good at playing with words,creating little catch phrases,monikers,fancy titles etc.but they forget,words mean nothing without substance.Democraps have no substance!

Who could forget George McGovern's great slogan in '72 "Come Home America". I'm sure it could be dusted off in time for 2008.

I seem to remember a graphic people posted then, too. Funny stuff!

Democrats Announce their 'Contract with America'

Remembering how Newt Gingrich's 1994 "Contract with America" helped
Republicans end 40 years of Democrat domination in the House of
Representatives, leading Democrats have announced their own version. Called
"Six in '06," the Democrats' contract has six planks:

(1) A congressional pay increase, also known as the "William Jefferson plank." "Representative Jefferson was forced to take on a role of a corrupt politician in what he thought was an independent film, but turned out to be
an FBI sting operation," said House Minority Leader, Rep. Nancy Pelosi (D-Calif). "If members of congress were paid a decent salary, this type of tragedy could have been averted." (Senators and Representatives currently
receive salaries of $162,100 per year.)

(2) Nationalizing health care. "Our medical care is a mess," said Senator Hillary Clinton (D-N.Y). "America's health is too important to be left up to the medical profession. It's time for the government to take control to ensure a more rational and equitable distribution of benefits."

(4) Increasing taxes. "Republicans want voters to believe that lower taxes encourage investment and hard work," said Senator Minority Leader, Harry Reid (D-Nev.). "We say IRS audits and the threat of going to jail is all the encouragement required to make people work hard. Congress will do the investing once we restore the revenues given away by the Bush tax cuts."

(5) End the war on terror. "No matter how brave our soldiers are, no matter how valiant, no matter what their caring," said Sen. John Kerry (D-Mass). "Our soldiers cannot bring democracy to Iraq at the barrel of a gun. Some on the right use the fact that U.S. troops were able to defeat tyranny in World War II and bring democracy to Germany and Japan to try to support President Bush's ambitions for Iraq. But those were different times. We had a Democratic president, bipartisan support for the war effort, a cooperative media, and grateful foreign allies. Due to an unfortunate decision by too many voters in 2004, none of these key factors are present in the current crisis. Until that decision is reversed there is no hope. So, let's bring the troops home and end the bloodshed."

(6) "Wild card." "We really wanted to have six key issues-you know, six for 2006-but we couldn't agree on what the last item would be," said Howard Dean, Chairman of the Democratic National Committee. "Some wanted recognition of gay marriage, others suggested a law guaranteeing every woman's right to an abortion. So, we're keeping one slot open. Voters can fill-in the blank with whatever they want. On the other hand, there is this 'feces for fascists' idea coming out of Colorado that represents the kind of fresh
ideas our party needs. Eventually, maybe we'll get some focus groups together to figure out where our Party stands on some issue or other."

LOL-L! Laughing out loud at Lileks!

Actually, my real question could have been, "is that the long and the short of it?"

I'd love to be on a Lileks list! He's my favorite.