The Party Of Police Haters (Michelle Malkin On The We Stil Hate The Pigs, Man Party)
Worldnetdaily.com ^ | 04/05/06 | Michelle Malkin

There's only one thing more damning than the recent caterwauling of cop-bashing Rep. Cynthia McKinney and her race-mongering mob:

The stone-cold silence of Beltway Democrats.

While McKinney and her ilk sling wild charges of racism and conspiracy at the police, national Dems have yet to utter one clear word in defense of the men and women who protect their privileged backsides day in and day out in Washington.

But, hey, don't question their patriotism.

McKinney, who is black, is having the mother of all Beltway snit fits because, she claims, a white Capitol Hill police officer "inappropriately touched" her last week. After asking her several times to stop when she traipsed around a security checkpoint without proper identification, according to police accounts, the officer reportedly touched McKinney's arm or shoulder. In response, she struck the officer.

You know, Rep. McKinney, as a fellow "woman of color," I have been pulled aside by government security agents numerous times for secondary screening at airports over the last few years. I've had my bra straps snapped, my thighs pawed, and my torso wanded. I've had my cell phone tested for bomb residue, my laptop inspected, and my handbags manhandled.

McKinney is spitting venom about "double standards" of justice. But if I had done what McKinney did to the police officer just doing his job, I would be marking time in the slammer. Caught in an imperial act of lawlessness, McKinney is now conducting her own victim Olympics to deflect blame and responsibility:

Lawyer James W. Myart Jr. called McKinney "a victim of the excessive use of force by law enforcement officials because of how she looks and the color of her skin. Ms. McKinney is just a victim of being in Congress while black." Harry Belafonte and Danny Glover, admittedly ignorant of what McKinney did on Capitol Hill, were on hand to add their tribal "uh-huhs" and "amens" to the blanket condemnations of white police officers.

On Monday, an entire contingent of black leaders in Atlanta inveighed against law enforcement officers and lent McKinney their unconditional political support at a meeting of the Concerned Black Clergy of Metropolitan Atlanta in the Community Church of God. (Hello, church-and-state separatists?) "Racial profiling is a well-thought-out and planned attack on black political leaders," fumed state Rep. Roberta Abdul-Salaam. "It's going from the gold dome down to the White House. It's happening and it's wrong."

Another instigated the crowd: "We know what time it is, and that's why the most progressive of us are standing here. Because we know that if you can come and get Cynthia today, you'll come and get us tomorrow." Yet another McKinney supporter rattled his tinfoil and asserted: "I believe this incident with Cynthia McKinney is a setup ... I say the politicizing of this event was planned and staged! They decided to set this brave sister up!"

McKinney later appeared on CNN to insinuate that the entire Capitol Hill police department had "problems inside with the treatment of – or the respect for diversity – let me say." She adamantly refuses to apologize for her treatment of the officer she hit.

Two Capitol Hill cops died in the line of fire in 1998 defending politicians and government workers from an intruding gunman who waltzed passed a checkpoint in the same manner McKinney did. The Democrats' refusal to condemn the McKinney mob's smear campaign against the Capitol Hill police sinks to a new level of political cowardice. And stupidity. Republicans have already announced plans to introduce a bill defending the 1,700-member Capitol Hill police force – reinforcing the Donkey Party's haplessness on public safety and national security issues.

Contempt for law enforcement is a hallmark of the party of Ted Kennedy, Al Sharpton, Chuck Schumer, Jesse Jackson and the Clintons. New Yorkers won't forget the shameful attack on members of the Albany Police Department honor guard, who were cursed at and spat on by participants in the state Democratic Party convention in 2000. It's all of a piece. To quote a certain now-quiet Democrat senator from New York pandering to her black constituents:

"And you know what I am talkin' about."

TOPICS: Crime/Corruption; Culture/Society; Editorial; News/Current Events; Philosophy; Politics/Elections; US: District of Columbia; US: Georgia
KEYWORDS: antisecuritydemorats; cheeerstomichelle; cops; covictthefelon; cynthiamckinney; democrats; honorstouscp; jihadcindy1; mckinneytheracist; michellemalkin; racecard; thepigsman; worldnetdaily Navigation: use the links below to view more comments.
first 1-20, 21-24 next last
The Democrats are silent on Jihad Cindy #1's invocation of the Race Card TM defense against the Capitol Hill police. It shows they're not only unwilling to take on the race hustlers, they're still stuck in the 1960s when it was cool to hate the police. Its not too far-fetched to characterize them as the "We still hate the pigs, man" party. The haters of all that is good and true about America who have never grown up show as Michelle Malkin, would observe their true colors - "And you know what I am talkin' about." Yeah, right, they have.


(Denny Crane: "I Don't Want To Socialize With A Pinko Liberal Democrat Commie. Say What You Like About Republicans. We Stick To Our Convictions. Even When We Know We're Dead Wrong.")

The poor woman has such an inferiority complex. Amazing - well maybe not - she ever got elected;

2 posted on 04/05/2006 12:49:33 AM PDT by Bobibutu
[ Post Reply | Private Reply | To 1 | View Replies]
To: goldstategop
We should give the cops cattle prods to help make sure the Libidiots like McKinney are not able to maneuver around the metal detectors.

And if one does break loose then out comes the elephant gun with tranquilizer darts.

We should be so lucky. Remind me to buy stock in a company that manufactures strait jackets. If the Republicans had gonads, they'd call for HER censure.

Cool, I didn't know that donkeys could implode.

They should be calling for her expulsion...

Constitution for the United States of America

Each House may determine the Rules of its Proceedings, punish its Members for disorderly Behaviour, and, with the Concurrence of two thirds, expel a Member.

So far, Tom DeLay is the only one with the nards to do anything about it....

"After asking her several times to stop when she traipsed around a security checkpoint without proper identification,"

Using race victimization to cover stupidity and arrogance is pathetic.

Isn't McKinney a defender of a major cop killer?

Ummm, isn't there some rule about Michelle Malkin articles on FR ... pictures???

12 posted on 04/05/2006 3:09:37 AM PDT by MaDeuce (Do it to them, before they do it to you! (MaDuce = M2HB .50 BMG))
[ Post Reply | Private Reply | To 1 | View Replies]
To: Alia
Rep. Cynthia McKinney has been a vocal supporter of convicted cop-killer and liberal darling Mumia Abu-Jamal, the ex-Black Panther and lifelong Marxist, who repeatedly shot officer Daniel Faulkner as he lay on the ground in a Philadelphia parking garage. McKinney has questioned his conviction and publicly opposed his execution.

Mumia Abu Jamal is also a supporter of McKInney. On this website, he returns the favor by writing:

"And then there is Cynthia McKinney, the Georgia Democrat known for her outspokenness on issues of the day. McKinney, a young, brilliant, and Black House member, has been harshly criticized for daring to suggest (in a recent radio interview) that the Bush Administration knew about the 9/11 attacks beforehand, and that others in the administration are profitting from that event, and the resultant military mobilization abroad. Some Black columnists have attacked the outspoken representative for daring to speak her mind."

"Representative McKinney should be praised for speaking her mind. She should be lauded for asking important questions about American foreign and domestic policy."

14 posted on 04/05/2006 3:59:47 AM PDT by PGalt
[ Post Reply | Private Reply | To 1 | View Replies]
To: goldstategop
I never understood why the republicans can't or won't call the democraps on this...they use the Delay issue to paint the whole republican party...why won't someone in the party stand up and say:

You know painting the republican party as corrupt is like painting the whole democrap party as racist and against law enforcement...just look at Cynthia!!...When we have had a rouge member of congress the talking points go out that EVERY republican is like that and it's pounded in the media on all the shows!!!!!.
15 posted on 04/05/2006 4:23:27 AM PDT by conservativehusker (GO BIG RED!!!!)
[ Post Reply | Private Reply | To 1 | View Replies]
To: MaDuce
OK 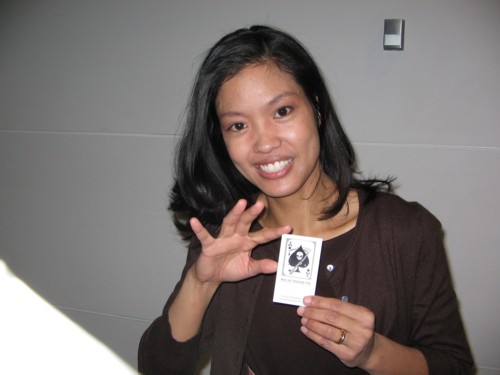 Seems the police should end the practice of allowing ANYONE to bypass security until McKinney apologizes and is dealt with. This would get elitist Dems to force her to respond. They would hate it if they had to act like all the rest of us in the "unwashed masses"!

I think I saw Miss McKinney with a "Stop Snitching" t-shirt on the other day...

The demorats will never denounce the nutjob, because they need the black vote in the fall

Watching Cynthia should lead to people understanding what a bunch of insane people the lilberals are. But I not that optimistic.