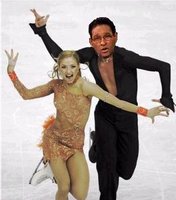 Is she wearing a hip slave collar?

1) In regards to your comments about the winter olympics, did you tell your writers not to use words like paucity, incredulous, or subjective anymore, cause man, we could see right through that.

2) When you heard the OJ verdict did you jump for joy and say “Yeah, baby!”, or just quietly do the fist pump?

3) How long did it take for you to get your brother the job?

4) Was Irv Cross your hero growing up?

5) Now that you're selling the cabin, how much are you asking?

6) Why do you always scribble on paper during your show? We know you’re just doodling.

7) How many times did you watch “The Great White Hope” this week?

8) Do you really need glasses?

"The story was also picked up at Free Republic, where one poster wrote, 'Remember what they did to Rush over the McNabb remark. I will contact HBO.'"

Do not know about the wife part (he does not seem the type to do that, but who knows?). But the man is so arrogant and condescending that he has to have relationship/work issues.

Methinks he would score highly on this test. :)

Seriously, I hope HBO fires the guy - he deserves it.

Or the Clinton cabinet.

Care to expand on that? Do you agree or have any evidence to support it? Know anything about the building of the "Alaska Highway"?

"In that era, many people in the military felt that the African American engineers, because of their race, could not be as skilled and industrious as Caucasians. At a time when segregation and Jim Crow laws were commonplace, using white and black troops on the same project was seen as experimental. Another military rule that was bent was the stipulation that African Americans were not to be sent to cold climates."

same asshole who never met a republican he liked, tried to outdo himself with his lips on the rear end of the big wigs in hopes of getting a shot at the anchor job and then we got stuck with evil vile katie couric;abandoned his wife, paid minimal child support and totally dissed his kids, a real winner and role model hopefully this chick will take him for everything soon

Yes, but Bryant also says that the winter Olympics are illegitimate because there were no original winter Olympics in Greece. Take that moron's "logic" back to the race issue, and tell me how many blacks were involved in the original Greek Olympics...
92 posted on 02/22/2006 8:24:36 PM PST by RavenATB (Patton was right...)
[ Post Reply | Private Reply | To 9 | View Replies]
To: dubyawhoiluv

Are you kidding me?

I guess we should mention this to all the black players in the NFL - especially the teams in Green Bay, Pittsburgh, NY/NJ, New England, etc.