Political strategist James Carville believes the Democratic Party "has a disease" that must be rectified – and soon – if the party has a chance of gaining back the White House or the Congress.

In an exclusive interview with NewsMax, Carville is touting his latest book, co-authored by CNN's Paul Begala, entitled "Take It Back: Our Party, Our Country, Our Future."

Both are savvy strategists who helped Bill Clinton win his come-from-behind victory that brought him from Little Rock to the White House in 1992. Later the pair were architects of Clinton's successful 1996 re-election.

Today, they have changed roles from insider Beltway operatives to pundits who are warning that their party – today out of power in every branch of the federal government - needs emergency resuscitation. Surprisingly, both authors argue that the party needs to change its dogmatic thinking on abortion rights, gun control and environmental concerns.

"We think the problem with the party is anatomical," a direct result of outdated beliefs, such as that supporting health care for everyone must also mean support for late-term abortions, Carville tells NewsMax.

With plenty of his famous Cajun spirit still directing barbs at Republicans and President Bush, Carville's book is notable in that it is not simply a polemic against the Republican Party, but one that doesn't hold back on fellow Democrats whom he and co-author Begala have severely criticized for failing to learn lessons from past elections.

Carville and Begala's "Take It Back" is fast becoming required reading for Democrats. Interestingly, it's developed Beltway "buzz" among Republicans who see it as a must read for understanding how Hillary Clinton may position herself in the 2008 race.

With Hillary already the presumptive Democratic nominee for 2008, Carville makes clear he is ready to join her 2008 crusade.

Last week Carville told radioman Don Imus, "I'll do anything in the world for Mrs. Clinton." As for her presidential ambitions, he playfully said, "I'm sure she'll tell us what her intentions are sometime."

There is little doubt that Carville's "Take It Back" could be the Democrats' - and Hillary's - playbook for the next two years.

Without naming names, Carville said there's too much dead wood in his party.

"There's a significant part of the Democratic Party that doesn't want to reform anything. We call them the 'Remainderists.' Okay?

"Remainderists are people who say that if you hate them [the GOP] enough then we're what remains and then people will vote for us and then we can have our people at the Capital Grill (a popular power restaurant a few blocks from the Capitol Building). And then we can get more golf trips and bigger steaks."

That's got to change, Carville says.

And it'll happen with a new cadre of "challenging candidates" willing to reform Washington down to its core, Carville argues.

"That what I'm waiting for" - to give the old lions in Congress some competition on ideas.

"The problem is not that the Democrats don't have any ideas," Carville candidly admits. "They got too many ideas."

For example, if "you ask any Democratic think tank or Democratic politician what you think you ought to do about [fixing things], they've got eight ideas!"

In fact, he says, the "central Democratic problem is that we lack a narrative."

"You hear a Democratic speech and you hear that 'I stand for a woman's right to choose, a person's right to health care, a nationalist foreign policy, a cleaner environment,'" Carville says.

Such lists just "produces a litany" of ideas that "sounds like something we're for. But it doesn't mean anything."

Carville reiterates his thesis: "The damn problem is that they have far too many things spread all over the map."

To help bring focus, Carville thinks he's hit on a GOP-inspired theme that will work to unite his faltering party - one that needs "to start with a real hard-core return to reform."

‘Wrap Ourselves in the Flag'

"We actually believe, and we have a chapter in [the book] on it, that the Democrats should embrace what we call 'Progressive Patriotism.' We should wrap ourselves in the flag just like Republicans have done so successfully post-9/11 and even back to 1994 when House Republicans developed their "Contract with America."

Carville says Democrats – such as Kerry did in 2004 - don't seem to understand that just because they've got a large supermarket with all these nifty products "that ain't a gourmet café."

Still missing is that "narrative" he thinks the GOP has artfully mastered.

"See, Bush says, 'I was a shiftless drunk, I was transformed by the power of Jesus Christ, I was further transformed by 9/11 and I will protect you from the terrorists in Tehran and the homos in Hollywood.' And he sticks with it!"

Carville and Begala argue that moving "somewhere on the ideological scale" is not the key to changing the Democrats from a losing party to a winning party.

"Progressive Patriotism" is the operating philosophy since "everything fits under this rubric." For example, the wealthy can give up their tax cuts, because we're all in this together. Or so Carville thinks.

That's what we need; we're all in this together.

Of course Congress is going to have to reform itself, he says. Of course we're going to wean ourselves from the special interest groups.

Of course we're going have to change things. We can't ask everybody in America to be part of patriotism and have our leaders not be part of it too.

Carville's ideas on restoring his party to power come from GOP successes.

He credits Newt Gingrich's takeover of Congress in 1994 and the "Contract With America" with offering a similar approach.

"I admired that. And I've talked to Gingrich at length about this," he says of Gingrich's strategy. He notes that the House Republicans failed to seize the momentum of their success.

Carville's thinking flies in the face of "the cocktail party circuit" and the cable TV crowd who say Democrats stand for nothing.

"We say no, they stand for too much and that it doesn't fit into America," he says.

"My intention at the bottom of the stairs was fine but once I saw the fun and games that were going on I jumped in."

The same thing happens to people coming to the Congress, Carville says. "I do think that to a large extent we put good people in a bad system and we make them not as good people as when they started.

"There was actually a good Eddie Murphy movie about a scammer who comes to Washington. There was a lot more truth in that movie than most people realize," Carville notes. "There are good people in the lobbying community and in Congress. But you know what?" he says ruefully: "Good people do bad things."

People like Jack Abramoff, the disgraced former Republican lobbyist who allegedly has implicated up to 80 members and congressional staff and executive branch senior aides with possible wrongdoing.

Carville acknowledges that some Democrats will be tainted by the ongoing scandal - one that's "gonna get a whole lot worse."

Still, the Abramoff scandal may get lost on the public, who won't see the distinction that mostly it's Republicans caught in wrongdoing, Carville argues.

And that's one of the key problems for his party - to get its voice heard as though from a narrative story instead of just a bunch of worn-out litanies.

"Nobody has been able to communicate through a litany, only through a narrative. But we're a party of litanies," he says.

"Everything should be on the table of reforms," he says. "We have to change how we drive, how we are consuming energy, deal with deficits and exploding health care costs. And the first people we've got to deal with are the people in Congress because they have to set the example.

On other matters, including getting misty-eyed when mentioning his wife, GOP strategist Mary Matalin, Carville said:

TOPICS: Constitution/Conservatism; Extended News; Government; News/Current Events; Politics/Elections
KEYWORDS: begala; bookreview; carville; chairmandean; democrats; dnc; dncstrategy; jamescarville; paulrodriguez; sickdems; takeitback Navigation: use the links below to view more comments.
first 1-20, 21-40, 41-60, 61-80 ... 141-142 next last
Political strategist James Carville believes the Democratic Party "has a disease" that must be rectified – and soon – if the party has a chance of gaining back the White House or the Congress.

Or they could just go ahead and become extinct.

Democrats have a disease alright. It's called Hate America. And apologize to every enemy we've ever had.

Liberalism is the disease, Carvile.

Easily enough said, but Dems. are too addicted to liberal special interest money. No one else will pay Dems. for expensive election campaigns - savvy businessmen don't support losers for long.

And lo, they went about their lives in impotent fury, because they were without power to alter their dismal futures or embitter anyone else's.
There's their narrative.
7 posted on 01/16/2006 4:37:59 PM PST by Darksheare (Tagline subverted for nefarious plans of nefariousness.)
[ Post Reply | Private Reply | To 1 | View Replies]
To: wagglebee

11 posted on 01/16/2006 4:39:14 PM PST by PatriotGirl827 (There are no short cuts to any place worth going.)
[ Post Reply | Private Reply | To 1 | View Replies]
To: wagglebee
"See, Bush says, 'I was a shiftless drunk, I was transformed by the power of Jesus Christ, I was further transformed by 9/11 and I will protect you from the terrorists in Tehran and the homos in Hollywood.' And he sticks with it!"

No matter how much frosting they put on top,their cake is still made of s##t.
They have a malevolence inside that will always slip out.

"Democrats have a disease alright."

It's called Treason. It is cured with long prison sentences, a bullet, or a hangman's noose.

13 posted on 01/16/2006 4:39:43 PM PST by DarthVader (The DemoRats are Deeply Saddened!)
[ Post Reply | Private Reply | To 2 | View Replies]
To: wagglebee
"Bush says, 'I was a shiftless drunk, I was transformed by the power of Jesus Christ, I was further transformed by 9/11 and I will protect you from the terrorists in Tehran and the homos in Hollywood.' And he sticks with it!"

The disease is Irrelevance, and Carville is Typhoid Mary.

Performanced based income is not part of the agenda. 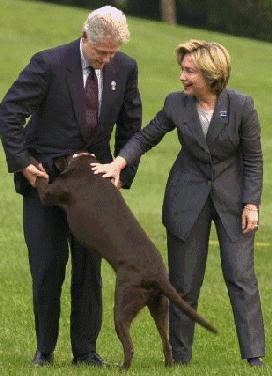 Wrong again, James - the problem isn't whether the Demagogues have so many or so few ideas, it's that they have so many BAD ideas. All they can try for is to re-warm socialism while whining and bleating that they are being misunderstood. The reason nearly every national 'Rat candidate from Dukakis to the present has fled frantically (and dishonestly) from the "liberal" label is that (1) the Demagogues represent a leveling, egalitarian, interventionist radicalism which will not "sell" to the American majority; (2) a solid majority of the country consistently rejects their socialist ideas, and the 'Rats can only succeed when they are able (with plenty of MSM collaboration) to present false fronts to the public.
19 posted on 01/16/2006 4:43:41 PM PST by Enchante (Democrats: "We are ALL broken and worn out, our party & ideas, what else is new?")
[ Post Reply | Private Reply | To 1 | View Replies]
To: wagglebee
Yeah, their disease is actually a psychosis. They're right; everybody else is wrong. They're going to take control and force themselves down our throats.

If anything, the real value of this is it probably does reveal what Hitlery's strategy will be for 2008.