What happened to the internal Iraqi government documents that top U.S. weapons inspector David Kay said had convinced him that Saddam Hussein had weapons of mass destruction?

In January 2004, Kay told Congress that the U.S. was "almost all wrong" in believing that Saddam had WMDs.

But six months earlier in July 2003, Kay said he was sure Iraq had the banned weapons - based on millions of pages of internal government documents recovered from Saddam's regime.

"I've already seen enough to convince me," Kay told then-NBC anchorman Tom Brokaw. "You cannot believe how many cases we have of documents and equipment that are stored in private residences," he added.

Brokaw sounded convinced as well, telling his audience: "For David Kay, this is a motherlode, an estimated seven and a half miles of documents, many of them collected by US military from official buildings, but many others handed over by Iraqi civilians."

Kay explained: "We're finding progress reports. They also got financial rewards from Saddam Hussein by breakthroughs, indicating breakthroughs. They actually took - went to Saddam and said 'We have made this progress.' There are records, there are audiotapes of those interviews which give us that."

More than two years later, the documents that convinced Mr. Kay that Saddam had weapons of mass destruction remain a closely guarded secret, with a team of 200 Pentagon analysts reportedly still sifting through their contents.

But thanks to the Weekly Standard's Stephen Hayes, we know a little bit about what persuaded Kay that Saddam's banned weapons were a slam dunk.

As Hayes reported two weeks ago, some of the titles on the Iraqi documents were quite explicit:

• Cleaning chemical suits and how to hide chemicals

• Denial and Deception of WMD and Killing of POWs

• Ricin research and improvement • Memo from the [Iraqi Intelligence Service] to Hide Information from a U.N. Inspection team (1997)

Of course, the Iraqi documents never led Kay's search team to the actual banned weapons themselves.

But the fact that the documents exist means that only two explanations are possible.

1] Saddam Hussein was able to spirit his WMD stockpiles out of Iraq in the nearly year-long run-up to the war. Or . . .

2] Saddam had his government forge, literally, millions of pages of documents falsely indicating that he not only had WMDs, but had made extensive plans to hide them.

Only one of the above options makes any sense at all.

In the meantime, the Bush administration needs to stop the Pentagon's dithering and order the immediate release of the evidence described by Kay - including the "audiotapes" and "equipment" he mentioned to Brokaw.

Not only are there tons of documents our government wont declassify, but thousands of crates of official Saddam regime documents sitting in a warehouse in Kuwait (i've read thats the location) that are 'waiting' to be translated.

To top it off, we already have conclusive evidence of missiles, rockets, artillery shells, etc in classified satellite photos going into Syria during the begining of the invasion... going to the bakarra valley.

Why are they not relased? ... I wish i knew. Maybe a convenient release sometime in mid 2006? Hmm... I'm not much for conspiracies but it sounds like it would be a perfect time.

They buried the documents with petah jennings. The old lefty took one for the team {he figured, what the heck, I'm going anyway, maybe I can get 36 virgins}.

I hope the strategy is to release this information in 2006, after the Democrats have hung themselves nice and proper.

The other interesting statement from Kay (not reported by MSM, of course) can be found in his Senate testimony.

Kay supports the removal of Saddam in his testimony.

"Why are they not relased? ... I wish i knew. Maybe a convenient release sometime in mid 2006? Hmm... I'm not much for conspiracies but it sounds like it would be a perfect time."

Somehow, Lefties inside the gov't are short circuiting this huge, multifacted story.

THE HAGUE (Reuters) - A Dutch businessman sold chemicals to Iraq knowing Saddam Hussein would use them to carry out poison gas attacks that killed thousands of people, prosecutors told the start of his trial on Monday.

Frans van Anraat, 63, is charged with complicity in war crimes and genocide for supplying agents for poison gas used by Iraq in the 1980-1988 war with Iran and against its own Kurdish population, including a 1988 attack on the town of Halabja.

"He is being accused of delivering raw materials necessary to build Saddam Hussein's chemical weapons. The use of those weapons by the regime in Baghdad led to death of thousands in Iraq and Iran," Prosecutor Fred Teeven told the court.

"He is complicit in serious international crimes." 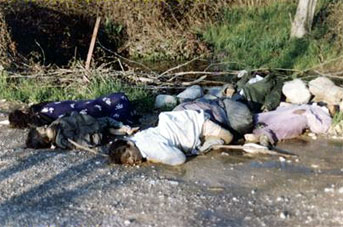 The court, packed with relatives of Halabja victims and members of Kurdish organisations, overruled arguments by defence lawyers that the case was inadmissible as Saddam himself was on trial for war crimes in Baghdad. Saddam has denied all charges in his trial, which began in October.

Asked by the presiding judge whether he wanted to comment, Van Anraat said: "I am leaving everything to my lawyer."

A small group outside the Hague court displayed photographs of Kurdish victims of chemical weapons and held a red banner reading "Genocide Never Again". The Halabja attack on March 16, 1988, killed an estimated 5,000 people.

"I hope he gets a life sentence," said Amir Gadir of Victims of Genocide Against Kurds in Halabja.

Van Anraat said he did not know Iraq intended to use the raw materials he provided for chemical weapons, according to a statement he gave in December that was read out in court.

His lawyers said there was no convincing evidence linking material Van Anraat supplied to chemical weapons used by Iraq.

"The prosecution will have to prove the raw materials were used in weapons and that these weapons were used in the village to come to a conviction," lawyer Jan Peter van Schaik said.

The first Dutchman to be tried on genocide-related charges, Van Anraat faces up to life in prison if convicted. The trial is expected to last about three weeks. A verdict is due on December 23.

Iranian and Iraqi victims of chemical attacks plan to seek up to 10,000 euros (6,800 pounds) compensation each from the accused.

"Ten of my relatives died. My parents, sisters and brothers were wounded," said Danya Mohammad, 28, one of 16 Halabja victims who have launched a separate suit against Van Anraat.

Prosecutors accuse the Dutchman of shipping chemicals from the United States to Belgium, and from there to Iraq via Jordan.

A past criminal investigation by U.S. customs authorities based in Baltimore found Van Anraat had been involved in four shipments to Iraq of thiodiglycol, an industrial chemical which can be used to make mustard gas. It also has civilian uses.

Van Anraat was first detained in Milan in 1989 following a U.S. request but was released after two months. He then fled to Iraq, where it is thought he stayed until the 2003 U.S.-led invasion, when he returned to the Netherlands through Syria.

He was arrested by Dutch officials last December as he was preparing to leave the country.

"The images of the gas attack on the Kurdish city Halabja were a shock. But I did not give the order to do that," Van Anraat said in a 2003 interview with Dutch magazine Nieuwe Revu. "How many products such as bullets do we make in the Netherlands?"

The United States said Iraq's suspected weapons of mass destruction were one of its main reasons for going to war in 2003, but significant stockpiles of chemical and biological arms have not been found.