U R not Prince. U should capitalize, and use punctuation 2. Otherwise U sound like a idiot. 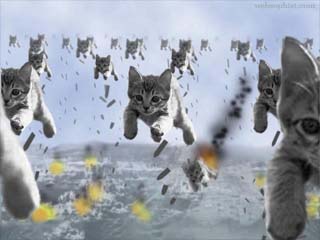 I think I can confirm this is a new found transcript of the Viking Kitty (Spittin' Kittens Squadron) bomb run.
In this new video, you can hear VK Red and Blue leaders discuss trolls running scared.

Pilot: "Large group of individuals on the road, do you want me to take those out?"

Command: "Take them out."

VK Blue Leader: "Viking Kitty Red Leader, this is Blue Leader, Do you have a visual on all these trolls? Over."

VK Red Leader: "Roger Blue Leader, they are running scared from the Viking Kitties. Over."