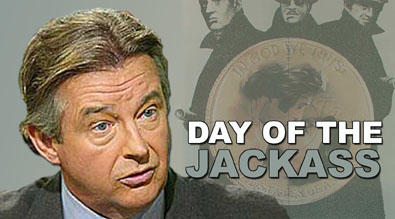 One man we trust...he served this land
And good men were under his command
The other one...well, you can see
The ***clown loves to drink sweet mint tea...he drinks sweet mint tea

The general says that Wilson lied
So what happened next...poor Joey cried...Joey cried

One we salute...deservedly
It's men like him who keep us free
The other is a camera whore...it's long overdue - show him the door
Show Wilson the door

The room was green where it took place
Joe Wilson had the smuggest face
He starts to blab...oh, what a guy
He says "My wife Valerie's a spy...a CIA spy"

One man we trust...he served this land
Good men were under his command
The other one...well, you can see
The ***clown loves to drink sweet mint tea...he drinks sweet mint tea

One we salute...deservedly
It's men like him who keep us free
The other is a camera whore...it's long overdue - show him the door
Show Wilson the door

TOPICS: Your Opinion/Questions
KEYWORDS: cia; darkplot; plame; vallely; wilson
1 posted on 11/09/2005 6:44:40 AM PST by doug from upland
[ Post Reply | Private Reply | View Replies]
To: doug from upland
DFU does it again! Although I couldn't play the MIDI link to confirm the song (issue on my side), the lyrics appear to fit with the Three Dog Night song called Black and White and (thankfully) not with the Michael Jackson tune of the same name.
2 posted on 11/09/2005 7:07:07 AM PST by buzzyboop (no tags, no fuss)
[ Post Reply | Private Reply | To 1 | View Replies]
To: doug from upland

I would rather show ol' "Wimpy" Wilson the bottom of my boot on his a**. He is such a POS I can't even stand to type his name. The really unfortunate thing is, I have a very dear friend by the same darn name. He catches hell from everyone about it, and thank goodness, he treats it like a joke!! ( he said he wishes his wife looked as good as Val's pictures did!, but she wasn't around when he said that either!)

If the general's picture cannot be seen, you can get it here --- http://www.kepplerspeakers.com/speakers/pics/vallely-p.jpg

Was the identity of Joseph Wilson's wife Valerie Plame really a deep dark secret before she was "outed" by columnist Robert Novak in July 2003?

The number of witnesses now saying "No" has climbed to four - and none of them have apparently been interviewed by Fitzgerald's investigators.

On Wednesday, Wayne Simmons, a 27-year veteran at the CIA, told Fox News Radio: "As most people now know, [Plame] was traipsed all over Washington many years ago by Joe Wilson and introduced at embassies and other parties as 'my CIA wife.'

Last week, Maj. Gen. Paul Vallely told WABC Radio's John Batchelor that during a 2002 conversation with Wilson while the two waited to appear on a TV show, Wilson casually mentioned that his wife worked at "the Agency." In Oct. 2003, NBC's diplomatic correspondent, Andrea Mitchell, told CNBC that Plame's occupation "was widely known among those of us who cover the intelligence community and who were actively engaged in trying to track down who among the foreign service community was the envoy to Niger."

Mitchell added: "So a number of us began to pick up on that."

And in Sept. 2003, NationalReviewOnline's Cliff May wrote that when Plame's CIA connection was mentioned in Novak's column - "That wasn't news to me."

"I had been told that [Plame was CIA] - but not by anyone working in the White House. Rather, I learned it from someone who formerly worked in the government and he mentioned it in an offhand manner, leading me to infer it was something that insiders were well aware of."

The day his report appeared, May told the Fox News Channel's John Gibson: "I knew this, and a lot of other people knew it."

In fact, rumors now swirl around Washington that Plame used to take her friends to lunch at the CIA's cafeteria.

So what has Mr.Fitzgerald - who was hailed as a "prosecutor's prosecutor" only weeks ago - done with the avalanche of testimony that contradicts his stated claim that Plame's job "was not widely known"?

In the six days since he's gone public, Gen. Vallely says prosecutors have yet to contact him.

Ms. Mitchell has been mum since her "widely known" comment resurfaced last week, offering no indication whether Fitzgerald has bothered to check her story out.

If Mr. May has been interrogated, he's also keeping it to himself.

And Mr. Simmons has made no mention of any contact with Fitzgerald's team.

On the other hand, the prosecutor's prosecutor made a big show of interviewing two of the Wilsons neighbors just four days before he announced his indictment of Lewis Libby - in a bid to establish whether Ms. Plame's occupation was indeed secret.

It was, as far as her neighbors were concerned. But the revelation that Fitzgerald had waited till the last minute to confirm such a key aspect of his case raised more than a few eyebrows.

Now, with four witnesses on the record saying they knew what the Wilsons' neighbors didn't - and two of those witnesses coming forward even before the Leakgate investigation began - it's beginning to look like Mr. Fitzgerald deliberately ignored critical testimony that would have compelled him to close up shop well before he ever got to Mr. Libby.