As FReepers are probably aware, Jayna Davis, indefatigable reporter and author of THE THIRD TERRORIST, is on the case of the OU suicide bomber. A local FReeper is giving her assistance. Here are some of the highlights of our discussion a short time ago:

1 - she has spoken to the feed store owner, Justin Ellison . . . Joel Hinrichs III exhibited strange behavior while in the feed store trying to buy ammonium nitrate . . . the store owner asked why he wanted it, and Hinrichs turned away and started mumbling to himself

2 - Hinrichs was dressed in a photographer's vest that was stuffed . . . a wire was noticed sticking out of it

3 - a plain clothes officer was in the store at the time and witnessed what happened . . . Jayna is not clear who got it, but someone got the plate number to track the guy

4 - they did a background check and he came out clean . . . Jayna reminds us that he was a "lily white," just like McVeigh and Nichols

5 - Norman PD could not confirm much for Jayna because this has gone up the food chain . . . they did answer a few questions about procedure, however . . . this would have gone to a special ops task force . . . but what about the Joint Terrorism Task Force (JTTF)? . . . Norman, Oklahoma has no budget for an officer or a JTTF office! . . . Jayna was stunned . . . the area around OKC is on the front line . . . Norman was the home of the former chief pilot of Osama bin Laden . . . Moussaoui got his flight training there . . . Atta and Alshehhi visited the Airman Flight School in Norman . . .Minepta's mosque is there . . . the VP recruiter for the overseas Al-Fatah network was in Norman

6 - the police in Norman did their job after the report of the feed store incident . . . they knew it was Hinrichs right away after the bombing - they knew it before DNA tests . . . Jayna wonders if their quick action prevented a major casualty count . . . Jayna wonders if they possible had done a "knock and talk" on him before the event to shake him up

7 - a local reporter who verbally attacked Jayna before is at it again . . . the reporter is kissing up and apologizing to the local Muslim community

8 - a security guard at the stadium would not give Jayna info about whether Hinrichs tried to get in with the backpack at halftime . . . apparently, that may be the time when some of the crowd leaves the stadium and comes back with alchohol - so the guards look for that . . . Jayna thinks that, had he planned it better, there was a possibility that he could have gotten in with the crowd at the beginning of the game

9 - officials are denying that there was something else that did not detonate . . . there are differing stories in the news

10 - how is this for quick action and approval? . . . OU is erecting concrete barriers at the stadium to prevent a truck bombing

Interesting!! And I don't know if you're reading too much into it, but you've posed some interesting situations.

"Could they have been US agents tailing Hinrichs or would it be more likely they were from the other side?"

"Stand W, is this maybe the odor you smell from the Mosque?"
Yes, indeed! It fits! And that explains the bad teeth!"

Might also explain why there's been no search of the mosque. If I was one of you Norman folks, I'd steer well clear of the place.

LOL--as if they didn't know! We were quite open about it, even smiled and waved at some guy who came out and glared at us.

I didn't hear that part. They stared and glared at you? I wish you would have had a big FreeRepublic sign for them.

Just one guy who came out as we were getting ready to leave. They shouldn't mind too much, should they? I mean after all, members of his "religion" are always taking pictures of buildings, bridges, oil refineries, dams, and son. Turnabout's fair, right? ;)

"son" should have been "so on"--spell check doesn't catch everything!

Also,10 years to the day that Sheik Omar Abdel Rahman and 9 others were convicted for their involvement in a conspiracy to plant bombs at New York landmarks like the United Nations building and FBI offices. These people were also accused (but not convicted) of being involved with the 1993 bombing of the World Trade Center which cause in six deaths and more than one thousand injuries.

Yep! Any radio transmitter that has a receiver with the same frequency would work.

Thanks for your help, konaice! I'll tinker around with the controls a bit more. I know I was able to get 3d (or something like that) one day but haven't been able to do it since. Arghhhh...

What kind of content do they have on the pay side? Is there a way to get a date on when these images were taken?
235 posted on 10/06/2005 12:50:10 PM PDT by hummingbird (21st Century Newsreporting - "Don't get me started!")
[ Post Reply | Private Reply | To 167 | View Replies]
To: JustaCowgirl
I love maps, too, and was disappointed that I couldn't see the Katrina and Rita maps because we used to live in NO and I wondered what the old neighborhood looked like.

There was a report on another unmentionable site that indicated LE did find holes in trees that looked like they were created by nails, but failed to mention whether the nails were found.

I don't know how fast a crime scene can be cleaned up, but if the authorities were watching him and there were no real eyewitnesses who hung around, I assume things could be sanitized pretty quickly.

DOug only thing I'm getting is red Xs.

The vested interest that the Left has in the death of the nation, is as nearly as disgusting as their pursuit of it.

239 posted on 10/06/2005 7:49:06 PM PDT by Robert Teesdale
[ Post Reply | Private Reply | To 105 | View Replies]
To: JustaCowgirl; doug from upland; WhistlingPastTheGraveyard; PhiKapMom
From Zombietime, blog referenced by Malkin who is covering this story 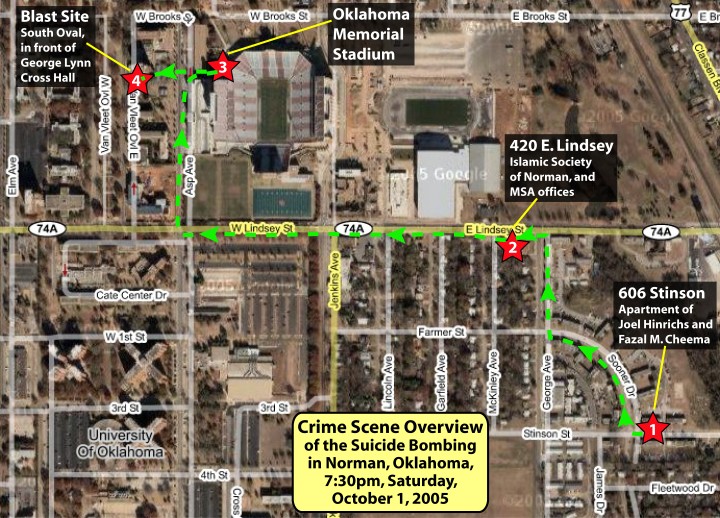 This image (based on a NAVTEQ satellite image provided by Google Maps) shows the relevent sites related to the bombing that killed Joel Henry Hinrichs III at 7:30pm on Saturday, October 1, 2005. The dotted line traces a possible route taken by Hinrichs that evening.

2. Islamic Society of Norman. According to THIS ARTICLE at NewsOK.com (site may require registration [free]), Cheema attended a "nearby mosque," and the FBI was looking into the possibility that Hinrichs also attended the same mosque. THIS SITE shows that there is only one mosque in the vicinity, The Islamic Society of Norman, which is only three blocks away from Hinrichs' apartment, at 420 E. Lindsey. THIS DIRECTORY shows that 420 E. Lindsey is also the office of the University of Oklahoma chapter of the Muslim Students Association, confirming that this was mosque attended by Cheema and possibly Hinrichs.

3. Oklahoma Memorial Stadium. At the time of the explosion, a football game was being played at the campus stadium, with 80,000 fans in attendance. According to this article at NewsOK.com (again, NewsOK may require registration), "One OU senior, Adam Smith, of Oklahoma City, however, said a stadium guard Saturday night told him 'a guy had sprinted off' outside Gate 6 after refusing to let his backpack be searched." If Hinrichs had walked from his apartment to the blast site, he would have walked right past the stadium. I couldn't find exactly where Gate 6 was, but THIS PAGE shows that Section 6 is on the west side of the stadium, though I don't know if Gate 6 leads to Section 6. In any event, the west side of the stadium is the point closest to the blast site, and if someone "sprinted away" west from the stadium, the first place he would come to is the very place where the explosion happened.

What does all this information suggest about Hinrichs' movements on the evening of the blast? The map composite above shows each location, and the likely route he took before he died in the explosion.

News is breaking quickly on this case. If you have links to hard information that you think would be useful to add to this page, send them to tips@zombietime.com.

Until then, here is a selection of other interesting links related to this case:

Breaking link: NewsOK.com: Television report confirms that Hinrichs recently spent much of his time at the Islamic Society of Norman

Tapscott's Copy Desk: Exclusive -- tree at bomb site shows evidence of round shrapnel holes -- possible evidence of a bomb intended to cause harm to others.

bellaciao.org: OU President David Boren, who has connections to the intelligence community, is trying to downplay the incident, because of school debts related to the stadium.

Norman Transcript: The explosion was so powerful that it was heard four miles away.

WFAA.com: The stadium was "vibrating" from the force of the blast (link may require free registration).

Associated Press (in 2002): Zacarias Moussaoui, the "20th hijacker" of 9/11, was connected to the Islamic Society of Norman.

Oklahoma Daily (repeat of link above): Hinrichs was vaporized from the waist up by the bomb.

Overview of news links related to the case.


The following links may be sensationalizing, so take their claims with a grain of salt:


Other blogs with interesting coverage:

Fanblogs: Overview of terroristic aspects of the case so far.

AR15.com: If you have the patience to read through the whole thing, this thread has several eyewitness accounts of the blast and details about Hinrichs' activities.