RAMADI, Iraq - Once Marine Gunnery Sgt. Michael Burghardt realized he could wiggle his toes and fingers, he had one message for the insurgents who wounded him - defiance.

Burghardt, of Huntington Beach, Calif., started his third tour in Iraq trying to beat the insurgents to the IEDs - improvised explosive devices - and disarm them before the insurgents could set them off.

As is often the case, Burghardt and his Explosive Ordnance Disposal team were accompanied to a bomb site Monday by the First Platoon, 167th Cavalry of the Nebraska National Guard.

One IED had blown up a Bradley fighting vehicle and killed a U.S. soldier. As often happens, the insurgents left behind more IEDs. Burghardt disarmed two bombs that were found - quick action that probably saved the lives of several Nebraska soldiers.

But he couldn't get to a third.

When word spread that the third device had been found, 167th Capt. Jeff Searcey of Kearney, 1st Lt. Matthew Misfeldt of Omaha and their men hit the ground as a blast exploded skyward.

But with two new young Marines in his ordnance disposal unit - and the insurgent attackers undoubtedly looking on - "I didn't want them to see the team leader carried away on a stretcher," he said.

So after the Nebraskans tended to wounds that reached from his boot tops to the small of his back, Burghardt rose to his feet and reached back with a one-finger salute for his attackers.

"I was angry," Burghardt said.

IEDs - which can be roadside bombs, car bombs or other booby traps - increasingly are the weapons of choice for the Iraqi insurgents.

Unwilling or unable to attack U.S. forces head-on, the insurgency has used the hidden explosives, often detonated by remote control. Some analysts have estimated that nearly 12,000 IED incidents occurred in Iraq in 2004.

The Explosive Ordnance Disposal units are assigned to locate, identify, disarm and dispose of IEDs. The Nebraskans alongside Burghardt's unit provide security at the scene, guarding the perimeter while the EOD teams do their dangerous work.

The 1st Platoon has been on 80 such missions, including some false alarms, since the 167th Cavalry arrived in Ramadi about 90 days ago.

Working together, the ordnance disposal Marines and the Nebraska National Guardsmen have developed a mutual respect - there's no Army-Marine trash-talking here.

"The biggest threat to us in Iraq is IEDs. We love working with them. They make us better soldiers," Misfeldt said.

"I feel part of this Army team," he said. "They take care of us like brothers."

Burghardt received the Bronze Star during his last tour of duty for disarming 64 IEDs. This week's incident was his first injury.

Burghardt, 35, wouldn't accept painkillers when he was brought back to camp by the Nebraskans. He knew he might need them later. And he's not looking to leave Ramadi for five more months.

"I don't want a ticket out," he said. "I want to stay here so we can take as many people home as possible."

Soldiers all the way up to the brigade's commander, Col. John Gronski, viewed a photo of Burghardt - on his feet, arm extended and middle finger raised - as the embodiment of the American warrior.

As for Burghardt, he said he wanted to send a message to the insurgents who failed to kill him.

"I knew there was somebody disappointed out there."

That picture is now the backround on my computer. That marine rocks!

A pleasant change from not very long ago when NG was treated like a step-child when it came to uniforms and equipment.
4 posted on 09/24/2005 7:52:03 AM PDT by BenLurkin (O beautiful for patriot dream - that sees beyond the years)
[ Post Reply | Private Reply | To 1 | View Replies]
To: Hat-Trick

OOOOOoooohhhhhh RRRrrrrraaahhhhh. Don't it make you proud to be an American?

Semper Fi to all Marines and to the rest of the service men and women serving their country.

If he'd only salute Sheehan.

Thanks for posting this great story.

This Marine is a true hero and warrior.

8 posted on 09/24/2005 7:57:42 AM PDT by Mrs.Nooseman
[ Post Reply | Private Reply | To 1 | View Replies]
To: Hat-Trick
The U.S. Marine Corps has always impressed this flyboy with their "can do" spirit. Once again America's finest defy the cowardly Islamic Fascist Jihad in their attempts to enslave all of humanity. I once again stand humbled and grateful for their sacrifices on our behalf.
9 posted on 09/24/2005 7:57:51 AM PDT by KC-10A BOOMER (If flying 2 airplanes in close vertical proximity is not safe, why did I do it for a living?)
[ Post Reply | Private Reply | To 1 | View Replies]
To: BenLurkin
That is encouraging. Hopefully our contingent of elected representatives will continue to fight for funding and properly equipping these heroes.

What will be discouraging is when our small but vocal collection of peaceniks start to write their letters to the editor decrying the fact that we have a picture of a Marine making an obscene jesture on the front page of our newspaper.

I think this would make a great poster/picture to display as a counter-protest at the next "Nebraskans for Peace" rally.

I am proud of this Marine, Sgt. Burghardt.

OK, who has that graphic of the Big Brass Ones I saw the other day?

Bump for the Gunny.

Just gotta love that picture!!! Here's to you, Cindy!!

Hell yes! Our soldiers are the greatest, and this is going up for desktop honors : ) 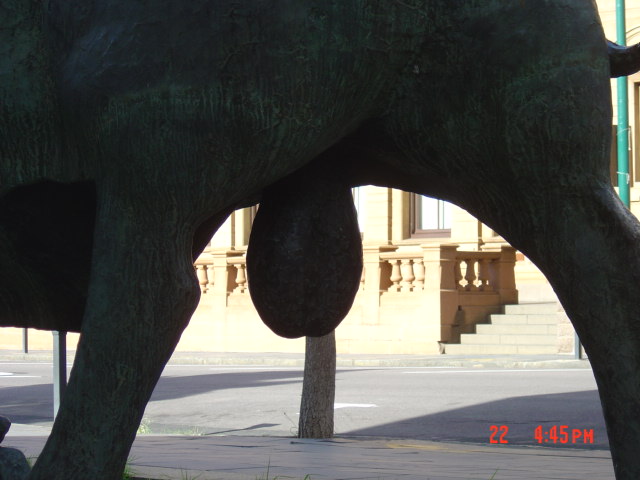