"The West's Last Chance" is a fire bell in the night.

Tony Blankley, author and son of survivors of the Blitz, is a writer deeply schooled in history who believes that the West, in its lassitude toward a metastasizing Islamist menace, is behaving like Britain and France in the "Phony War" of 1940:

My central assertion is that while we in the United States and Europe have vast resources for protecting ourselves, we have thought ourselves into a position of near impotence ... In Europe, there is a blind denial that radical Islam is transforming the world.

Events like the London bombings and ritual murder of Theo van Gogh by a crazed Muslim on a Holland street, he believes, may be shaking the West out of its somnolence toward an existential threat:

[I]t is beginning to dawn on Europeans that the combination of a shrinking ethnic European population combined with an expanding and culturally assertive Muslim population might lead to the fall of Europe's Western Civilization within a century.

How we arrived in this perilous situation is well known. In what historians, centuries hence, will call the Great European Civil War, Western nations, from 1914 to 1918 and 1939 to 1945, butchered one another with such wild abandon they destroyed all the European empires it took centuries to build. And the colonial subjects then began to migrate to the West and colonize the mother countries.

There are now 20 million Muslims inside the House of Europe. Ghettoized in the great cities, professing a faith that was the rival of Christianity for a thousand years, they have not assimilated. Now their children, though educated in European schools, are fast becoming alienated from Europe 's culture. Bored by the hedonism and materialism of La Dolce Vita, they are rejecting Western values.

These Islamic young call to mind German orphans of the Great War who were taught that Germany had been the victim of a "stab in the back." As these youth were instructed by nationalist teachers that it had been Allied treachery and duplicity at Versailles that disarmed, divided, dismembered and disgraced Germany, so the Muslim young of Europe are hearkening to the Western-hating imams of the urban mosques.

There, they are taught the gospel according to bin Laden: that the West today, led by the United States, imposes puppet regimes on Islamic nations, aids Israel in persecuting the Palestinians, steals Arab oil, defiles the Holy Land, crushes heroic peoples who resist, like the Iraqis, and poisons the souls of the Islamic young with its decadent culture.

Like young Nazis raised to hate, always a unifying force, these young Muslims are taught in these mosques that a heroic life, noble death and paradise are to be found by emulating Muhammad Atta and his "martyrs."

This is a powerful narcotic for the deracinated Muslim young. And a large fraction of these youth accept these teachings, as a smaller, more dangerous minority prepares to act on them. In Western society, as vulnerable as a 747 in flight, one does not need too many suicide bombers to create havoc and force Western nations to restrict their freedoms.

With Blankley's analysis of the clear and present danger, rooted in his broad reading of the writings of the Islamists, few will disagree. And one hopes his optimism about a revival of Christianity, a new appreciation of the importance of families and a Europe awakening to the enemy within is justified.

But his policy prescriptions are nothing if not controversial.

Recognizing that a "War on Terror" does not tell us who our enemy is, he calls for a formal declaration of war on "radical Islam" and amending the Constitution if necessary to deal with the enemies in the United States . He yet believes in the wisdom of invading Iraq and wants to expand U.S. armed forces for future expeditionary wars on radical Arab and Islamic regimes.

One need not read too far in his book to know Blankley not only endorses the Patriot Acts I and II, he believes a Patriot Act III is overdue. After declaring war, we should secure the borders, create a biometric national ID card for all citizens, use ethnic profiling to determine who needs extra patting down at the departure gate and deport immediately non-citizens who agitate for violence against our government or society.

If government does not act, he warns, vigilantes will, but that will not save Western Civilization. An unabashed Atlanticist, he concludes on a Churchillian note:

"If the United States and Europe act together as the West, in defense of our common values, we can undo the nightmare scenario of the Islamists and defeat this new threat of global tyranny that is every bit as dangerous as the Nazi threat that the Greatest Generation met and extinguished more than 50 years ago."

With a history of almost 14 centuries of mass murder, Islam has no moderate segment. The main stream is extremist.

2 posted on 09/21/2005 9:55:50 AM PDT by ncountylee (Dead terrorists smell like victory)
[ Post Reply | Private Reply | To 1 | View Replies]
To: Irontank
Bored by the hedonism and materialism of La Dolce Vita, they are rejecting Western values.

Fine. Tell 'em to move to Iran if they're so all-fired holy in their Islamofascist idiocy.

Amen. It's so clear and yet so many are blind. Every day in our country (at the UN) they plot our demise. They blow up everything that is good, and still so many are blind. I have become speechless at the ignorance of leaders and apathy of the public.

I'm intolerant of any religion that believes in killing people for the sport of jihad.

May they burn in hell.

I saw this last night. Farrakhan calling for the "destruction of the Red Cross". 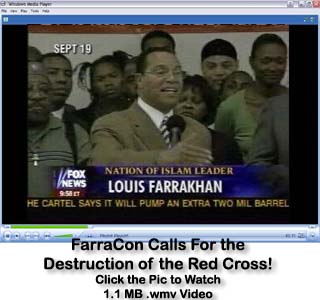 For starters, recommend that your friends, associates read and inform themselves about the truth of islam.

It is a very clear, straight forward information resource.

8 posted on 09/21/2005 10:04:20 AM PDT by milford421
[ Post Reply | Private Reply | To 1 | View Replies]
To: Irontank
Recognizing that a "War on Terror" does not tell us who our enemy is, he calls for a formal declaration of war on "radical Islam" and amending the Constitution if necessary to deal with the enemies in the United States.

I thought we were now in a "struggle against global extremism" (that incidentally places Billy Graham and the Pope in the same pot as Islamic true believers like Ahmedinejad and Zarqawi).

And Winn's Profit of Doom for the truth in Mo's own words.

all of Islam is radical.

I agree w/ 2banana. I have thought a lot about what may happen and believe that in the end the USA and the West will not succumb (sp?) to the Muslim Horde. Unfortunately, the liberal parties and governments will let things (immigration, etc) get so out of hand, people will turn to to the extreme right for the fix. When the government fails to protect people (NOLA looting, crazies running planes into buildings), people will take their own action. Remember the Freikorps in 20s Germany. I would hope that more conservative democratic governments could solve the problems before this happens, but the record of this administration is not heartening --- and I am a loyal Bushie, having made my first political contribution in 1980, illegally I suppose, to Papa Bush when I was still in high school.

You wanna explain how "National Socialism" is the extreme right? ". Hitler and the Brownshirts advocated the nationalization of education, health care, transportation, national resources, manufacturing, land distribution and law enforcement. Hitler was for taxing the rich and total and enforced public education (so that the next generation could be indoctrinated). He was also a gun-banner. Just stop me when I get to a "right wing" position...

13 posted on 09/21/2005 10:49:41 AM PDT by 2banana (My common ground with terrorists - They want to die for Islam, and we want to kill them.)
[ Post Reply | Private Reply | To 12 | View Replies]
To: DocRock
Yeah... I saw that too. And the night before one of his "ministers" was on O'Reilly complaining that the Red Cross and FEMA had too many white people, not enough blacks. LOL... Red Cross is made up of volunteers and FEMA will just about hire anyone in a disaster.

That said... is no one concerned that within our sovereign borders there is a Nation of Islam? A Nation with it's own military?

I feel the elements for a new Civil War in this country are coming together.

Of course those are not traditional conservative positions. Extreme nationalism, strong police, strong military, cozying up to Krupps and IG Farben might seem to be by some. Look at most received history or political texts and the Nazis are considered "extreme right" for purposes of the narrative and discussion. I don't necessarily agree. A social democrat might not consider commies to be "left" for that matter. Are people here always so pedantic?

Hmm. I'm not so sure. I think the USA may split up by century end. I see a lot of division and the unsustainable policies will cause hard times. 1930s style. And I don't see us all pulling together in the same direction at that point.

17 posted on 09/21/2005 11:06:19 AM PDT by Jack Black
[ Post Reply | Private Reply | To 12 | View Replies]
To: CharlesMiller
>Look at most received history or political texts and the Nazis are considered "extreme right" for purposes of the narrative and discussion. ... Are people here always so pedantic?

propagated by
left-wing activists trying
to revise the past.

some teachers approve
and many cocktail parties
give endorsement to,

you might find your time
here at the forum to be
trying to your nerves.

I am shocked at the rational discourse on this thread. Where are the knee-jerk buchanan-haters?