A local television station, WNYW/Channel 5, is refusing to run a provocative advertisement promoting a Democratic candidate for Manhattan borough president. And the campaign of the candidate, Brian Ellner, is charging that the station is doing so because the spot takes a swipe at President Bush.

The 30-second ad features Mr. Bush's face superimposed upon a middle-aged man's naked torso as Mr. Ellner says of the president that "the emperor has no clothes." Mr. Ellner also introduces his partner, Simon Holloway, in the spot - which the campaign says is the first time in city history that a gay candidate has introduced his or her partner in a campaign commercial.

Mr. Ellner said in an interview yesterday that representatives of Channel 5, a Fox affiliate, had told his campaign that they would not show the advertisement because it was "in poor taste."

"It's pretty clear it's an anti-free speech decision because of our criticism of the president," Mr. Ellner said.

"It's untenable and in my view it's anti-American." He added that the rejection of the ad was "disrespectful to voters."

Tim Arnold, a media adviser to Mr. Ellner, said the station had at first agreed to sell the campaign advertising time but then rejected the advertisement after seeing it. The campaign has already spent about $250,000 to put the ad on the air.

Mr. Arnold said that when he pushed for a more detailed explanation of the rejection, a station representative told him that the station believed the advertisement was "disrespectful of the office of the president."

Mr. Arnold said Channel 5 was the only local station to... 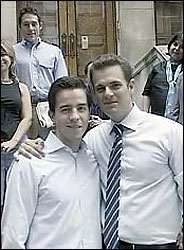 Brian Ellner, right, a candidate for Manhattan borough president, introduced his partner at the end of his commercial.
1 posted on 09/06/2005 3:29:33 PM PDT by neverdem
[ Post Reply | Private Reply | View Replies]
To: neverdem

Imagine their response if we superimposed Hillary's face over that of a donkey.

I live in Manhattan, and I keep getting Ellner's Bush bashing material in the mail. I just switched from being a Dem to the Republican party. The mail made me mad, and I sent it all back to Ellner, explaining that bashing like his was one of the main reasons I left the Democrat party.

Now what wil happen is all the news tv shows will play the ad for free and everyone will hear the message anyhow. See how the liberal media works?

Surely you didn't waste a stamp on it!

I'm at a loss for words. FReepmail me if you want on or off my New York ping list.

Quite a political base that the rats are centered on:

Bull! It's a pro-good taste, pro-class, pro- respect
for the Office of the President decision...and if
the classless, incompetant, unfit for office, poodle
doesn't like it,,,TOUGH!

Something queer about this picture. And what's with the cheek on th female in the left background.

Alas, I did waste a stamp on it. But when you live on the upper West Side, which is totally liberal and full of people suffering from Bush Derangement Syndrome, sometimes you just gotta speak up.

Welcome to the party of grown ups, that value life.

This sick pervert doesn't understand what free speech is. He is a festering tyranty who wants to force his views and his claims on the rest of us, using "Free Speech" in a perverted sense as the battering ram.

FOX news has the right to refuse whatever it chooses. That has not limited this person's ability to spew freely whatever he wishes. No one has detained him, silenced him, imprisoned him, cut out his tongue, or removed his hand. He can write and say what he wants...it is for others to decide, in their business or their personal lives whether they want to listen or pass on his sick claims.


Gaurunteed to be extinct in a generation...unless recruitment goals are met.

What the Fornication does he think running against Bush means for his qualifications to be borough president, anyway? It's like the dogcatcher candidate railing against the UN.

Good for you! But yer waaayy outnumbered by the slave class of subservient voters!

Yes, I am way outnumbered in NYC. I can't even tell my best friend that I'm a Repub now, because I don't think she would speak to me.

What part of NY are you from ?

I'm just outside the western NY mecca of liberalism and union stranglehold known as Buffalo.