A controversial Islamic cleric has left the UK for the Middle East, his spokesman has said, amid speculation he would be investigated for treason.

The news came as it was revealed police and lawyers were to consider whether some outspoken Islamist radicals could face treason charges.

The Crown Prosecution Service's head of anti-terrorism will meet Scotland Yard officers in the next few days. Abu Izzadeen and Abu Uzair, along with Omar Bakri Mohammed, are expected to come under scrutiny.

The crime of betraying one's country has long been regarded as one of the most serious of offences. The death penalty for the offence was abolished only in 1998 and it now carries a penalty of life imprisonment.

TRIO FACING SCRUTINY Omar Bakri Mohammed, cleric for al-Muhajiroun. Its successor group the Saviour Sect being banned. Said he would not tell police if knew of UK bomb attack plans; supported Muslims who attacked British troops. Abu Izzadeen, British-born, spokesman for al-Ghurabaa [the Strangers]. Would not condemn 7 July London bombings. Told BBC they would make people "wake up and smell the coffee". Abu Uzair, former al-Muhajiroun member, told BBC the 11 September attacks were "magnificent". Said Muslims did not "live in peace" with the UK any more.

But the government's reviewer of anti-terror laws, Lord Carlile QC, said he did not think it would be appropriate to bring treason charges.

The cleric last year announced he was disbanding the organisation - although its former members have been linked to two new radical bodies.

Mainstream Muslim organisations have denounced the cleric's views, saying that he does not represent the true voice of Islam.

Speaking to the BBC News Website, Mr Choudary - the former right hand man of Bakri Mohammed - said the cleric no longer believed Britain was a safe country for Muslims.

Abu Uzair and Abu Izzadeen were also expected to be investigated

"He flew out on Saturday and used a Lebanese passport that he recently got from the embassy." he said.

"What he has done is made the 'hirja' to another place because he has felt that he has been unable to practice his religion.

"He believes that war has been declared against Muslims in the country. He has decided to go elsewhere."

The Arabic word 'hirja' commonly means to seek religious sanctuary and refers to an event in the early years of Islam's history.

Mr Choudary said that Bakri Mohammed's final destination was at present unclear. He had no intention of going to his home country of Syria but may end up in one of the Emirate countries, he said.

The cleric had said his followers would soon be able to "access him" with a planned new presence on the internet and that the British people would hear from him soon.

Asked if Bakri Mohammed had gone because he feared being either deported or prosecuted for his militant views, Mr Choudary said: "He was not afraid to stay behind [in the UK] for any reason at all. It's a case of him being able to practice his religion.

"But he has always said that if the British people did not want him to stay, then he would go."

Mr Choudary said that Mr Mohammed's family had remained behind in Britain and that he had not disposed of his assets in the country - but he was "sure" that the radical preacher would not be returning because he did not hold a British passport.

Is this good or bad news? It seems like he escaped.

This animal left the UK alive?

That's one way to be rif of them.

Bummer. Should have just quietly shot him.

Now, he has been dun tossed inta de Briah Patch.

He beat feet..typical ...preaches hate ...incites hate....but when it came time for the this "leader" in the Muslim community to stand up and be counted .....he fled...just like Zarqawi...Bin Laden....and Zawahiri.

Well, we don't see the fearless leaders strapping on bomb belts, do we? No, they leave the one-way ticket missions to the rabble. Big of 'em. If the 80 virgin thing is so hot, how come none of the higher ups wanna go see Allah? 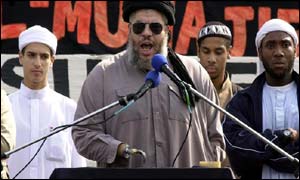 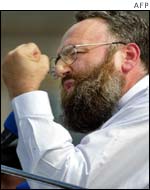 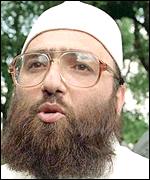 "He believes that war has been declared against Muslims in the country. He has decided to go elsewhere."

It appears that he declared war first, but when the Brits appeared willing to fight back, he turned tail and ran.

These hatemongers love to speak for all Muslims. It's up to the rest of the Muslim community to declare if he speaks for them, or to say that he does not.

For much too long most of the Muslim community has been unwilling to speak out and say that these radicals do not speak for them. That needs to change if Muslims want to be treated as friends not enemies.

And don't let yer wife's burka hit you in the ass.

Exactly - I don't understand this whole deportation fetish. It would be much better if these Al Qaeda supporters were locked up.

Britain needs to be clearing their enemy out of their land.
They have even been substidizing their enemy to kill the people of Britain from within. This is a new kind of story for history. History has never known such fools before.

Continuing to draw their welfare.


Bette yet, that their body parts were shoveled
into trash bags, with pigs intestines.

Well, this is probably true, since his religion consists
of murdering infidels and jews.

19 posted on 08/08/2005 3:36:38 PM PDT by tet68 ( " We would not die in that man's company, that fears his fellowship to die with us...." Henry V.)
[ Post Reply | Private Reply | To 1 | View Replies]
To: traumer
Said he would not tell police if knew of UK bomb attack plans; supported Muslims who attacked British troops. Abu Izzadeen, British-born, spokesman for al-Ghurabaa [the Strangers]. Would not condemn 7 July London bombings. Told BBC they would make people "wake up and smell the coffee". Abu Uzair, former al-Muhajiroun member, told BBC the 11 September attacks were "magnificent". Said Muslims did not "live in peace" with the UK any more.

I think we should deal with these intermediaries like the serial killers that they are. Their weapons of choice are young impressionable muslims.

Eventually we will have to deal with the source of the violence and hatred: the Qur'an and Islam.