Ottawa — Carolyn Parrish, the former Liberal MP who stomped on a doll bearing the likeness of U.S. President George W. Bush and was kicked out of caucus for her anti-American statements, is negotiating with senior officials in the Prime Minister's Office and the party to return to the Liberal fold.

"I am having discussions with some members of the party, but a lot of my colleagues want me back," she said in an interview yesterday.

The outspoken member of Parliament for Mississauga, Ont., said she will make up her mind by the new year.

Ms. Parrish, who was first elected in 1993, was thrown out of the Liberal caucus last year after a series of statements in which she referred to the Bush administration as "bastards" and "idiots."

"I do not inspire tepid responses in people," the 59-year-old MP said, noting that people either love her or hate her.

"So, I would imagine there are some around the Prime Minister who would rather slash their wrists than see me back, and there are others who think it would be lots of fun to see me back."

She called him "dangerous" and a "testosterone-filled general," and added that "somebody should put a clamp on his mouth."

Ms. Parrish, a self-described "peacenik," said she was particularly offended by Gen. Hillier's aggressive comments this month that the job of Canadian soldiers is "to be able to kill people."

He had been speaking to reporters about the Canadian troop deployment to Kandahar, where the troops will target terrorist "murderers and scumbags."

"They talk about me being outspoken," she said. "I'm speaking on my own behalf. This man is purporting to speak on behalf of the government, and I think he's dangerous.

"I'm totally offended by him. ..... We are also not a country that is going to easily throw away 100 years of peacekeeping reputation and noble reputation in the world by a testosterone-filled general, and I think somebody should put a clamp on his mouth."

She has complained to Defence Minister Bill Graham about the general's comments.

Meanwhile, rumours have been swirling around the halls of Parliament that the Liberals want Ms. Parrish back in the caucus.

In fact, there were whispers that some Liberal MPs have been keeping her close, ensuring that she knows she still had friends in the caucus and to show that she would be welcomed back. A federal election is expected early next year, and the Liberals under Paul Martin do not want another minority government. Senior Liberals fear that Ms. Parrish, who is popular in her Mississauga constituency, could win her seat in the next election as an Independent, or take away enough votes from the Liberal candidate to allow a Conservative to win.

The Liberal Party has yet to nominate a candidate in her riding. Sources say she has been negotiating her return with senior PMO official Karl Littler.

She is still a card-carrying Liberal and supported the Martin government on a series of nail-biter confidence votes, including the crucial May 19 budget vote.

Ms. Parrish is weighing her options: adhere to the party line and have a better chance of being elected or run as an Independent but have a free voice.

" ..... if you run as a member of the party, then of course you have to follow all the party lines on everything, whether you agree or disagree," she said.

This woman and the Liberal Party were made for each other - both are beneath contempt.

If it wasn't illegal to do so, I'd smash Parish square in the teeth with a hockey stick...Gen. Hillier gets it, Parish doesn't...

Oh man, not this bitch again.

She is an utter idiot. She refers to Canada's 100 years of peacekeeping. As a former teacher, she must have forgotten about Canada's involvement in WW1, WW2, Korea, Gulf War 1 (some would say 2...).

See, we have the same liberal bullshit up here too!!!

This woman is an idiot to say the least. She needs to have her face stomped on, literally, not just in doll form.

Only if the fine Canadian men who stormed Juno Beach were engaged in "peacekeeping." 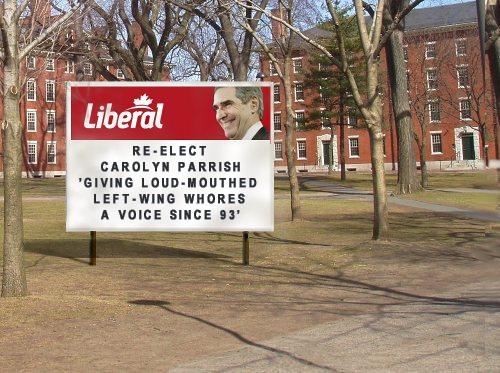 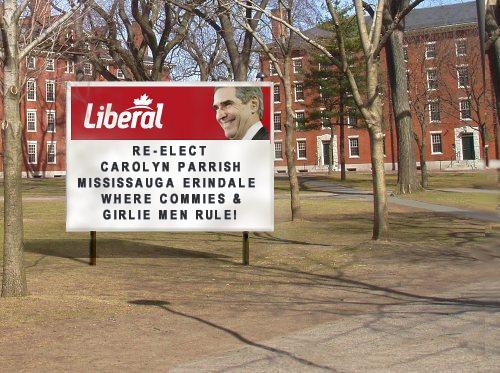 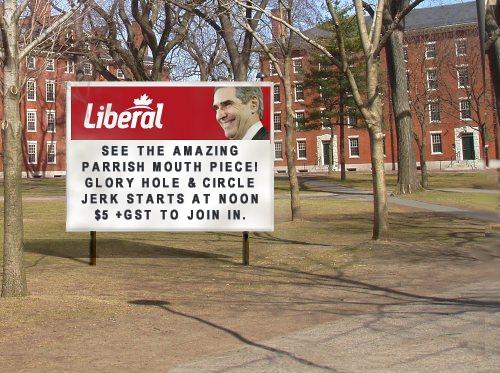