...After nearly 20 years and numerous enforcement escalations, the undocumented immigrant population continues to grow -- and restrictionist lawmakers continue to insist that throwing ever more money, men and material into border enforcement is the key to fixing the problem.

Yesterday, Senators John Cornyn (R., Texas) and Jon Kyl (R., Ariz.) introduced legislation that would authorize $5 billion over five years "to acquire and deploy unmanned aerial vehicles, camera poles, vehicles barriers, sensors" and other technologies. They'd also create a new 10,000-man army to raid businesses across America and make sure there are no illegal chambermaids working at Marriott. For this, we need Republicans?

Never mind that since 1986 the U.S. strategy of spending more and more money on militarizing the border hasn't worked. According to a recent Cato Institute study by Princeton sociologist Douglas Massey, "By 2002, the Border Patrol's budget had reached $1.6 billion and that of the [Immigration and Naturalization Service] stood at $6.2 billion, 10 and 13 times their 1986 values, respectively."

Over the same 16-year period, the number of border patrol officers tripled, and the amount of hours spent patrolling the border increased by a factor of eight. By 2002, Professor Massey notes, "the Border Patrol was the largest arms-bearing branch of the U.S. government next to the military itself."

Meanwhile, the illegal immigration flow has only increased, and all of this extra "enforcement" is arguably one reason. When illegals felt they could more easily cross the border, they'd enter the U.S. on a seasonal... basis or when they needed the money. Then they'd often return home. But with the difficulty of re-entry so much higher in the last 20 years, many more migrant workers choose to remain here permanently. The risk of staying is lower than the price of re-running the border gantlet.... 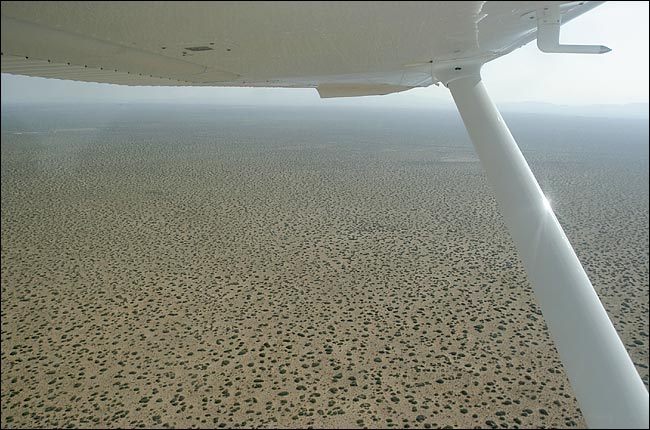 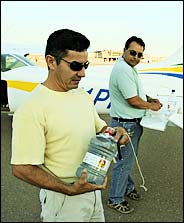 13 dead found in the desert yesterday.

It may not totally halt illegal immigration but it would go a HELL OF A LONG WAY TOWARDS SLOWING IT DOWN!!!

Illegal immigration is much in the news today and it is BAD. But, perhaps not for the reasons put forward to date.

Any time a law exists and is ignored, all laws are less respected. Thus the 65 mph speed limit and illegal immigration both contribute to our higher than needed murder rate.

There was no problem with illegal immigration in the 1950s. Why? Economic conditions in Mexico were bad then. That is an easy guess, they have always been bad in that Third World country and always will be until they get a Constitutional Democratic Republic that recognizes property rights and civil rights.

The reason was there were no jobs here in the United States. The jobs were being done by Americans.

Today, there are many job openings that cannot be filled by Americans.

We do need immigrants to do jobs Americans will not do. That pretty much describes any job that pays less than $12.50 per hour, after taxes. But, you say, the Minimum Wage is too low, $6.25 per hour here in Kalifornia. No one can live on $6.25 an hour. No one works for Minimum Wage here. PERIOD.

I need help keeping my yard. I pay $10.00 per hour for yard help, CASH! To a needy person from the city? Not hardly, they do not have to work. The State takes money from me at the point of a gun and gives it to them; they call it Welfare. I call it robbery.

The problem is Welfare. Welfare pays about $25,000.00 a year ($12.50 per hour) here. There are tens of thousands of people in the county who do not have to work. They live on my money, yet they won't cut my grass. There are thousands on welfare whose grandparents were on welfare.

Eliminate welfare. If you want to give aid to children, sterilize both parents who spawned children they cannot take care of. Do not let them reproduce more unproductive leaches on productive members of society.

Isn't is odd that those who find no problem in murdering children via "The Right to Choose" cannot grasp the benefit of sterilizing those who will not work?

Eliminate welfare, secure the border, grant work visas to those who want them.

Look at this fence and tell me again that it is difficult to cross. This might keep some cattle or sheep from crossing, but it will barely slow down people.

Somebody take the time to read Massey's testimony before the Senate committee and then re-read the WSJ article. It's as if the WSJ just took his testimony and printed it.

I assume the WSJ doesn't like Cornyn's bill (won't register). Another indication it's worthy of our support.

And I have never seen serious enforcement of immigration and deportation laws. Why should I expect this after the Cornyn/Kyl bill is passed? Whom do I trust?

No, for this we need Americans.

"I assume the WSJ doesn't like Cornyn's bill (won't register). Another indication it's worthy of our support."

Agreed, if WSJ doesn't like it... then this bill must be "on the right track".

13 posted on 07/20/2005 8:35:19 AM PDT by taxed2death (A few billion here, a few trillion there...we're all friends right?)
[ Post Reply | Private Reply | To 9 | View Replies]
To: dennisw
Since the notoriously open borders Wall Street Journal hates this bill then maybe it's a good one. That is my instinctive reaction as well. This bill will be a tough one to get passed. The WSJ and big business in general will prefer the status quo, which is working just fine as far as they are concerned.

The status quo: a growing number of illegals willing to work, No effective government enforcement. Industry has no responsibility for anything other than wages and we taxpayers subsidize it all. Anything short of unrestricted access to cheep labor will be fought. Border and national security be damned.

FAIR says this is a good start. But can the Feds be trusted to enforce the law on this and punish/deport those who try to finesse it's rules??? Do you trust the Feds? I don't.

15 posted on 07/20/2005 9:48:51 AM PDT by dennisw ( G_d - Against Amelek for all generations)
[ Post Reply | Private Reply | To 14 | View Replies]
To: OESY
Immigration is about R-A-C-E and the politics of R-A-C-E, there was virtually no talk about economics when the '65 disaster was passed. It's supporters mostly consist of those who are actual white-hating racists and those, like the good folks at the WSJ, who are objectively white-hating racists. Conservatives (and by no means does that included everyone or even the majority at the WSJ) and Republicans have supported mass immigration not for economic reasons but for political ones: to avoid being labeled as racists by the left and media establishment. One sign of this is the absolute absence of any discussion whatsoever of the future social, political, and even economic consequences of this wave of immigration. Immigration is primarily an ideological policy not economic.

Never mind that since 1986 the U.S. strategy of spending more and more money on militarizing the border hasn't worked. . .

This may be true in a technical sense, but it is a lie. There was a story a few weeks ago that mentioned that during the Clinton administration over 400 businesses (a trivial number) were raided for illegals in one year while last year the Bush administration raided . . .wait for it . . . 3! To say beefing up the border patrol proves tougher enforcement doesn't work is like saying hiring police but assigning them all to one district proves law enforcement doesn't work. Immigration laws are not being enforced and the WSJ knows it.

But with the difficulty of re-entry so much higher in the last 20 years, many more migrant workers choose to remain here permanently.

There's little proof that this is true, it is deception from the WSJ. Most of these illegals will stay here no matter what happens on the border. PS, any of their children born here will be American citizens, a fact the WSJ dishonestly doesn't want to deal with.

I live in a very rural area in the mountains of Northern California, and by personal knowledge can attest to the fact that people will and do work and live on minimum wage. There are not very many jobs here, and since the number of individuals exceed the number of jobs by a significant amount, the vast majority of available positions pay only minimum wage. There are some that pay more, granted, but not all that much more nor are there really that many of them. This is primarily a seasonal-work area, since when the snows arrive many people leave for the valley and jobs dry up, so most of us strive to find work that both pays more than minimum wage and lasts longer than just the summer months.

When the only work available pays only minimum wage, you work or you starve. If you are unwilling to do the work, there is always someone else who will -and the position will be filled very quickly indeed. The concept that americans will not work for minimum wage is simply and totally wrong.

17 posted on 07/20/2005 10:58:22 AM PDT by Utilizer (What does not kill you... - can sometimes damage you QUITE severely.)
[ Post Reply | Private Reply | To 6 | View Replies]
To: dennisw
Do you trust the Feds? Well if the Real ID Act is any indicator no. The Act passed less than 6 months ago in the Senate and it called for 2000 new BP agents in FY-06. Two days ago the Senate passed the FY-06 supplemental appropriation but collective “forget their pens” and did not approve the funding for the new agents. They have been playing this game for years.

I still support this bill however as I think it is reasonable approach to immigration policy and the status quo is dangerous and irresponsible.

I get it, if we spend less money and effort on enforcement, the situation will get better. Is there nothing those that favor the explotation of illegal immigrants won't stoop to in order to ensure their precious flow of illegals continue.

As for the Border patrol being ineffective even with millions of dollars thrown at them every month. Just hire the minute men. You would get a much better result at a fraction of the price.

19 posted on 07/20/2005 11:29:31 AM PDT by NavVet (“Benedict Arnold was wounded in battle fighting for America, but no one remembers him for that.”)
[ Post Reply | Private Reply | To 1 | View Replies]
To: Rodentking
Good points. Welfare is a permanent part of our State thanks to the history of the country in respect of mechanization. Along with precision-guided munitions, the Space Shuttle, and municipal utilities comes welfare. The country was agrarian at first, but mechanization came to the farms as hard and heavy as it came to commerce. Manufacturers, originally state-run, came to be legal persons and assumed a life of their own, which led to organic growth and the reduction of people to a resource. Immigrants could turn to farming or factories for 'making' a living, but the farms were becoming factories also and the immigrants were resources either way. Regulation of the greater machine--the National Economy--was poor in the new mechanistic environment, so, gradually new institutions were created to bring stability. Welfare, which is multi-faceted and not all bad or all good, will be around as long as we insist on stability and a mechanized society.

Still, our history is one of adjustments, and clearly there is something out of alignment with illegal immigration that needs adjustment.