Deputies of the nationalist Liberal Democrat faction in the State Duma on Wednesday were involved in a fistfight with other parliamentarians, the RIA-Novosti news agency reports.

The leader of the Liberal Democrat party and a deputy speaker of the lower house, Vladimir Zhirinovsky, said that numerous violations had been registered during the elections in the Yamalo-Nenets district and sharply criticized the work of the incumbent head of the region, Yuri Neyolov.

“People like Neyolov are a disgrace to our country. To demonstrate our protest we are leaving the session hall,” Zhirinovsky said.

As the deputies of the Liberal Democrat faction were leaving the hall they started a fistfight with other MPs who objected to their position. For five minutes the State Duma chairman, Boris Gryzlov, called on the parliamentarians to stop fighting and to restore order.

Parliamentary elections in the Yamalo-Nenets Autonomous District were held on March 27. The regional elections commission has reported that the pro-Kremlin United Russia party won over 60 percent of the votes. The nationalist Rodina party came second with over 11 percent of the votes and the Communist Party got slightly over 7 percent.

About 14 percent of the electorate voted against all candidates.

The turnout in the autonomy’s legislature elections was 44.66 percent. No major violations of electoral legislation that could influence the results of the voting were registered. 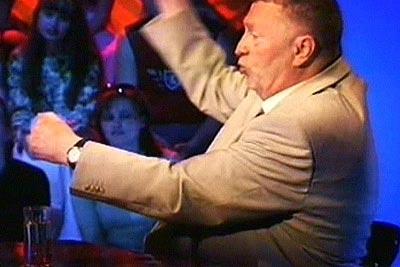 TOPICS: Foreign Affairs; News/Current Events; Russia
KEYWORDS: russia; russian; vladimirzhirinovsky; zhirinovsky
1 posted on 03/30/2005 7:34:05 AM PST by lizol
[ Post Reply | Private Reply | View Replies]
To: lizol
In my wildest dreams Dascle, Kennedy, Waxman, Leahy, Durbin and many others get popped in the month.
2 posted on 03/30/2005 7:41:37 AM PST by Popman (The American Left: Goose Stepping into the Future)
[ Post Reply | Private Reply | To 1 | View Replies]
To: lizol

This isn't unusual in the Duma.

Let them fight each other. Keeps them out of mischief.

You want to see fights: go to the Japanese or S.Korean parliments, there you'll see some doozies. Zheranovsky is an idiot on a bright day, and he doesn't have to many of those.

MOSCOW, March 30 (RIA Novosti) - The State Duma has rid vice-speaker Vladimir Zhirinovski of the right to speak at plenary sessions during one month. The resolution has been voted for by 373 deputies of the lower parliamentary chamber, against by 35 at no abstentions. At the morning plenary session, a brawl happened between representatives of the LDPR and Rodina (Fatherland) factions.

"During the break we studied the shorthand and the video materials and took a decision that relieving Zhirinovski of his vice-speaker post and the relative resolution had to be thoroughly reconsidered", head of the Duma regulations committee Oleg Kovalev told the plenary session. The resolution gives an assessment of "the outrageous behavior" of the deputies, which is "beyond common sense", Kovalev said. Kovalev and Gennadi Raikov (head of the Duma commission for mandates and ethics) have decided that "both the parties are guilty in equal measure".

On Wednesday parliamentarians refused to include in the agenda ridding Zhirinovski of his vice-speaker powers. At the required 226 votes, only 114 deputies voted for, 76 against at no abstentions. The State Duma speaker Boris Gryzlov has instructed the regulations committee to prepare by tomorrow's session a draft resolution on applying to the prosecutor general for his assessment of the conflict.

At the Duma session on Wednesday, the LDPR faction declared disagreement with the results of regional elections in the Yamal-Nenets autonomous area and the desire to walk out of the conference hall. When it was leaving the hall, a wrangle happened between the vice-speaker and deputy Andrei Savelyev of the Rodina faction, which then grew into a brawl.

No, I haven't. got a link? US television for the most part doesn't know there is a world past our borders.