CINCINNATI (AP) - As the Nazis took power in Germany and the world turned its back on Jewish refugees, four brothers who ran a cigar factory in the Philippines worked quietly to help 1,200 Jews flee to Manila.

The Frieder brothers never talked about their part in the little-known rescue. But some 65 years later, the remaining refugees want the world to know what Philip, Alex, Morris and Herbert Frieder achieved.

"The Frieder brothers were just ordinary Jewish businessmen, but they went out of their way to save lives," said Frank Ephraim, who was eight years old when his family fled to Manila from Germany in 1939. "No one made them do it. They just did what they thought was right."

The Frieder brothers, from the left, Morris, Herbert, Philip, Henry, and Alex, shown in a family photo from 1935 in Cincinnati, operated a factory in the pre-World War II Philippines that helped rescue 1,200 Jewish refugees from Nazi Europe. A new permanent exhibit will be created at the Holocaust Center to honor their efforts. (AP Photo/Frieder family HO

The brothers from Cincinnati had taken turns going to Manila for two-year periods during the 1920s and '30s to run the Helena Cigar Factory, started by their father in 1918.

While they were there, they established a Jewish Refugee Committee and worked with highly placed friends - U.S. High Commissioner of the Philippines Paul V. McNutt and Manuel L. Quezon, the first Philippine president - to help the mostly German and Austrian refugees get passports and visas, then find employment and homes in Manila.

"We were welcomed in the Philippines at a time when the gates to Jews were closed all over the world," said refugee Lotte Hershfield, 74, of West Hartford, Conn. 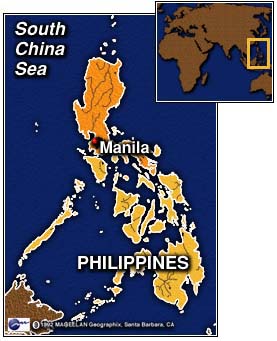 The rescue was little known until a recent book by Ephraim, "Escape to Manila: From Nazi Tyranny to Japanese Terror," led to efforts in the United States and the Philippines to honor the humanitarian effort before the aging refugees die off.

"Our numbers are dwindling, and I didn't want this story to be lost forever," said Ephraim, 73, of Washington, D.C.

Next Sunday, Cincinnati's Center for Holocaust and Humanity Education will honor the Frieder brothers, Quezon, McNutt and the Filipino people. At least 25 refugees and their descendants and nearly 100 members of the Frieder family will join relatives of McNutt and Quezon and the Philippine Ambassador Alberto Del Rosario.

Documents show the Frieders had hoped to bring as many as 10,000 refugees to the Philippines, but War World II intervened. They continued working in Manila until the Japanese invasion in 1941.

"Our children have asked why no one ever told them about this, but we were just kids then," she said. "After we came back to the United States, my father and uncles never talked about it. I think they just thought it was part of their duty, and they just went on with their lives."

Now the brothers' photos, letters and other possessions, along with those of the refugees, will become part of a permanent exhibit in Cincinnati. Part of the exhibit might be taken to the U.S. Holocaust Memorial Museum in Washington, and to Manila.

"We want to tell the world about the humanity of these men who did so much to save so many people and were never recognized," said Racelle Weiman, director of the Center for Holocaust and Humanity Education. "We hope it will make people realize that everyone can make a difference."

Manuel L. Quezon III said he is proud of his grandfather's role in the rescue. "In a sense, as president, he was implementing a national policy of the heart," he said.

A great nephew of McNutt, who also was governor of Indiana in 1933-37, didn't know about his role in the rescue but wasn't surprised.

"Paul had the chance to do many different things and always chose public service," said John Krauss, director of the Indiana University Center for Urban Policy and the Environment.

The brothers offered then-Col. Dwight D. Eisenhower a job in the rescue effort, but he decided to stay in the Army, becoming commander of Allied forces in Europe and then president, said granddaughter Susan Eisenhower.

The brothers have all died, but their family is grateful for the long-delayed recognition.

"We are all so proud of them," said Morris Frieder's daughter, Jane Ellis, 77. "But we wish they could be here to enjoy this."

thank you for posting this...a lot of people need to remember the past.

And as someone married to a Filippino, I am happy when people remember the stories of that nice country.

Thanks for posting this report!

Shameless! This article mentions nothing about the holocaust these brothers unleashed on the world with their cigar factory. {/sarc}

6 posted on 02/07/2005 11:21:22 AM PST by M. Espinola (Freedom is never free!)
[ Post Reply | Private Reply | To 5 | View Replies]
To: LadyDoc
Each time there is news item concerning those which assisted in the work of saving lives during the Shoah we should reprint these articles for the general public to review.

Sorry about that chief, rough day in the Monday markets, watching too many screens at once. :)