Are pupils at the world's first "gay" state school victims of segregation or symbols of progressive thinking? The majority of pupils at Harvey Milk High School in New York are gay and were bullied at their previous school for their sexuality.

Harvey Milk refuses to be classified as a "gay school" even though that is the general perception of it from opponents and supporters alike. But it says its unique brand of segregated education fully deserves its public funding.

It says it provides for a small population of victimised and bullied pupils who are made to feel so freakish in mainstream high schools that they are falling behind in lessons, too scared to go to school and missing out on a proper education.

Not everyone thinks this is a valid cause.

He feels making Harvey Milk an official, state-funded High School has been done behind tax-payers' backs - "on the sneak", as he puts it.

New York does not yet have a school for undersized people with bad eyesight. But minorities of many kinds are already catered for - children who aspire to be fire-fighters, pregnant teenage girls and pupils interested in "active pedagogy" such as rock-climbing.

There is no school sign on the outside One year after opening, the atmosphere inside the school is as unorthodox as you might expect. The Harvey Milk pupils I met were no shrinking violets.

They were self-confident, self-aware and vocal teenagers who seemed to be flourishing in the seclusion of this school.

And it is secluded. From the street, you cannot even tell it is a school. An anonymous entrance between shops and cafes in downtown Manhattan leads, via checks by security guards, to a lift which runs only to the third floor and opens up into a corridor of lockers with classrooms and offices off it.

Some pupils look like they could be at school anywhere, others don't. Two teenage boys in crop-tops with long, permed hair are having a heated but good-humoured exchange ("Don't go there, girlfriend!") with an older-looking black girl with a shaved head and heavy boots.

Vampira, 16 They're almost all Hispanic or black, from the worst-off areas of The Bronx, Queens or Brooklyn. They had to nominate themselves to come here.

For most of them, arrival seems to have brought a sense of release. Vampira, 16, says Harvey Milk has become "like my second family".

She says how relieved she is she no longer has to hide her sexuality. "Here you can just be yourself and nobody will talk and make stupid comments."

"I had my problems with people at my old school", says 15-year-old Chanelle. "It was the whole straight thing - the jocks, the football players and so on and, personally, I didn't fit in and I was missing out on my credits. I figured - get out of there".

Several pupils stress that they would never have made any academic progress without the school. Ninety-five per cent of Harvey Milk pupils graduate, compared to just over half high school pupils across New York generally.

The teenagers are frank about events that brought them here. Tanaja, a recent graduate, talks about her parents' horror the day she came out to them, aged 14. She comes from a family of strict Jehovah's Witnesses.

Her mother and father put locks on the bedroom door. They forbade her to have any physical contact with her younger brother and sister, who was four. She felt her only option was to leave home and Harvey Milk helped find her a place to stay.

Inside, just like any other school... Jazzy, 16, says he inadvertently "outed" himself to his mother the same day he discovered she was lesbian, but laughs now about the time they bumped into each other with respective boyfriend and girlfriend.

Critics of the school wonder how teenagers can be clear enough about their sexuality at such a young age, to ask for a place at Harvey Milk.

Josh Lamont, from the organisation Gay, Lesbian and Straight Education Network, which collects statistics for the US Education Department, says he's used to raised eyebrows when he tells people the average age of coming out is now fifteen. " A generation ago that figure was closer to twenty-one," he says.

Others who oppose the school, including gay rights activists, say creating a new form of gay ghetto is no way to encourage integration and understanding. In the real world, they say, gay and straight people have to learn to co-exist.

But some disagree. More than once, Harvey Milk's pupils have had to walk through groups of protesters on the pavement outside.

They have had insults hurled at them by angry members of the public brandishing placards saying "God Hates Fags" and "Go to Hell Harvey Milk Students".

At very least, Harvey Milk gives them strength in numbers. They ignore the protests and go to school.

...and we (will) have Arlen Specter as chairman of the Senate Judiciary Comm. to boot.

3 posted on 11/19/2004 6:47:09 AM PST by jla
[ Post Reply | Private Reply | To 1 | View Replies]
To: AngloSaxon
Inside, just like any other school... Jazzy, 16, says he inadvertently "outed" himself to his mother the same day he discovered she was lesbian, but laughs now about the time they bumped into each other with respective boyfriend and girlfriend.

Why is that not surprizing? 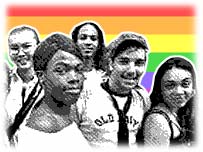 Imagine being a straight kid and being sent to this school by your enlightened liberal parents.

"Imagine being a straight kid and being sent to this school by your enlightened liberal parents."

LOL! You'd get very good at walking with your back to the wall!!!

It's the White thing to do.

10 posted on 11/19/2004 11:56:58 AM PST by quietolong
[ Post Reply | Private Reply | To 5 | View Replies]
To: AngloSaxon
Josh Lamont, from the organisation Gay, Lesbian and Straight Education Network, which collects statistics for the US Education Department, says he's used to raised eyebrows when he tells people the average age of coming out is now fifteen. " A generation ago that figure was closer to twenty-one," he says.

From Tammy Bruce, The Death of Right and Wrong:

"The radicals in control of the gay establishment want children in their world of moral decay, lack of self-restraint, and moral relativism. Why? How better to truly belong to the majority (when you're really on the fringe) than by taking possession of the next generation? By targeting children, you can start indoctrinating the next generation with the false construct that gay people deserve special treatment and special laws." (Pg.88)

"I believe this grab for children by the sexually confused adults of the Gay Elite repesents the most serious problem facing our culture today." (Pg.94)

"Between GLSEN, the Happy Penis, Phil, and now Kami, I'd say the Gay Elite have your children as a captive audience. Whether you like it or not, they have appointed themselves your children's moral tutor." (pg.119)

Viacom and others have created a culture thru it's media outlets that actually encourages young girls to experiment.

There is much less stigma attached to being lesbo these days if only temporarily.

They have tried to do the same with male homosexuality and while they have bombarded us with it to try to dull the coarseness of it, they have failed. Straight men simply do not "play homo" very often....quite rare.

I am convinced that the entertainment media must have at least 20-30% homosexual employees in the creative and maerketing ends...their fingerprints are on everything.

There should be labels on videos to warn us if it has homoerotic content. I get very tired of it.

A major peeve of my very non-prude wife.

And now Blockbuster has bought Hollywood video....less choices soon to come.....when Huzienga owned BB, they were a bit more prudent.

One could look at this as a quarantine. In essence, maybe they should be isolated like an infectious organism. One can never be completely free of vice one can only insure that particular vice does not infect the healthy portions of society.

More on the sick "gay kids" school in NYC, paid for by tax dollars. Even Tammy Bruce thinks this school is a very bad idea. That young adolescent kids' sexual desires and attractions are fluid and changeable. Many of these kids could have been helped to become normal adults, with families and marriage.

Now they're condemned to a life of strident "gay" identity.

Note the over the top slanted bias of the artilcle. Phelps was there? The implication is that any opposition to the "gay" agenda is motivated by psychotic hatred. These people are trembling and drooling to see "hatespeech" laws enacted.

Let me and ItsOurTimeNow know if anyone wants on/off this pinglist.

Public schools have no right to promote the gay ideology and impose this on children and create a gay ghetto. Adults can do what they want, but to encourage children to do this is just wrong.

Wouldn't this be called reverse discrimination?