In an extraordinary expression of angst and despair, hundreds of John Kerry supporters have participated in a website designed to send a giant "We're sorry" to the world for having allowed President Bush to be re-elected.

Sorryeverybody.com attempts to send the message to the world that Americans aren't "any more jingoistic or xenophobic than people in other countries," according to the site's founder.

Says an FAQ page on the site: "Rarely do people on the Internet apologize. I thought it was high time. The world needs to understand that there are people in America who don't like what our government is doing. And from the mail we're receiving, there are people in the international community who appreciate this.

The site includes to date over 180 separate pages of photos from participants, making a total of over 1,000 contributions.

The site claims apologizing to the world for the election is not a sign of weakness, but rather "a sign of courage and strength."

States the founder: " I want to give people a place to express their sympathy with the dismay of the rest of the world at this election result."

The site includes a page where apology givers can upload their photo for inclusion. Besides Americans, some foreigners are submitting images to empathize with the participants.

The messages are, for the most part, written on sheets of paper and held up in front of the contrite American. Some of the messages included are:

"I'm so sorry. I did everything I could."

"2 nations under Bush's God. Sorry everyone!"

"Dear World, I would like to apologize on behalf of my country."

"Half of Ohio is really, really sorry. Don't hate us."

"Dear World, Sorry, I never knew that 51 percent of us could be so blind."

Obscenity is fair game on the site, with one submitter saying, "We're f---ed and we're sorry."

One woman from the UK chimed in with her own message: "I'm from England and I feel sorry for you. Thx so much for doing everything you could."

A French citizen submitted a map of France with a note reading: "You will always be welcome here!"

Many posters talked of desires to leave the U.S. for the next four years. One woman held up a sign that read: "I would love to come and stay somewhere for four years. But I can't leave and expect those who don't have that privilege to survive. They need us here."

Bobby Hatam of Rocklin, Calif., a Bush supporter, created a mosaic of filmmaker Michael Moore using the photos of the website's participants. Moore, the anti-Bush producer of "Fahrenheit 9/11," made a mosaic of the president the day after his re-election using images of soldiers killed in Iraq.

"I think America will get a kick out of it," Hatam said, referring to the people in her mosaic as "the haters."

Besides accepting photos for the site, the person in charge of it, who is not identified, solicits for donations. He or she says all donations not used for general operating expenses will be given to "international charities."

What a bunch of losers.

werenotsorry.com is pretty good too.

The World should also recognize that 51% of America will not apologize for their vote casted for Bush, and those who apologized do not represent the majority of USA. 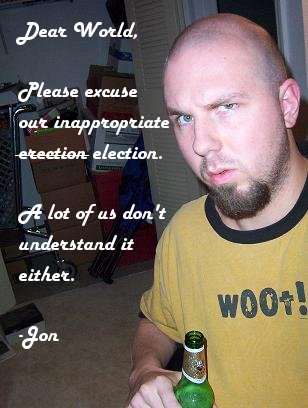 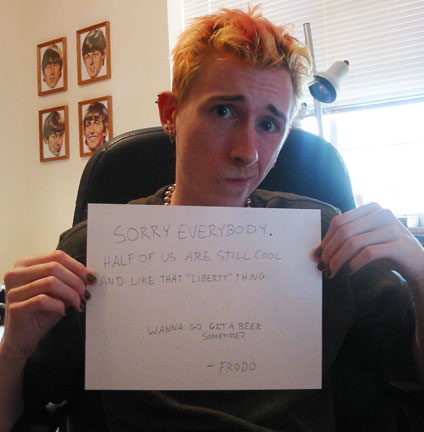 I'm just happy they aren't on our side!

They are a sorry excuse for human beings.

What are they sorry about, that someone is doing their job and following their oath of office?

And we all thank God for that...

I get the impression that this is a joke and these guys aren't sorry.

Now this is a site that needs freeped.
Post your pro America, pro Bush pics. :-)