The French regard Yasser Arafat as a hero rather than a terrorist, according to a new poll.

Asked to choose whether the Palestinian Authority chairman is a "hero of national resistance" or a terrorist, 43 percent chose the former and 27% the latter.

Ten percent said Arafat fit into both categories, while 9% said he was neither.

In addition, 34% said they had more sympathy for the Palestinians, as opposed to 13% for Israel.

Guess the French didn't learn anything from Hitler and WWII. I hope we don't save their sorry A$$es the next time they get into trouble.

They see Jerry Lewis as an intellectual, as well.

Your with us or against us.... I have no problem putting them on the Axis of Evil dam girlie men.

"On February 29, 1704, a party of French and Indian raiders
descended on the Massachusetts village of Deerfield, killing fifty residents and
capturing more than a hundred others. A force of more
than two hundred Frenchmen, Abenakis, Hurons, Kahnawake Mohawks,
Pennacooks, and Iroquois of the Mountain overran
the northwesternmost village of the New England frontier.
The attackers took 112 men, women, and children captive.
The book Captors and Captives: The 1704 French and Indian Raid on Deerfield (Native
Americans of the Northeast) by Evan Haefeli, Kevin Sweeney
follows the raiders and their prisoners on the harsh
three-hundred-mile trek back to Canada and into French and Native communities."

French missiles given to Saddam, found by the heroic Poles, and to protect France, blown up.

The Axis of Evil Froggies said they did not say "2003". LOL. Read here and decide for yourself.

Today: France [NOT] "protecting" its people from billionaire
terrorist Yassir and Suha Arafat and their murderous French terrorist helpers in murder before-the-fact.

25% of the country is sane and the rest has either lost it or never had it.

Most Americans see Frenchmen as morons, too!

Sure they did ...collaborated and hand over the jews

This is to be expected. The French get CNN International. 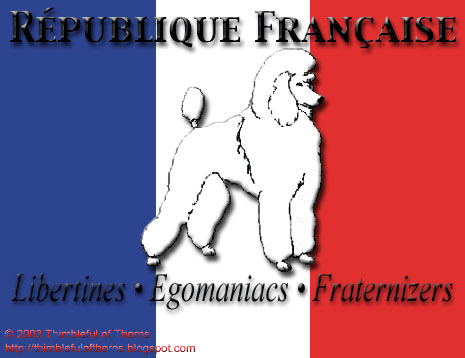 Proudly continuing a French tradition going back more than half a century:

12 posted on 11/08/2004 5:28:45 PM PST by KentTrappedInLiberalSeattle (I feel more and more like a revolted Charlton Heston, witnessing ape society for the very first time)
[ Post Reply | Private Reply | To 1 | View Replies]
To: Ahriman

.....and just when you thought they could sink no lower, down they go.

Any nation that, collectively, is afraid of its own shadow WOULD side with such a ruthless murderer. I only hope that, in a dying gesture, Arafat rids the world of Chirac...then dies a painful and agonizing death himself.

If it wasn't for the USA the French would have long ago taken the route of the Passenger Pigeon. (And would have been missed even less)

Libération is a leftist paper... So I would expect this poll to be the Zogby-equivalent of French polls...

Most French outside the elites loath the Arabs (who they call ratons, rats)...

It always amazes me that CNN International is WORSE than CNN. I go back stateside and wonder if ANY Americans would watch CNN if they knew what dreck that channel is serving up about the U.S. outside the borders.

And these are the people who backed Kerrry.

It is really scary that he got as many votes as he did.