Title and link only for USA Today.

TOPICS: Breaking News; Business/Economy; Constitution/Conservatism; Crime/Corruption; Culture/Society; Government; News/Current Events; Politics/Elections
KEYWORDS: dnc; hellzapoppin; joelockhart; kerry; napalminthemorning; rathergate; seebsnews; stainedbluememo; terrymcauliffe Navigation: use the links below to view more comments.
first 1-20, 21-40, 41-60, 61-80 ... 241-248 next last
This is huge. Woke up Fox and ABC friends with this and they (both conservatives0 said "You have got to be kidding!!!!"

Speaking as an old TV reporter, this is the point where the actions of CBS become completely indefenseable.

Arguments about "not knowing, etc." could be made up to this point, but this speaks to malice of forethought and going way beyond any journalistic bounds.

This IS the smoking gun.

Is anyone to assume that Mapes, a CBS employee, acting for the network, did not disclose details of story to Lockhart BEFORE story aired? That is an incredible no no in journalistic circles. Kerry operatives in Georgia disclosed details to Atlanta reporters before it aired. How did they know?

The question now is, when did Rather know this?

Nothing before this could have cost Rather his job.

I think that Fox News shall inherit the Earth.

This scandal is so huge -- it's hard to hold it in your mind. 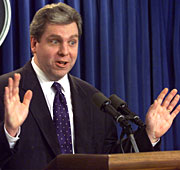 4 posted on 09/20/2004 10:33:35 PM PDT by The South Texan (The Democrat Party and the leftist (ABCCBSNBCCNN NYLATIMES)media are a criminal enterprise!)
[ Post Reply | Private Reply | To 1 | View Replies]
To: Admin Moderator
I know this has been posted in other forms, but strongly suggest leaving in Breaking.

Cannot over emphasize the importance of this. This shakes CBS to the core. Competitors will be ALL over this, as will affiliates.
5 posted on 09/20/2004 10:35:32 PM PDT by MindBender26 (Dan Rather should simply go away quietly, forever.)
[ Post Reply | Private Reply | To 1 | View Replies]
To: MindBender26

The Kerry team needs to be held accountable too!!!Please RNC step up to the plate!Kerry and CBS knowingly altered facts in order to tamper with the election. They are criminals!!!!!

And, after hearing all of this, Terry McAuliffe had this to say:

"The American people already know that strings were pulled to get President Bush into the Guard; and while in the Guard he missed months of service and was grounded. ... But what we still don't know is why Bush didn't fulfill his duty to his country or why he has continued to lie to the American people about it,"

Real smart answer, Terry. Joe Lockhart, former Clinton press secretary and an ass of a guy, McAuliffe, Clinton's hand-picked guy to run the DNC. Are these guys tanking this election to help out Hilary? There can be no other explanation.

And, by the way, when should CBS have to file as a 527 so we can insist they no longer have contact with the Kerry campaign?

9 posted on 09/20/2004 10:37:11 PM PDT by lazlohollyfeld
[ Post Reply | Private Reply | To 1 | View Replies]
To: MindBender26
BTT. The cynical among us - that's me, folks - have been wondering at the simultaneity of stories on this topic from a number of different sources. It's almost as if - well, it's silly, I know, because the DNC would never do anything so unethical, but it's almost as if it were coordinated by someone or other.

Gotta be Karl Rove. The fiend!

This is what we figured from the get-go, wasn't it? Boy, the minute the Clintonistas got into the mix, it all got unravelled.

Ummmm ... Why is CBS giving out important peoples phone numbers???

This is the Democrat's Watergate! Now let's pray that Woodward and Burnstein still have a little fire in the belly, and that they are willing to do their treatment to fellow Demo-rats. I'm not holding my breath, but this could be another Pulitzer for them.

ABC is already gleefully running with it. They're going to be the first rabid dog to take CBS down. Per the ABC Radio News headliner: Well, things just keep getting worse for CBS.

And it just so happened that the "Fortunate Son" advertisements by the DNC were set to air, oh, just about the time Rather ran his story. What a coincidence!!!!

OH, I pray, I pray this will be ending up in Kerry camp or DNC being PROSECUTED!!!!
Does anyone have any hope of this , or since SeeBS admitted docs aren't valid, and hoping to move forward with no more discussions? To put it "behind" them?????
I am just scared this will fade away, without the real devils having to pay the piper. And the old Texan taking the fall, the dems getting away with it again, please anyone, give me some hope.