* First of all, we have to be clear about something: Vice President candidates have not made a difference in a President election since 1960 -- 44 years ago -- when Lyndon Johnson helped John Kennedy carry Texas as well as Georgia, Louisiana, North and South Carolina and about half of Alabama.

* If you think that's not true, consider the election of 1988. In that year, the Democrats were quite smug about having Lloyd Bentsen of Texas as their VP nominee against Indiana Senator Dan Quayle (whom Bentsen claimed was no John Kennedy). Dan Quayle kicked Lloyd Bentsen's butt, 426 electoral votes to 111. And, by the way, Quayle got about seven MILLION more popular votes than Bentsen.

* Or, do you think that two guys named George H.W. Bush and Michael Dukakis had something to do with it?

* But, it is the time of the cycle to talk of these things, so far be it from me to spoil the fun.

* First, huge kudos to the Republican National Committee's research operation. At 9:17 yesterday morning an e-mail went out from the RNC as follows:

*Washington, DC- John Kerry was against John Edwards before he was for him. But now he's his running mate. Who is John Edwards? A disingenuous, unaccomplished liberal and friend to personal injury trial lawyers.

* That were just one of nine e-mails the RNC cranked out by 5:51 pm. I love it. Let the games begin.

* The theory on Edwards is that he can help win some Southern states to balance against Senator Kerry's strong, liberal Massachusetts background. Let's go to the video tape.

* Edwards won just one primary -- South Carolina -- and he only got 45 percent of the vote doing it.

* Kerry beat Edwards in Florida (where Edwards got an astonishing 10% of the vote); Mississippi (Edwards, 7 percent); and Georgia where Edwards got 41% but was supposed to win and when he didn't, he dropped out of the race the next day.

* To demonstrate Edwards' non-regional vote-getting ability, he got 13% of the vote in the important swing-state of Michigan and repeated his Mississippi performance in Washington State where he drew another 7%.

* Tell me again about his vote-drawing power? What am I missing?

* That's a disappointing 85 electoral votes to get North Carolina's 15.

* Note that none of the "finalists" were women nor people of color. Edwards happens to be a White, Southern male. Where's the diversity in that?

* You have Edwards, with his own political operation in place, who will be expected to play second fiddle to Kerry, who has already put HIS guys in place to run the VP campaign.

* Here's what we know about United States Senators: They don't play nicely with others.

* Here's what we know about Trial Lawyers: They don't even play nicely with themselves.

Dear Mr. Mullings: We had this conversation with you just last week. THIS IS YOUR FINAL WARNING! Signed, The National Anti-Double Entendre Association

* Oops. Sorry. I didn't mean it come out that way.

* In talking with Democratic friends in Your Nation's Capital today, I asked why Senator Kerry would take some of the zing out of his convention by announcing his choice for Veep three weeks early. How can you make it newsworthy again?

* Because I AM a team player, I have a suggestion for the Kerry/Edwards campaign: On the third night of the convention, have Edwards announce ...

* On the Secret Decoder Ring Page today: Links to the election results from the 1960 campaign as well as the 1988 campaign, plus a link to the Republican National Committee's John Edwards Research page.

"....the Democrats were quite smug about having Lloyd Bentsen of Texas as their VP nominee against Indiana Senator Dan Quayle (whom Bentsen claimed was no John Kennedy)."

Regardless...He is right about his main point: VP candidates, ultimately, don't have much impact upon the election of a president...Unless one wants to argue that Bush's pick of Dick Cheney guaranteed Wyoming's crucial three electoral votes. Kerry picked a guy who wouldn't have carried his own state had HE been the presidential nominee. The race comes down to Bush or Kerry....who runs as VP will have little to no effect (unless, of course, Cheney bows out and Bush picks Condi Rice).

But what I love most is, Edwards was against Kerry before he was for him. It wasn't so long ago that Edwards was ranting and raving there was no way, no how, that he would play second fiddle to Kerry. So now who's the liar Flip Flop King?

Frankly, I'm glad the puter was in the shop during the big announcement and all the hoopla accompanying it. I don't care a fig about Kerry so certainly couldn't care less who's running with him. Bush has it in the bag and the bag was hand-sewn by Shrillary. 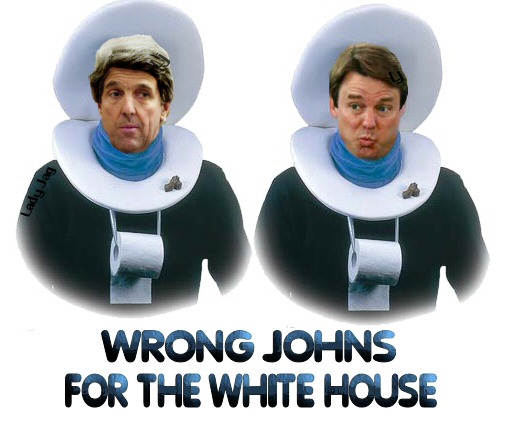 With the way they both flip-flop, it would be fun to have an animation with the lids changing from up to down all the time.

Yeah, like jack-in-the-boxes with crank handles on the sides...pop go the weasels! 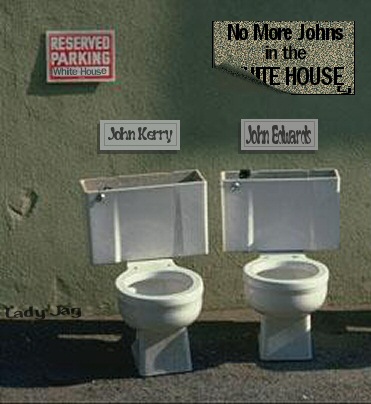 That should be in a flash video. The Legend should be:

That would encourage people to say, "P*ss on them.", in reference to Kaptain Ketchup and 'Pretty Boy' Edwards.