June 21, 2004 -- CHELSEA Clinton's chic new look is turning heads. With her sleek, honey-blond coif and understated but deftly applied makeup, the former first daughter has undergone a dramatic transformation from bookish collegiate to soign‚e sophisticate - sparking rumors she had help from a plastic surgeon. Not so, counter a panel of insiders - who insist the 24-year-old's new urban-cool polish is the result of flattering makeup, soft golden highlights and a layered haircut that aspiring look-alikes have already christened "The Chelsea."

"I don't think she's had any surgery," says Dr. Z. Paul Lorenc, a Manhattan plastic surgeon. "The proportions of her face are the same ...

"She's an example of good aging, good skin care - she's just turning into a beautiful woman. She has strong cheekbones, beautiful eyes and an overwhelming smile."

Laughing off reports that Chelsea had a chin-lift and a nose job - or both - makeup artist Robin Narvaez, who has applied Chelsea's makeup for special occasions, including Bill Clinton's 50th birthday party, reveals the skinny on the tricks of the trade that sparked the scalpel-speculation. 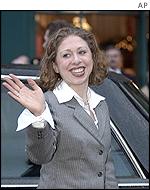 ok, the new make-up can hide a lot of flaws, but the nose and chin are OBVIOUSLY scalpel-induced!!

I can't believe that she took the one attractive quality that she had - her beautiful curly hair - and got rid of it.

She cant help who her parents are, it would be great to see her rebel against their political beliefs. But, she probably shares them. I really dont know.

Looks like she's had a few thousandths taken off the lips too.
And, she can still eat corn on the cob through a chain link fence.

71 posted on 06/21/2004 11:14:56 AM PDT by prairie dog
[ Post Reply | Private Reply | To 9 | View Replies]
To: ChevyZ28
What amazes me is that nobody has noticed the most obvious indication that she has had some kind of bizarre cosmetic surgery . . . She's got a goofy-looking man's head growing out of her right shoulder.

Well, except for her supposed phone call to her mother on 9/11 to worry about the effect of the Bush tax cuts!

Sorry, but I think we are seeing the literal grooming of the next generation Clinton's foray into political office - ChelSay anything to gain power like her parents.

Soon as she meets the age criteria for an elective office, she'll be run and we all know who will be her campaign manager. They won't go away!

Web must be proud.

According to the article, the look is a result of combining a highlight-concealer under the foundation and a glossy lipstick.

I'd say a that's probably true (after the plastic surgery was done).

I think she looks great. I dont know if she's had surgery or not, who cares? I'm happy for her. I cant imagine being in the public eye and knowing people are constantly judging your looks just because you happen to have horrid parents.

and scroll down to the colored picture of the Poor Pitiful Pearl doll.