His divorce has been final for only six months, but already Sen. John Kerry has acquired a first-class rake's reputation in the rarefied world of rich, handsome, young bachelor senators.

To hear the gossips tell it, the tall, dark-haired former Navy officer with the surgically improved chin has been cutting a swath through the ranks of America's most available young women, inspiring both admiration and envy among the capital's preening young singles.


There was the lithesome, British-born researcher for ABC-TV, Emma Gilby, whose long affair with Kerry has left her speechless about it. "There's just nothing I want to say about it," she said.

There was also Morgan Fairchild, the movie actress whom Kerry reportedly courted on the Q.T. while dating another woman.

More recently, there was Catherine Oxenberg.

His long love affair with Boston attorney Roanne Sragow collapsed under the weight of repeated press allegations of simultaneous love affairs Kerry was conducting with Sragow and other women, most notably Fairchild 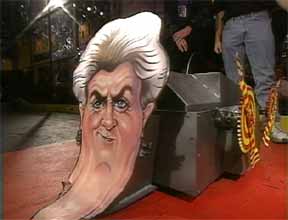 I don’t want Kerry to win either.

In fact, Kerry has long admitted that he had corrective surgery to his jaw in the 1970s - only he maintains it was to fix a bite malocclusion that he's had since childhood, as aides told The Hill earlier this year.

Or, as Kerry himself told Vanity Fair magazine back in 1996, he had surgery on the area in question after breaking his jaw playing hockey.

Commenting on the Vanity Fair revelation, the Boston Herald noted at the time, "The junior senator used to be a lot more - shall we say - lantern-jawed than he is today."

That same year the Boston Globe noted, "Washington gossip columnists have whispered about Kerry's once-bulging jaw - that he had plastic surgery to make it look more telegenic."

The Globe said Sen. Kerry carries a letter from his plastic surgeon testifying that his jaw surgery was medically necessary.

Oh my God! I just wet my pants over this one!!

ROFL. Can't catch a football either.

39 posted on 04/25/2004 5:04:31 PM PDT by Dan from Michigan ("12 hours outta Mackinaw City, stopped at the bar to have a brew.....")
[ Post Reply | Private Reply | To 34 | View Replies]
To: mass55th
Kerry supposedly had chin surgery many years ago, claiming he had suffered an injury to his chin playing hockey. But everybody knew it was an attempt to try to make himself more marketable.