If you want to know what's really at the heart of the Palestinian conflict with Israel, don't ask politicians or diplomats. Go to Palestinian children.

Unlike the rest of the world, they've been paying close attention to what their leaders and educators have been teaching. And they are ready to practice what they've been taught.

For instance, children interviewed on PA TV last week state without reservation that Israel has no right to exist, and that the goal for which they're willing to sacrifice their lives is Israel's destruction.

"They [the Jews] came to take Palestine, that is, Tel Aviv, Jaffa, Haifa, Acre, Ramle. All these cities belong to Palestine," one youth explains in a December 25 broadcast, echoing years of standard Palestinian Authority indoctrination.

And because he is convinced that Israel has no right to exist: "We hope, hope, hope, and I emphasize these things, that the Arab countries and the foreign countries – all the countries of the world – will support the Palestinians and will expel the Israelis.

"We must expel all Israelis from Palestine. Because Israel – there is nothing called 'Israel' in the world. The Israelis [came] from Holland, America, Iran."

The children are seen promising they will keep fighting, generation after generation, until they liberate Palestine.

Furthermore, they say they don't fear death in the struggle because it is shahada – death for Allah. "Even if all the Palestinian children, Palestinian youth, Palestinian women, and Palestinian men die, we will not surrender!"

None of this is surprising to anyone who has been paying attention to what does on in the PA educational system. Israel is erased from PA maps, schoolbooks and historians deny Israel's right to exist, and educators at all levels teach that Israel is a foreign colonial implant.

Despite PA claims to the contrary, its textbooks continue to delegitimize Israel and dismiss it as a foreign occupier: "Palestine faced the British occupation after the First World War in 1917, and the Israeli occupation in 1948."

Children are taught that all of Israel is part of Palestine. For example, "Among the famous rocks of southern Palestine are the rocks of Beersheba and the Negev...."

About Palestine's water sources, children are taught: "The most important is the Sea of Galilee."

SUCH MESSAGES of delegitimization have been affirmed by Prime Minister Ahmed Qurei. He is on record as rejecting the idea of Israel as a Jewish state. "President Bush said that Israel is a Jewish state, which is a cause for our concern. This should not have been said," he told Al-Nahar and Al-Hayat Al-Jadida on June 15, 2003.

PA-affiliated historians appear on educational TV to reinforce this message. On December 28, Dr. Isam Sisalem reiterated what he has said on numerous broadcasts. Jews "have no history or connection to this land" and are nothing but a "cancer" planted by Britain to control the Middle East.

In the same educational broadcast last week, another historian resurrected The Protocols of the Elders of Zion, the infamous anti-Semitic forgery, citing it as one of the foundations of the First Zionist Congress in 1897.

"The Zionist movement began at the Basel Congress to plan the exploitation of the powers' struggle, and the struggle of Europe over the Middle East," said Dr. Riad Al-Astal, a history lecturer at Al-Azhar University in Gaza.

Consequently, when we view children on PA TV who say they want to destroy Israel, to liberate Tel Aviv, Jaffa, Haifa, Acre, and Ramle, and to expel the Jews, we are seeing children who are accurately regurgitating the sentiments inculcated and reinforced throughout PA society.

Indeed, years of anti-Israel indoctrination have been alarmingly effective in teaching Palestinian youth that the Jews have no link to Israel, that Israel has no right to exist and that the overriding goal of the next generation – even at the cost of their lives – should be to eliminate Israel.

The essence of the conflict is Israel's very right to exist – not the question of borders or refugees. Peace negotiations that do not address the PA's system of indoctrination will be short-term paper agreements doomed to failure.

Palestinian children have already figured this out. Perhaps the rest of us need to stay after school. 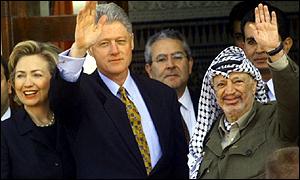 Hmmm.... I suppose I could live with a nominally defiant, but thoroughly extinct enemy...

6 posted on 01/06/2004 5:11:22 AM PST by Kenton (Yo-ho-ho and a bottle of Cuervo...)
[ Post Reply | Private Reply | To 1 | View Replies]
To: Diogenesis
That's Hitlary kissing the pederast Asser's wife, just after she gave an idiotic speech accusing IDF of gassing "Palestinian" children.

These lovebirds need to be reunited!

Obviously there can't be. After Oslo we are not likely to believe the Palestinians if they start issuing empty platitudes again either.

This is why I support unilateral separation on Israeli terms. To quote Ehud Barak, "us over here, them over there". It took the Palestinians to start a war, but finally Barak got it right. Unfortunately that happened too late.

Nevermind that Tel Aviv was nothing but sand dunes and crabgrass when the Jews came. Like most of what the Arabs claim, it was build from the ground up by the Jews.

13 posted on 10/16/2004 9:10:59 AM PDT by American in Israel (A wise man's heart directs him to the right, but the foolish mans heart directs him toward the left.)
[ Post Reply | Private Reply | To 1 | View Replies]
To: marvlus
How can there ever be Peace in the Middle East when the mindset is like this?

Oh but it is far worse than it seems. Muhammad stated that the Jews would wander the world forever without a land for corrupting the Bible, and also stated that for the Judgement day to come the Muslims must slaughter the Jews to the last man. Now either Muhammad is a false prophet because Israel does in fact exist, or the Jews are being "gathered" for the great and final "solution".

Guess which conclusion the Muslims came to. Islam can never allow Israel to exist and survive.

"for the Judgement day to come the Muslims must slaughter the Jews to the last man. Now either Muhammad is a false prophet because Israel does in fact exist, or the Jews are being "gathered" for the great and final "solution".

There will be a final solution alright....the Jehovah God will usurp the Muhammad god allah in the end. Israel will not be destroyed but flourish. Bet your life on that because the Word of Jehovah is as gold.