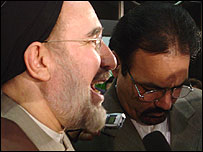 Iran's president is one of many leaders to oppose the ban

Iranian President Mohammad Khatami has called on France to review its proposed ban on overt religious signs, such as headscarves, in schools. "I hope the French Government, which claims to be avant-garde in liberty, equality and fraternity, will cancel this wrong decision," he said.

He told reporters that banning the headscarf would be "a kind of extreme nationalistic tendency".

Mr Chirac wants the ban, which would also outlaw the Jewish skullcap and large Christian crucifixes, written into law by the start of the next academic year.

Mr Khatami urged the French parliament not to approve the ban, which he described as being "against liberty and the guidelines of democracy".

The Iranian-born Nobel peace prize winner, Shirin Ebadi, has also voiced her objection to the ban, saying it would only promote Islamic extremism.

"If there is a law, only fundamentalists will profit from it," she said.

On Monday, the Egyptian Islamic group, the Muslim Brotherhood, said it considered the ban to be "an interference in the personal and religious freedoms of Muslims".

The group - which is officially banned in Egypt though some of its activities are tolerated - said the headscarf worn by Muslim women "is not a religious sign but a religious obligation".

The highest Sunni Muslim authority in Syria has expressed its "surprise at the ban".

"The Muslim nation sees the veil as one of the foundations of its religion," wrote Syria's Mufti, Sheikh Ahmad Kaftaro, in a letter to Mr Chirac. 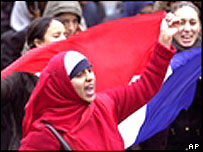 Hundreds have taken to the streets against the ban

The US Ambassador for International Religious Freedom, John Hanford, grouped France with a list of countries accused of abusing religious freedom.

In Malaysia, about 50 Muslims held a protest outside the French embassy.

One of the organisers, Salahuddin Ayub, of the Islamic Party (PAS), said: "This is a breach of human rights. There is no justification for the law."

A similar rally, attended by several hundred people, took place in Paris at the weekend.

TOPICS: News/Current Events
KEYWORDS: france; french; iran; rethink; scarf; urges
Kiss France goodbye, it's all over for them.
1 posted on 12/23/2003 2:59:23 PM PST by blam
[ Post Reply | Private Reply | View Replies]
To: blam
Oui oui. Time to surrender again. This could be fun to watch. Better beef up security around L'Arc de Triomphe, but don't expect any help from us. In fact, the whole headscarf issue should be decided by the UN, n'est-ce pas?
2 posted on 12/23/2003 3:04:21 PM PST by speedy
[ Post Reply | Private Reply | To 1 | View Replies]
To: blam
I thought Chirac wanted to do away with the wearing of headscarfs and skullcaps, then replace them with Star of David and Islamic Symbol tattoos so that the French will be ready for the next German Invasion.
3 posted on 12/23/2003 3:04:28 PM PST by Wooly
[ Post Reply | Private Reply | To 1 | View Replies]
To: blam
The Muslim nation sees the veil as one of the foundations of its religion,"

That has to be a joke.